After We Die: The Life and Times of the Human Cadaver 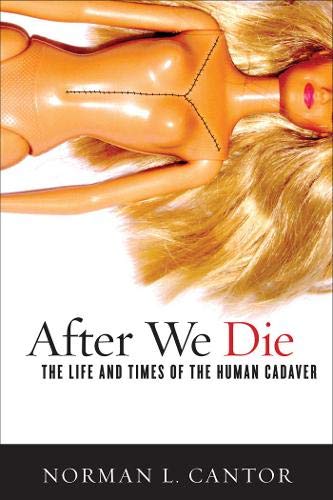 This 301-page book is an examination of what happens to a human body after death. The book is divided into four parts that address the status and rights of cadavers, the disposition of remains, the multiple roles of a cadaver, and abuses of cadavers.

An introduction describes the reasons for the author’s interest in cadavers, which began with a New Orleans-style funeral of a stepbrother, and the Ted Williams controversy, in which the former baseball player’s family argued about the disposition of his remains. One side wanted his ashes spread over his beloved Florida Keys, and another side wanted his body frozen until such time as a cure might bring him back to life.

The author, an attorney, wondered which variables are most important in dictating what happens to our bodies after we die. There can be several voices, including the wishes expressed by the decedent, which the author attributes to a cadaver’s quasi-human status. Mr. Cantor’s lawyerly curiosity was aroused.

The book goes into tremendous depth in each section, combining fascinating anecdotes along with ethical and legal discussions. The writing style is light, but the material is heavy, perhaps even off-putting to some.

Section one is a discussion of the rights of cadavers. A cadaver has the right to post-mortem human dignity as well as quiet repose. But the right to quiet repose can be violated to satisfy the needs of the living, for example in cases where the cause of death needs to be re-examined, DNA obtained to establish paternity, etc. Quiet repose can also be violated for less important reasons. In one case, a writer had enclosed love poems in the coffin of his wife as a gesture of eternal love. Years later, suffering from writer’s block, the author retrieved the poems. The book is chock full of similar interesting stories.

Before addressing the rights of the cadaver, one must first be sure that the body is indeed dead. There is a discussion of methods used to determine this, from the use of a crude stethoscope to the introduction of the EEG in 1968. The relevance of this issue is important as the misdiagnosis of death is not as uncommon as one would hope. Many cases are cited of “cadavers” waking up on their way to, or at their own funeral, as well as exhumed cadavers that showed evidence of having tried to escape from the coffin, obviously having been buried alive.

The book cites interesting historical information as well as ethical dilemmas. What defines death such that organs can be harvested from a person? Are anencephalic babies alive? The topics in this section are certainly fascinating, but sometimes the author’s discussion is lengthy.

This is an in-depth study of every aspect of cadaver-hood, and there are going to be areas that do not captivate a given reader. Knowledge of history is helpful as there are frequent references to historical figures.

Part two deals with the disposition of remains of the cadaver. The history of burial, embalming, and cremation are all addressed. The section contains many interesting tidbits, such as the fact that an unembalmed adult body without a coffin takes five to twelve years to decompose to a skeleton. A coffin does delay this process, but it becomes apparent that the purpose of the coffin is really to create a pleasing memory picture for the survivors at the time of burial.

The introduction of cemeteries is discussed, including the segregation even there, and the movement to above-ground mausoleums, often an indicator of wealth and social status of the dead—including the $1.4 million mausoleum of Leona Helmsley resembling the Parthenon.

Burial at sea is reviewed, one case describing a husband who was buried at sea to spite his wife, who had vowed to dance on his grave. For completion, disposal of ashes in the air as well as in space are addressed, along with plastination and cryonics. There is an interesting discussion of the legal issues that would present should reanimation become possible.

Cremation began in Greece in 1000 B.C.E. but did not become popular in the United States until the mid 1800s, largely for sanitary reasons and to avoid the plague of body snatching for dissection.

Details of the embalming process and its evolution are described vividly. Again, entertaining anecdotes abound, including one of what may have been an early prenuptial agreement. A man had agreed to control his wife’s fortune as long as she remained “above ground.” Upon her death, he had her embalmed as well as could be done at the time, and kept her above ground, in her drawing room, where presumably he could continue to control her fortune.

The modern embalming process is very invasive, but the funeral director’s primary goal is to make the body presentable for viewing, as if it were in restful sleep, as it is often the last image of a beloved. The description of the embalming process sounds in many ways like a day at the spa. The sole purpose is to improve appearance.

Part three deals with the direct contributions of a cadaver, predominantly those to education, transplantation, and research. There are thorny legal issues surrounding these topics and they are addressed in some detail.

Unfortunately, the supply of suitable organs has not kept up with the need for them. The waiting list of people who need organs continues to grow, and the number of people dying of organ failure increases for a variety of reasons which are discussed in After We Die. Various approaches to decrease the gap between those who need organs and the number of available organs have been tried, including the sale of organs and the use of organs from executed prisoners. These approaches and the reasons for their general failure in our culture are addressed in a detailed discussion. It is clear that this is an area where more successful non-medical approaches are needed to save more lives. Ideas are explored, including making organ donation a default position, rather than an active choice on documents such as drivers’ licenses.

The cadaver’s role in education and research is also examined. Historically cadavers have been used to train both physicians and artists through public dissections to maximize the exposure. This technique is still used in medical education courses.

Autopsies have been a source of tremendous gains in knowledge in medicine, but their use, along with their benefit, has declined as they are labor intensive, not fairly reimbursed, and are a source of exposure to communicable disease. The autopsy rate in nursing homes is less than one percent. Sadly, this is not likely to aid research on dementia and other disease of the elderly.

The final section deals with abuse of the cadaver. Since cadavers provided the best source of medical education, there existed a great need for cadavers that was unmet from 1780 into the late 19th century when “anatomy laws” put an end to the quiet repose to which buried cadavers were entitled. Attempts to meet this need included the use of hanged criminals and then the popularity of grave-robbers, or body-snatchers, who were often medical students or practitioners. The pay was good enough that some chose to streamline the process by murdering people to obtain bodies to sell to anatomists and physicians. Defenses against body-snatchers consisted mostly of having the cadaver observed until it had decayed enough that it was no longer suitable for dissection. Body parts continue to be stolen and sold in the black market.

Mr. Cantor illustrates various other treatments of cadavers that could be seen as disrespectful and repulsive, or respectful and an honor to the corpse, depending upon the culture and circumstances. In one instance, a tribe in New Guinea would eat the brains of deceased relatives. This practice was meant to honor the dead but resulted in the passage of a deadly virus from which many New Guineans died, ending the custom.

The use of body parts is also subject to the desires of the decedent. Mr. Cantor approaches dilemmas such as the poet who wanted his skin to be used to bind a volume of his verse. Although controversial, this is very different than the use of the skin of Jews, killed by Nazis, to make lampshades.

Again, there are numerous, fascinating examples of similar situations, an effort to elucidate what comprises indignity and how much of a role human choice plays in it. These include ingestion of human remains, necrophilia, and public display of corpses and body parts, whether ancient or recent, as in the current popular traveling exhibits of plastinated bodies.

After We Die is a fascinating study of cadavers, presented in great detail. It is aimed at readers with an interest in serious books about bio-ethics and medico-legal controversies.

Nonetheless, sections that are not of interest can be skipped without losing the flow of the book. Each section could even be read by itself. The author has a tendency to use many abbreviations, and I found myself frequently going back to look up an abbreviation. Although the legal and medical issues are dealt with in quite a bit of detail, they are presented in a way that makes them accessible to those who don’t necessarily have expertise in the fields.

Although death is a universal experience, few of us have looked beyond the simple choice between burial and cremation. For those who share the author’s curiosity, Mr. Cantor has provided and informative, thorough, and often entertaining explication of the fate of our bodies.

The text of the book is followed by sections of notes and a bibliography.

Dr. Daniel A. Graubert is a retired physician and the former Director of Interventional Pain Medicine at Dartmouth-Hitchcock Medical Center.