After the Holocaust the Bells Still Ring 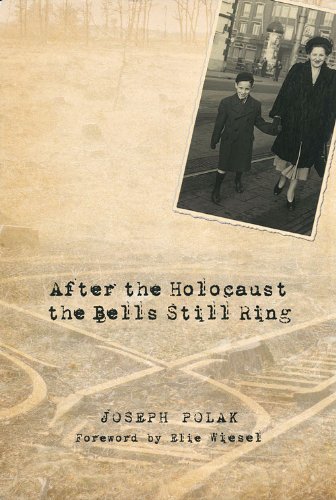 Joseph Polak is from the same nation as Anne Frank, The Netherlands. As Jewish children, they are taken captive by Nazi Germany, deported to Westerbork and then to Bergen-Belsen, where Anne dies from typhus. Joseph has the rest of his life to make sense of the Holocaust, to find a way to re-connect with a God painfully absent from the destruction of his people.

Joseph is an infant when he and his parents are forced onto Nazi train transports and sent to Westerbork. Joseph’s father dies shortly after their next train transport. He and his mother face years of starvation, brutality, and deplorable conditions. They, along with other Jews, await final transport to a Nazi death camp.

At Westerbork, the family discovers that Nazi Germany has forced committees of Jews to create transport lists to carry other Jews to the death camps. These committee Jews were forced to decide whether to send their own children or to send the children of other families to their deaths.

The author also notes that while about 50% of the Jews in Germany, France, Belgium, and other Western European countries perished under Nazi control, about 90% of Dutch Jews died.

After the war, the government of the Netherlands forced surviving Jews to prove that they were parents of children who survived in a different location. These starved, sick, beaten Jews escaped without a scrap of clothing, let alone birth documents for their children. After a harrowing, heartbreaking manhunt across Europe to find their children, parents discover that the Dutch government is forcing the children to remain in orphanages or with foster parents.

Arriving at their homes, the Jewish survivors find neighbors or strangers living there who refuse to leave. In most cases, it was these very neighbors who turned in the Jews to the Gestapo two or three years earlier.

Joseph’s earliest memories of Bergen-Belsen include playing hide and seek among mountains of skeletal bodies. The constantly increasing piles of corpses, stacked like so much cord wood, are ubiquitous, like the pervasive stench of death and the endless agony of starvation. This are among Joseph’s earliest memories. Happier times in The Hague are gone, replaced by sickness and death.

After liberation, Joseph and his mother struggle to reenter the world, battling serious physical ailments and a society that does not want to hear or think about Nazi concentration camps survivors. After living among corpses and terror, they must quietly push back against the demons of their past, while the reanimation of those horrific memories await every night in their sleep.

Many Holocaust survivors leave God far behind. They ask what deity could allow his “chosen people” to be so dehumanized, disparaged, degraded. What sort of God allows Nazis to force His devout people to watch as their loved ones are killed, before they are also murdered? What God allows His people to be starved, raped, brutalized, and forced into gas chambers by the millions, without preventing or stopping it?

After the horror, Joseph decides to pursue a career in which he might find answers for the Holocaust—a way to comprehend how and why people can behave so terribly. Joseph also seeks to understand God’s role in the terror and genocide. So he becomes a rabbi.

Joseph eventually realizes that he will be one of the last Holocaust survivors, one of the final firsthand witnesses to the horror. But to do so, he must find a way to recall those long-ago events that so terribly impact his life and his mother’s life. Not only is Joseph attempting to recall specific events that took place when he was a toddler, he is also struggling to define something virtually without description; to recall events that defy sanity.

Joseph Polak is an outstanding writer. His memoir is an essential contribution to Holocaust literature. In unadorned language, Polak presents the story of a young boy who witnesses terror and horrific circumstance that would be difficult for anyone to recall and describe.

In this brief volume of work, Polak describes how he and his mother suffered, but also how he eventually becomes a rabbi, teaching the Torah to his progeny. Having lived for years among rotting corpses, having survived that which is not survivable, he returns to God and finds a pathway to understanding.

This fast-paced, brief memoir reads like a novel. It is haunting and melancholic, unforgettable and poignant. Polak is a wonderful writer, proffering a terrifying truth while speculating about the wisdom of the Torah and the apparent absence of God. He describes physical and spiritual survival at its most visceral level. He is instinctive, instructive, and intuitive. Beyond a physical deprivation and suffering that few humans can endure, Polak teaches us about the cognitive and spiritual toll that survival demands—essential ingredients for making sense of that which defies understanding.