After Hitler: The Last Ten Days of World War II in Europe 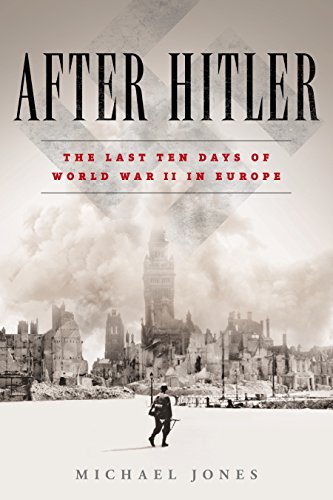 “a brilliant exploration of the final days of the European theater, valuable in its military analysis and generous use of eyewitness accounts.”

“What a diff’rence a day makes,” sang Dinah Washington in the popular song. After Hitler: The Last Ten Days of World War II in Europe by Michael Jones explores what a difference ten days made in the fate of the continent.

Jones, a Fellow of the Royal Historical Society and a member of the British Commission for Military History, has written extensively about the topic. He has written four volumes on the Second World War and two books profiling pivotal battles in English military history (Bosworth and Agincourt). He brings this expertise to bear with a keen eye toggling between enormous army movements cutting across the German landscape and the individual stories told by soldiers, diplomats, and world leaders.

By May 1945 Germany seemed on the brink of total collapse. German cities now looked post-apocalyptic, rubble and bodies strewn about. The Nazi regime, brought low after a series of foolhardy strategic decisions and Hitler’s monstrous ego, faced a war on two fronts. The British and American forces charged across the French countryside while Stalin’s Soviet forces sent wave after wave of men and machines overwhelming the German forces.

After Hitler begins at the very end, with Hitler signing his last will and testament. He committed suicide with his new wife Eva Braun and handed over the reins of power to Admiral Karl Dönitz. Recognized by no foreign power, the Dönitz regime existed in the political twilight, offering a thin veil of legitimacy to The Third Reich’s dwindling territory.

After Hitler committed suicide, The Third Reich’s territorial domains only included a slice of land running through central Germany, a larger swath including Austria and Czechoslovakia, and isolated “fortress cities” of Breslau, Danzig, and, ironically, Dunkirk.

The final moves of the Second World War took on a more political cast as the Western Allies and Soviet forces conquered more and more land. Prime Minister Churchill, a lifelong anti-communist, saw siding with the Soviet Union as an alliance of convenience. Unlike FDR, President Truman had a more jaundiced view of the Soviet Union.

Jones chronicles how Nazi duplicity and a journalist’s leak precipitated Europe celebrating V-E Day on two separate days. The Nazi leadership did everything in its power to surrender to the Western Allies, fearing Soviet reprisals. This is because the Nazi leadership decided to fight their war in Europe with a moral double standard. In the West against France and the Low Countries, they engaged in military conquest and collaboration. On the Eastern Front, they fought against the Soviet Union as a war of genocidal extermination.

Jones focuses not only on the tragedy of Poland but the similar tragedy of Czechoslovakia. “Prague was the last major European capital to be liberated, and the city lay between advancing American and Russian forces. On May 4 General George Patton’s Third Army had advanced into Czechoslovakia, although with strict instructions to go no farther east than Pilsen.” It is easy with the retrospective gaze of history to chide the Western Allies for alleged crimes of cowardice and political expediency for what happened next.

In the ensuing days, as the Soviet forces advanced across Czechoslovakia, the Allied forces could not advance to aid the Czech partisans. The fanatical Nazi remnant, including crack SS units, fought against the partisans with a ruthless brutality. It was a situation where neither side took prisoners.

But during this time the international political ramifications involved a delicate dance to recognize spheres of influence. The Allies aiding the Czech partisans would have violated the Soviet sphere of influence. The Dönitz regime worked with fevered diligence to fray the alliance between the British and Americans and the Soviets.

The Third Reich eventually did capitulate to an unconditional surrender on May 9, 1945. But this did not mean fighting ended, at least not on the Eastern Front. Post-surrender conflict occurred in Slivice in Czechoslovakia on May 11 and in the Battle of Poljana in Yugoslavia on May 13. The Dutch island of Texel played an unlikely role of Allied cooperation as Supreme Commander Eisenhower allowed Soviet forces to quash the German forces on this isolated Dutch island. The Nazis, keen on playing the allies against each other, lost this risky gambit. On May 23, the arrest of the Dönitz regime at Flensberg spelled the end of the Nazi government.

After Hitler is a chronicle of the Nazi endgame and the drawn-out end of hostilities. It also becomes a prehistory of the modern Cold War. It was only after Japan surrendered and the Soviets became aware of the nuclear bomb that the Cold War became an international reality. This new weapon tipped the tables and created an unequal relationship between the Soviets and Americans.

Despite the linear nature of the narrative, Jones goes back and forth in time throughout the book. This works most of the time, although there are passages where the chronology becomes muddled. But he excels at relating epic historical events with individual reactions. These range from British, American, French, and Soviet recollections and span class, rank, and background.

After Hitler is a brilliant exploration of the final days of the European theater, valuable in its military analysis and generous use of eyewitness accounts.