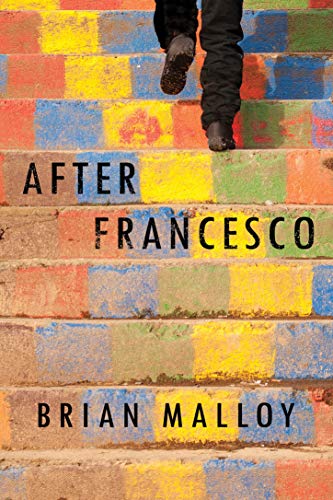 In the summer of 1981 came the New York Times’ article about “Forty-one homosexuals turning up in emergency rooms with a spectrum of mysterious and lethal symptoms.” Forty years later there is still no complete cure for HIV/AIDS, but it is not the death sentence it was in the first decade and a half that it raged around the world.

As the 40-year observance of the first reports, it is time to remember those who were lost, what the government didn’t do, and how the LGBTQIA+ communities around the country took care of their own in the face of rabid homophobia.

Writer Brian Malloy was an AIDS activist and founder of the Minnesota Gay and Lesbian Funding Partnership in the ’90s. The author conjures the fear, uncertainty, courage, and the solidarity of a community in his novel commemorative novel After Francesco.

Malloy’s opens the book with his chapter 1988: The End of the World that unfolds at the funeral of Eddie, where the deceased’s lover, also named Eddie, has been kept at the back of the church during his funeral service at the insistence of his biological family, who want to erase the dignity of their son’s truth as a gay man.

Overcome with emotion Eddie’s lover starts screaming “My place is here! With him.” His gay friends and straight allies are relegated to back pews, but rush to help him, and a brawl breaks out on the altar. And they are instantly surrounded by church bouncers and shoved out.

This scene encapsulates all the volcanic emotions of a gay man’s chosen family being erased by his legal family that played out in similar various ways across the country during the ’80s. And in some parts of America, it still does.

It is all described by 28-year-old Kevin Doyle, who is himself in the throes of grief and still devastated and adrift over the death of his lover Francesco who died of AIDS two years before. He is haunted by memories of his time with Francesco and unable to cope with anything else, his job, his plans, his friends, or his city.

Kevin remains lost to himself, self-medicating on booze and drugs to try to escape his crushing grief. His friends become so concerned that they talk him into returning to Minneapolis where he grew up to detox with his loving, understanding family confidante Aunt Bye, who does everything she can to support him, if he agrees to rehab and to join her volunteering at an LGBTQIA+ social service organization.

After building his life in Manhattan the last thing Kevin wants to do is return, defeated, to the environment that he fled as a young gay man. He and his aunt are closer than ever and his best friend, who is straight, is all in on helping him recover from alcohol abuse and grief. There are complex relationship issues to sort through that are steeped in the past.

The oppressive atmosphere of his past helps his breakthrough with the rekindling of old friendships and relatives that he thought had changed since he came out. At the nudging from his aunt, he gets involved with a LGBTQIA+ community center, agrees to counseling, and ends up volunteering his time, eventually pulling his life together enough to return to New York.

With wit, compassion and vivid atmospherics of the era, Malloy has written an inspiring story of a defining era of loss, but one that galvanized LGBTQIA+ Americans for forge a new era of visibility and solidarity.

All the issues of this era a powerfully conveyed in Malloy’s fictional narrative in his elegiac remembrance of a shared tragic past. But it is also filled with humor and the pathos of raw emotion of Kevin’s unfiltered grief.

This novel has a place on the shelf with such defining titles by LGBTQIA+ authors during the devastating 15 years of the AIDS pandemic before life-saving drug combinations were available, many by authors who chronicled their own life trying to survive, or the lives of friends, family members and lovers.

After Francesco is a potent reminder that we can never forget the generation we lost. And we can never stop fighting for our lives against all odds. The anti-LGBTQIA+ hate that spiked during the AIDS years is a fever that is once again as twisted new LGBTQIA+ discrimination bills are being pushed through state legislatures, the halls of congress, and the courts across the land.