After the Fall: Being American in the World We've Made 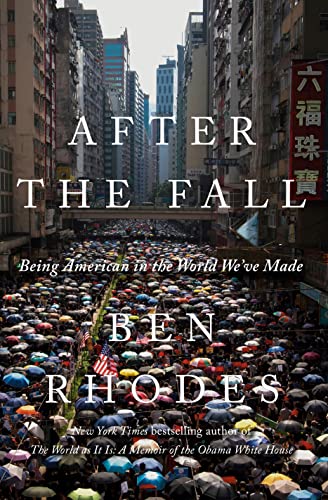 Here is vital reading for Americans and people anywhere who seek to understand what is happening “after the fall” of the global system created by the United States and shaped increasingly by China under Xi Jinping.

The book’s analyses of recent events and apparent trends are based on facts, as the author finds them, presented in an offhand, nearly conversational manner. Other experts may disagree with the interpretations of Ben Rhodes but must take account of the realities he describes. A trimmed-down version of After the Fall could serve as an eye-opening supplementary text for AP, college, or adult ed courses on world affairs.

Sketching the world as he finds it, Rhodes asks if  the United States can recover from the damage done to its fiber and to its image by Donald Trump and Trumpism. To answer these questions, the author—a close collaborator with Barack Obama during and after his presidency—traveled to hot spots around the world for four years, starting in Myanmar, where he met several times with Aung San Suu Kyi.

What underlies the author’s driving and intelligent curiosity? Rhodes was deeply impressed by the ideas expressed by then Senator Obama when he addressed the Democratic National Convention in 2004 and, just a few weeks later, by Russian President Vladimir Putin after his security forces wiped out Chechens occupying a school in Beslan, Russia, killing nearly 200 children in the process.

While Obama spoke of the as yet unfulfilled promise of democracy, Russia’s president warned of a world in which the weak are trampled by the strong. The Kremlin boss promised to make Russia strong again. Rhodes kept copies of both speeches in a file that he occasionally opened and pondered before joining the Obama campaign team in 2008. Increasingly tempered by direct involvement in Washington politics, the author’s youthful idealism became more pragmatic.

The Obama presidency was succeeded by what Rhodes calls the Trumpian “experiment with fascism, albeit of a particularly incompetent and corrupt kind.” Rhodes concludes that “a new model of nationalist authoritarian politics is a defining reality of our world today.” Looking back at least three decades, he laments that “this is the world we made.” Americans did so by accepting that “It’s the economy, stupid”—the slogan pronounced by James Carville, strategist for Bill Clinton as he ran against George H. W. Bush in 1992.

At least since Ronald Reagan in the 1980s, many Americans believed and acted as though a larger gross domestic product was the goal and the vindication of American greatness. For millions of Americans and billions of other humans, however, even moderate wealth seemed unattainable. Access to the internet did not slake the frustrations of the have-nots, for it permits them to glimpse how the rich and famous wallow. For millions of people, the financial crisis of 2008 showed that capitalist economics as practiced in the United States was a failure. Millions threw out liberal politics with liberal economics.

America’s malaise became a global malaise. Rhodes illustrates this theme by his analysis of  nationalist authoritarian politics in the Hungary of Viktor Orban, the Russia of Vladimir Putin, and the China of Xi Jinping. He anchors these case studies with detailed discussions with thoughtful dissidents in each country,

Orban does not pretend to solve the problems of a corrupt and unequal economy. In a world that is corrupt and unequal, he pledges that his Hungary will at least be ruled by “true” Hungarians—white Christians hostile to all who are not. The parallels with Trumpism are obvious—its hostility to immigration, international law, and to a Black president.

Much of the Putin message is similar to Orban’s. If politics and economics are everywhere corrupt, Russians might as well have a strong, competent leader who shares his people’s grievances and desire for restored national greatness.

Trying to assesses the opposition to Putin, Rhodes meets the daughter of  Boris Nemtsov, assassinated within view of the Kremlin, and with Aleksei Navalny, subsequently poisoned and then jailed by Kremlin operatives. Their stories evoke admiration for the bravery and persistence of Putin’s opponents, but underscore the profound obstacles to modifying a network of totalitarian controls backed up by entrenched vested interests armed with modern technology.

As often happens, the United States contributed to this malaise. Some Harvard economists helped mastermind the privatization of state-owned industries in the 1990s that turned middling officials and hangers-on into influential billionaires. So long as they toe the Kremlin line, the oligarchs and Putin grow richer and more powerful.

Authoritarianism in Hungary and Russia may be fragile; in China, much less so. Xi Jinping has exploited modern technology and the open access to international markets facilitated by hopeful Americans to create a living version of  George Orwell’s 1984 dystopia. Xi wagers that most Chinese will settle for greater  material comfort even if it entails little intellectual or political freedom. Rhodes knows all this from his own meetings, often joining Obama, with Xi and other Chinese officials, and with dissidents in Hong Kong and the United States—many of them survivors of the 1989 Tiananmen massacre.

Xi deploys China’s growing wealth to intimidate, silence, or buy off critics at home and abroad. He pressures not just Google but Hollywood to bow to Beijing’s red lines. His Belt and Road Initiative wins influence from Ecuador to Sri Lanka to Hungary by offering infrastructure projects financed (usually as loans) by China and carried out by Chinese firms and workers. Some beneficiaries are now looking this ostensible gift horse  in the mouth. Time will tell whether Xi’s Initiative backfires or helps China displace the United States as Number One.

The final chapters of After the Fall discuss “Who We Are: Being American.” The focus on Obama in the 2020 election campaign revealed just how racist the Republican Party has become. President Obama extended olive branches to the GOP but could not overcome the barrier of his skin color. Obama’s policies had been more moderate than wanted by progressive Democrats. Critics said he should have done more to woo West Virginia, but its white working-class voters had not voted Democratic for decades. Having picked up speed after the Cold War, the Republican Party’s radicalization accelerated during the Obama presidency so that it found common cause with the likes of Viktor Orban and Vladimir Putin.

The Soviet imperial challenge empire gone, Americans need to address the new Cold War that has erupted within the United States—a battle between people who live in the real world and those who choose “to live in a false reality made up of base white supremacist grievances and irrational conspiracy theories and seeking to impose it on the rest of us.”

Consequences of the macro trends depicted by Rhodes hit home in 2020 after the murder of George Floyd. By then the Rhodes family lived in Venice, California, and he was teaching at the University of Southern California. People were painting murals to recall other Blacks killed by  police. The National Guard was deployed. Helicopters circled over Venice. The three- and five-year old  daughters of Rhodes asked him, “Why are there soldiers? Why do they have guns?” Rhodes tried to calm their fears but could do little more than recall the work of Martin Luther King, Jr.  Rhodes remembered also how Jackie Robinson, having suffered much verbal and physical abuse, dared to steal home in the 1955 World Series. “What an American thing to do,” Rhodes reflected, a “brazen belief that propels the underdog‘s dash toward home.” Here was a symbol of a future not yet foreclosed by the GOP and its base.