After Evangelicalism: The Path to a New Christianity 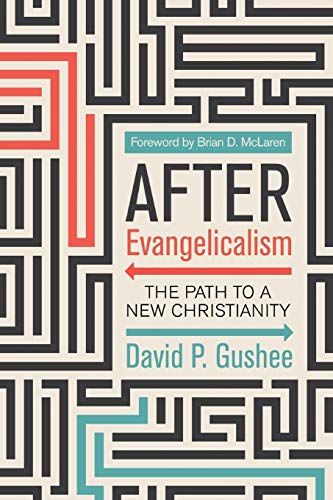 As November approaches, national Democratic strategists are focusing on an unlikely path to the White House: winning the small but prophetic minority of anti-racist, humanitarian, white evangelicals.

David Gushee addresses these Christians in his slender but insightful new book, After Evangelicalism. The Distinguished Professor of Christian Ethics at Mercer University is himself leading the way, joining Vote Common Good, a group of anti-Trump evangelicals and other religious leaders.

Trump is “a corrupt man and a corrupting one," he writes. "[His] presidency represents a low moment indeed.”

In an op-ed column for Religion News Service, Gushee updated his views on the cynical marriage of convenience conservative evangelicals have made with Trump and the Republicans, and where it has taken them.

“Both appear more concerned with power than with principles. Both hide their private sins behind a veneer of wealth and reactionary claims of Christianity’s persecution. Both took proud old movements in America and visibly advanced their moral deterioration.”

Winning over a small minority of like-minded evangelicals for the Biden-Harris ticket might not be that much of a stretch.

While there are fundamental differences with this year’s Democratic platform on issues like abortion and marriage equality (and thus the latest Supreme Court vacancy), moderate evangelicals share many of the concerns of other progressives: climate change, the homeless, human trafficking, prison reform, economic inequality, even common sense gun control. Plus, they are increasingly repulsed by Donald Trump, both his personal and public life.

In After Evangelicalism, Gushee outlines why he no longer considers himself an evangelical. The reasons, which are both theological and political, are embodied by the subtitle of his previous memoir: Following Jesus out of American Evangelicalism.

Like other U.S. and European faiths and denominations, white evangelicals are losing members, especially young people, and with good reason.

Gushee says he has seen increasing numbers of these evangelicals who have left the fold, heartbroken, angry, and alienated. Their faith has crashed on the rocks of racism, misogyny, homophobia, biblical literalism (“inerrancy”), and political partisanship.

Gushee is especially concerned with those leaving the evangelical fold who have joined the category pollsters call “the nones.” That is, people with no church affiliation, also known as “church leavers.”

These are different from those merely switching congregations, the traditional “church hoppers,” and thus are considered as having abandoned their former faith communities.

This cohort, Gushee writes, is expressing “conscientious objection” to their parents’ religion, as it has become.

“I feel called to help shepherd the lost sheep of post-evangelicals, especially the most recent exiles. . . . As a pastor, I want to encourage post-evangelicals not to give up on church. But I know the hurts are many, the obstacles grave.”

Gushee, who prefers the term “post-evangelical” to “ex-evangelical,” posits what he calls “Christian humanism” as an alternative to “inhumanity in the name of Christ.”

Recent political developments have led many evangelicals like him to question the faith they inherited, Gushee writes.

Racism is American evangelicalism’s historical heresy and original sin, Gushee says, beginning with its unquestioning defense of slavery, through Jim Crow, segregation and, most recently, their blindness to Trump’s blatant racism.

Likewise, homophobia “is inhumanity in the name of Christ,” he writes. “Full acceptance of LGBTQ people is a non-negotiable dimension of post-evangelical Christianity.”

“The LGBTQ issue has helped clarify that there is no real difference in theological method between fundamentalism and evangelicalism,” writes Gushee, who himself changed his mind on this issue.

“I need to state very clearly that I oppose every aspect of this version of evangelical Christianity,” Gushee writes, “if being Christian means rejecting LGBTQ persons and supporting systemic racism.”

The roots of the political path to becoming a wholly owned subsidiary of the GOP dates to the late 1970s when what Gushee calls “identity fusion” made “white evangelicals” and “Republican” synonymous.

This journey culminated in the 2016 election, when this cohort took “a disastrous turn” in endorsing Trump. “With Trumpism, American evangelical politics reached its nadir.”

Theologically, Gushee argues that late 20th century evangelicals were essentially rebranded fundamentalists, from the early 20th century, wanting to avoid their hidebound image. Today, the author says, the two are one and the same. Or, as one observer dubbed it, contemporary evangelicalism is simply “fundamentalism with good manners.”

What they are learning is “a particularly damaged version of Christianity” that “has prevailed over Jesus’ own teaching and way.”

For those like him, who are still questioning, Gushee, a former president of the American Academy of Religion (AAR), provides a spiritual road map for where to go next.

“The goal of this book is to offer clues for getting out of some of the most difficult spots in the evangelical maze,” he writes, “in order to come out on the other side—not just alive and intact, but still interested in a relationship with Jesus.”

In order to do that, “post-evangelical politics will have to set aside most of what white US evangelicals have been doing.”

For the most part, Gushee writes in deft, graceful, accessible, and sometimes clever prose. Mercifully, at least for the most part, he stays out of the theological weeds, and avoids evangelical “inside baseball.”

Sometimes, however, he drifts into the didactic, university professor mode: first saying what the chapter will say, saying it, and then summarizing what was said (“Takeaways”).

Inevitably, After Evangelicalism covers some of the same territory as other books published this fall by Robert Jones, Jr., Sarah Posner, Kristin Kobes Du Mez, and Frances Fitzgerald. The latter two are cited in footnotes, among a slew of others.

But unlike these other authors, Gushee is a Christian ethicist, and writes from that perspective, which gives his book its power and authority.

Gushee’s spiritual trajectory resembles that Jones recounts in White Too Long: The Legacy of White Supremacy in American Christianity. Like Jones, Gushee attended a Southern Baptist theological seminary, but then—like him—whip-sawed, in Gushee’s case through a Ph.D. at the liberal Union Theological Seminary. There, he wrote his dissertation on Christians who rescued Jews during the Holocaust.

After Evangelicalism could very likely attract significant attention. There are many well-educated, fair-minded, and service-oriented white evangelicals who lack the shortsightedness, insensitivity, and intellectual shallowness Gushee decries. So his critique of their more flawed faith-compatriots rings sadly true. Perhaps his book will be a wake-up call for both.