After 9/11: One Girl’s Journey through Darkness to a New Beginning 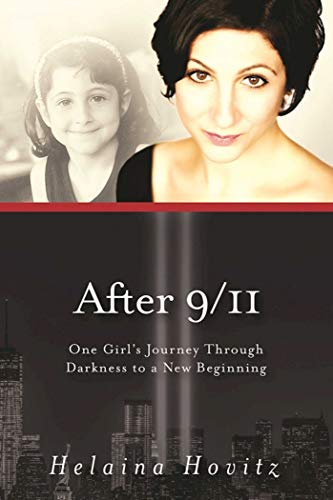 “Hovitz had the grit, determination and resources to pull herself out of the morass of PTSD. What about the rest of her generation growing up in this post-September 11 world?”

Author Helaina Hovitz in her book After 9/11: One Girl’s Journey Through Darkness to a New Beginning provides us with a timely account of the seen and unseen damage searing experiences and memories shape.

In the book Hovitz shares her memories of that dread filled morning on September 11, 2001, when a neighbor, Ann, collected her children and then 12-year old Hovitz from their middle school as it was evacuated.

“’Don’t look up, don’t look back, just keep going!’’ Hovitz writes: “I was tiny so I had to fight my way through walls of people. . . . Before it was fun. An adventure. Now, it suddenly felt like I couldn’t breathe, and maybe I couldn’t. In fact, I felt like I was going to faint. . . . ‘Oh my God, they’re jumping!’ Ann said . . . I kept hearing more sounds. Some reminded me of the crashing and grinding of garbage trucks, others of a heavy box suddenly dropped on the ground, others, still, hail hitting a window, only heavier, like a giant bag full of nails, creaking, slamming, booming.”

How does anyone survive psychologically intact from such horror experienced at the onset of adolescence—or at any age? But millions of New Yorkers have had to cope with PTSD to a greater or lesser degree after September 11 and so have many hundreds of millions of Americans, and indeed people from around the globe. Our world changed that day, and we are still dealing with the seismic aftershocks.

Helaina Hovitz, in understated prose, takes us with her on her path away from PTSD. She does not shy away from nor minimize the effects of her trauma. Years of therapy and counseling, growth into adulthood with not so deeply buried horrific memories that threaten to overcome her at any moment, panic attacks, her descent into sexual acting out, and alcoholism are all vividly laid out for us.

For Helaina, a university graduate, the path ends more or less happily at “This.”  “’This’ would be finalizing a book. ‘This’ would be attempting, with no prior business whatsoever to start-up a news service exclusively focused on inspiring and hopeful stories about people who are trying to make the future better.’ ‘This’ was dealing with chronic pain, for almost a ten years by then, trying tons of doctors and medications and therapies and getting nowhere.’ ‘This’ was doing it all stone-cold sober.’”

Hovitz had the grit, determination and resources to pull herself out of the morass of PTSD. What about the rest of her generation growing up in this post-September 11 world? How many of them have a shot at new beginnings akin to Helaina’s?

Recently on August 17, 2016, we were reminded of the devastating effects of such trauma when we saw the infinitely tragic image of Omran Daqneesh, the Syrian boy sitting in an ambulance seat in Aleppo, his hair, face and body covered in ash and blood. Since 9/11 so many hundreds of thousands of children have suffered death or grievous physical and psychological trauma in the Middle East and other conflicts. We read and see their stories daily in the media.

Throughout history witness-bearers through their stories provide personal glimpses into historic events that can otherwise become dates and place names and statistics. Hovitz’s book opens a window on one person’s journey in the aftermath of September 11. She has rendered a valuable service in adding her voice to the memory of this momentous interstice in world history.