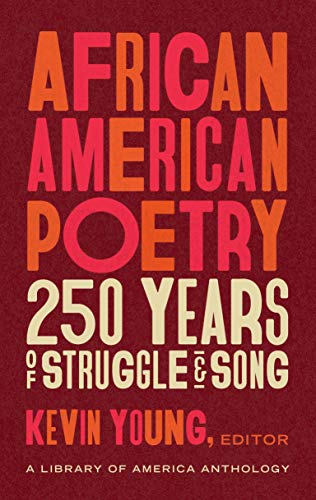 “On Imagination” is the opening poem in Library of American’s African American Poetry: 250 Years of Struggle and Song. It was written by Phillis Wheatley in the mid-17th century. Wheatley was captured by slave traders at age seven in Senegambia, Africa, and sold on the auction block to John Wheatley, a Boston tailor, who cruelly named after the slave ship Phillis. But after she learned English, Phillis was so fearless a poet she eventually published volume of verse Poems on Various Subjects in England, writing in classic poetic form, but imbued with themes of racial injustice.

“Winter austere forbids me to aspire, . . . Cease then, my song, cease the unequal lay.”

In his introduction, Young writes that the volume “seeks to amend and expand the record. Following in the tradition of previous Black anthologists.” It’s the comprehensive scope of the Black literary diaspora, including famous and obscure poets that Young writes are “robustly represented here. Among them, many women writers and LGBTQ voices, “sometimes ignored, and for a Renaissance that stretches from Paris to Philadelphia, from D.C. to the American South and the Caribbean.”

Young also includes many of the most famous works from the storied Harlem Renaissance era, including the full version of Langston Hughes’ “Montage of a Dream Deferred.” But, vitally, the collection also showcases many of the lesser-known poets or the era.

The panoramic range of poetic forms from classical to free verse, in Young’s commentary, sums up “poetry about beauty and injustice, music and muses, Africa and America . . . what they saw around them and also what they dreamt up—even if it was a dream deferred, derailed, or flat out denied. In sonnets and anthems, odes and epics.”

Consider the powerful words of little known Philadelphia poet Mae V. Cowdery in “Goal.” “My words shall drip like molten lava” and the ending words “The lava from the black volcano/Shall the words, the ashes, thoughts of all men.”

Those powerful voices representing today’s leading writers like Aja Monetz, whose stirring “#sayhername” invokes the names of black women, including Breonna Taylor, Sandra Bland, and so many others in recent years who have lost their lives in encounters with the police.

In an era in which leaders want to rewrite history textbooks to erase the history of oppression and violence against people of color, the truth of that history lives in these pages in epic poems like Robert Hayden’s poem “Frederick Douglass/Middle Passage.” Hayden is a fearless witness to history about the reality of the Amistad passage and it is written with breathtaking poetic craft and artistry.

Young notes, “The anthology includes poems in poets of African descent writing in languages other than English, among them free Creoles of color from Louisiana who published Les Cenelles: Chos de Poesies Indigenes in 1845—marking the first anthology of African American poetry published in the U.S.” Later, Langston Hughes recognized their significance and translated many of the poems from French to English—creole poems composed in French, odes, satirical songs, and romantic verse—most of which have been out print until now.

A century later Gwendolyn Brooks’ voice was so resonant in artistic form and narrative content that her poems appeared in the Chicago Defender newspaper when she was 16. In 1950 Brooks published Annie Allen and became the first Black poet to win the Pulitzer Prize and garnered every literary prize and national accolade including the National Medal of the Arts. Brooks influenced generations of Black poets.

Brooks is well represented in this volume and many of her poems are almost prophecies the Black Lives Matter movement. In her poem “The Second Sermon on the Warpland” refers to a place where “All about are the stormers and scramblers’ with the message of her community with to unite. This is the urgency: Live! and have your blooming in the noise of the whirlwind.”

The fusion of music and poetry, in all of their diasporic art forms, are chronicled in this volume—from traditional spirituals born as a message of spiritual freedom and to the musical universe of jazz. Many of the poets write homage to jazz legends, about Billie Holiday, Bessie Smith, John Coltrane, Louis Armstrong, Charlie Parker, Miles Davis, and the musical revolution they created.

The populism of poet-musicians in the ’60s and ’70s, such as Gil-Scott Heron’s in his searing j’accuse “The Revolution Will Not Be Televised” that confront racial injustice and government corruption in the wake of the Vietnam War, and police violence against Black America.

Poets embracing classical forms, prose poems, experimental, jazz verse, fusions of craft, music, rap, poetry slams are the poets of today who harken back to the traditions of African American oral storytelling, language that triumphed over the tactics of pervasive racism. This is an essential volume for all poetry lovers and in its scope rescues essential writing in the pantheon of American literature.