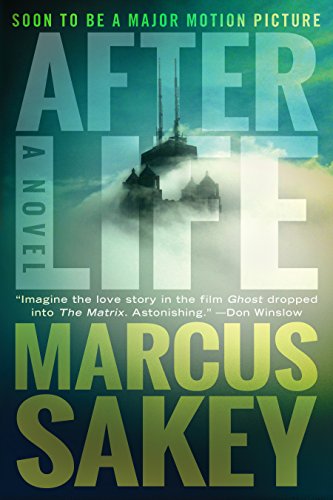 “a police procedural with a supernatural story of a love overcoming the bonds of death.”

When he isn’t having a secret affair with his FBI superior, Claire McCoy, Agent Will Brody is hunting a killer, a sniper who so far has randomly killed eighteen people. As much as he hates for his work to keep him from Claire, Will is determined to stop the slaughter.

What he doesn’t know is that the sniper is waiting for him.

Alerted by an anonymous phone call, they come together in an abandoned church.

“The church was filled with parti-colored light, like a rainbow sun had been born in the center. For a fraction of a second, Brody stared into a blast of furious illumination blooming beneath the stained glass, and the shock wave hit and he was flying, swept up in a blast of heat and a thousand shimmering razors.”

When Brody awakens, he has quite a few questions.

“‘You’re dead,’ Kyle said. ‘Welcome to the Afterlife.”
‘Is this Purgatory?’
‘No, it’s Chicago. Look, I’m not trying to be unhelpful, but we all got here the same way you did. We died, we woke up. If God is involved, he hasn’t introduced himself.’”

They exist in the same time as the real world but on a different plane. What happens in the same place in their world is immediately erased and restored the moment they move to another location.

“The worlds are not a row. They’re in layers. And life and death are stacked upon one another.”

There are two types of inhabitants in this world, the Eaters and the Good Guys, including the sniper’s victims. Eaters kill everyone else, absorbing their essence as well as their memories, thus becoming stronger, more vicious, and deadly.

As Brody struggles to accept what’s happened, Claire continues working the case. In an ironic twist, she confronts Simon Tucks, the man who killed eighteen people, including her beloved Will.

“Claire put three bullets in his chest in half a second. His body slumped. His hands fell.  The detonator hit and everything vanished in a flare of white.”

Claire is united with Brody in death. For a short time, everything is idyllic in spite of their surroundings. They may be dead, but they’re together and still in love.

Then Simon Tucks arrives in the Afterlife, with a plan to destroy everyone, absorb their essences, and become as powerful as possible.

To destroy Tucks, they must stop the entity possessing him. With the aid of another immortal creation, they learn his identity—Edmund, a boy who died over 500 years before but overcame death to become a creature of enormous strength, with an appetite for gaining more power with each death he causes.

Time isn’t on their side, however, for Claire and Brody are both approaching the end of their existence in the Afterlife.

Do they have time enough to remove Edmund from the Afterlife and rid the world of the living of his presence before they also enter the abyss, losing each other and going on to another life or to an equally possible cessation of existence?

Will’s declaration to Claire says it all: “‘I was alive and it was so sweet, but I’d rather be dead and with you.’”

Mixing a police procedural with a supernatural story of a love overcoming the bonds of death is no mean feat. Author Sakey manages it, however, in a way that justice is served in no uncertain terms, both in this world and the next. With a narrative that on occasion become near poetical in its description, it pours forth the message that some forces are stronger than death, and love and the will to survive are two of them.

Some may question the ending, declaring it inaccurate because it occurs only ten years later, but the last chapter’s message is there to offer an affirmation no how the reader interprets the conclusion.