Adrift: How Our World Lost Its Way 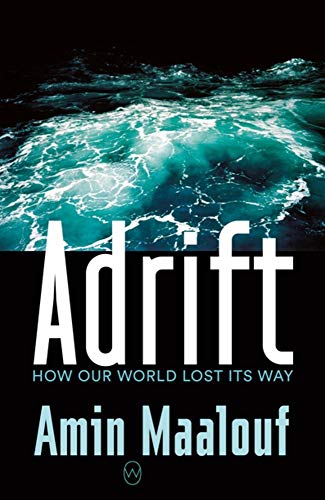 “In Adrift Maalouf looks back at the disastrous course that world history has taken over the past 75 or so years that has jolted humanity in all four corners of the globe and everywhere in between . . .”

This book will likely hold the attention of readers, though it will probably not entertain, especially those who enjoy romance, explosions, car chases, foot races, and happy endings. Amin Maalouf isn’t a part of the entertainment industry. In Adrift Maalouf looks back at the disastrous course that world history has taken over the past 75 or so years that has jolted humanity in all four corners of the globe and everywhere in between, save for Antarctica.

Maalouf doesn’t seem to have a methodology or a format. If he does they’re not apparent.

What he does, and does exceedingly well is to pinpoint a geographical place and a time in history, say the Arab-Israeli War of 1967, and then to move out from there in ever widening concentric circles. He begins in Egypt and Lebanon, two countries he knows well, takes in the whole world and explores and explains the major political, social, and economic convulsions of the past eight decades.

He’s especially fascinated by the chain of events that began, roughly, with the rise and fall of Nasser, the international struggle over the Suez Canal, the oil crisis of the 1970s, the slaughter of Palestinians near Beirut and in view of the Israeli Army, the birth and death of the Palestinian Liberation Organization, the Israeli annexation of the Left Bank, the Islamic Revolution and Khomeini, the Russian invasion of Afghanistan, the triumph of Thatcherism and Reaganism that fed off one another, and big data and AI.

It’s a wild ride that moves from country to country, continent to continent and that includes everything from identity politics, to the breakup of the Soviet Union, and the wars between Sunni and Shina Muslims.

As a journalist and as a citizen of the world who has traveled widely, Maalouf has had the opportunity to witness pivotal events and personalities first hand. He's an incisive observer and a philosopher, too.

Near the beginning of Adrift, the author apologies for using the words, “I” and “me,” and, while that’s understandable, no apology was needed. His is a very personal take on contemporary history, but it also has the ring of truth. Maalouf has strong feelings, but they don’t get in the way of his remarkable ability to see clearly and write with a critical eye.

Urging everyone to buy a book and insisting that it be required reading can backfire. Who wants to be required to read a text? Not students or life-long learners.

But Adrift is so moving written and so all-encompassing that it would behoove all intelligent humans, and those who are aiming to understand the connections between seemingly disconnected events, to get this book, read it, absorb it and reflect on the ideas the author puts forward about the collapse of civilizations, the decline of civility and the nature of empires.

Maalouf ends with a "postface" about Covid-19 and the pandemic of 2020. He wonders if the “conservative revolution” has begun to fade and concludes that it’s “too early to say.” Indeed, sometimes new is happening. Maloof knows that much. See if you don’t agree with his point of view.