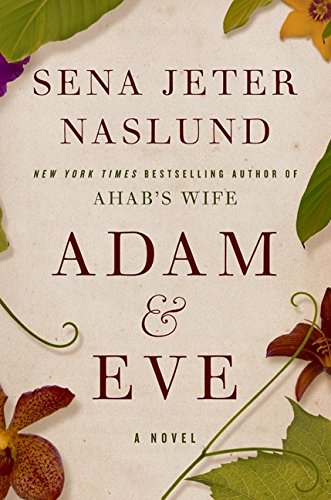 In a vastly different narrative than what readers have come to expect from bestselling author Sena Jeter Naslund, Adam & Eve takes readers on an epic journey of extraterrestrial and religious proportions.

Lucy Bergmann is a woman in love with her talented and romantic older husband, Thom. Then he is tragically killed just moments before making an announcement that would change the world as we know it. His declaration would have given proof that we are in fact not alone in the universe. Instead of sharing in this groundbreaking moment in his career as a renowned astrophysicist, Lucy is left a grieving widow with only the sacred memories of her husband and a single disk drive that Thom placed around her neck. The disk drive is one of great importance since it contains all the data on his unshared, potentially explosive discovery.

Months later, when called to the Middle East to participate in a conference in Thom’s honor, Lucy finds herself the chosen protector of a document that could repudiate all the former writings of organized religion. Entrusted with its care, Lucy is now a target for many who want not only this codex, but also the information she has carried around her neck for months. Undertaking a journey of great danger, Lucy finds herself no longer the supportive wife but the keeper of knowledge herself.

Extraterrestrials, religion, and violence in the name of God all come together in Adam & Eve. In a book unlike any other, Sena Jeter Naslund once again proves that she can master narratives of multiple styles and subjects, from futuristic to historical, science fiction to literary; Naslund is a master of contemporary fiction and a modern day treasure as an author of works of such distinction and specialization. It is difficult to think of another author whose works vary so drastically—and yet maintain such a high level of mastery in each genre.

Above all, each of Naslund’s books offers beautiful writing, an engaging and almost enchanting narrative, and a missive for readers. As to the latter, Adam & Eve successfully communicates that violence is never the answer, no matter the religion or the message. Violence only perpetuates violence and never can be absolved—even by the God in whose name it is so often undertaken. Adam & Eve is multi-layered and sometimes hard to follow, but the reader who is willing to take the time and patience it commands will not be disappointed.

Some readers and even fans of the author may find it too much for their Saturday afternoon browsing, but true fans will get lost and find themselves rereading in order to discover each gem within its pages. Research and the occasional rereading aside, this work is worth the challenge. While the puzzle pieces may be hard to put together at times, they do fit, and the overall picture leaves a reader feeling a deep sense of satisfaction and enlightenment.

Adam & Eve is a commanding text that will educate and enthrall. It is not to be taken on lightly, as it does require a certain level of reader interaction and thoughtfulness to genuinely appreciate Naslund’s accomplishment.