Activists Under Surveillance: The FBI Files (The MIT Press) 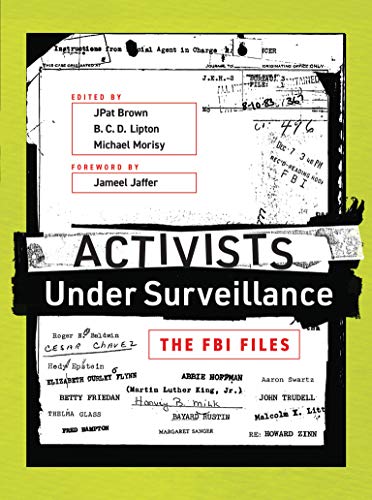 “This work by Brown, Lipton, and Morisy reminds us that the powerful institutions of the federal government are only as good as the men and women who lead them.”

The Federal Bureau of Investigation is going through a particularly challenging time in its more than 110 years as the federal police agency. As the law enforcement office with primary responsibility for matters of intelligence and security, the FBI has had a checkered history. Activists Under Surveillance: The FBI Files, edited by JPat Brown, B. C. D. Lipton and Michael Morisy, is one of three collections of Bureau documents by MuckRock, a progressive website, that demonstrate the FBI’s perfidy.

Under the guidance of Director J. Edgar Hoover, the Bureau became the nation’s secret police. Based on the Director’s whim and caprice, Hoover personally selected targets for investigation. Hoover suspected without evidence that all political activists were communists. Reports filed by his agents are collected here with short introductions by the editors.

The list of activists selected for this volume are, for the most part, well known public figures. Dr. Martin Luther King was the most eminent of Hoover’s targets. Hoover thought Dr. King was influenced by directives from Moscow, although there was never any support for the claim. Hoover’s goal was to disparage the entire Civil Rights Movement. He seemed particularly obsessed with King, but he failed to discredit King’s enlightened voice.

Hoover offered off-the-record dirt on King and his alleged “degenerate sexual urges,” the Director’s favorite epithet hurled privately toward the Civil Rights icon. (Perhaps Hoover was deflecting his worry about his own crossdressing fetish.)

The document collection also includes file records on Betty Friedan, Abbie Hoffman, Harvey Milk, Bayard Rustin, and Malcolm X, among others. There are no surprises, but when considered as a whole, the papers are chilling. Activists of the 1960s were certain that the Bureau was spying on them. The release of this compilation and others like it confirms their concerns and apprehensions. Yet the files are mostly boring bureaucratic documents. For the most part, the Bureau was not incompetent; it was simply misguided.

Today, the FBI has gained prominence as the nemesis of President Donald Trump. The rule of law can be a troublesome impediment to those leaders who prefer the arbitrary exercise of power. Progressives have elevated the Bureau as the symbol of enlightened resistance. In fact, the Bureau can accomplish much that is good or bad depending on the preferences of its leadership. This work by Brown, Lipton, and Morisy reminds us that the powerful institutions of the federal government are only as good as the men and women who lead them.