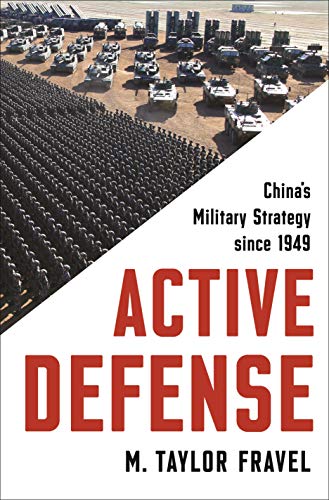 “Trying to divine and react to an assertive China’s intentions and capabilities will be the critical national security challenge for the U.S. this century. . . . Highly recommended.”

What does China want? More importantly for the United States and our Pacific allies, what is China capable and willing to do militarily to achieve its foreign policy goals for the next 20–30 years? Trying to divine and react to an assertive China’s intentions and capabilities will be the critical national security challenge for the U.S. this century.

In this deep and insightful book Professor M. Taylor Fravel examines the last 70 years of China’s evolving military strategy and strategic thought using an analytic method that provides some fascinating assertions and conclusions.

When discussing military strategy, particularly the realm of grand strategy and politics, understanding the lexicon being studied is critical. This is doubly true when translating many Chinese terms into their English equivalents, and the author begins with an excellent background and introduction of Chinese terminology to outline his assumptions, methodology, and terminology. This is a book for serious national security professionals or graduate students and the author assumes the reader has some background in strategy, political theory, military history, and basic military terminology.

Once the stage has been carefully set, the author unfolds his theory of the four key dates when China made significant and permanent changes to its military strategy. These changes devolved from national security policy and concepts of how China would fight its next war to filter down and shape military force structure, weaponry, training, and deployment of operational units.

Critical to understanding his key dates (1956, 1964, 1980, 1993) and their impacts on the Chinese People’s Liberation Army (PLA) is the subordination of China’s military to the Chinese Communist Party. As the author describes, the PLA is not China’s national military, it is the Party’s army and this unbreakable bond between the political and military leadership has a profound effect on the timing and scope of major changes to China’s military strategy.

In particular, this linkage had a deleterious effect on the formation of effective strategy during Mao’s Great Leap Forward and the subsequent Cultural Revolution. The author makes a particularly cogent case that Chinese strategic thought basically stagnated during these events, and the 1964 change to strategy was driven not by military considerations, but Mao’s paranoia over “revisionism” and “counter-revolutionary” thought. Mao’s politically driven 1964 changes not only stagnated military planning, but also degraded the combat readiness of the PLA overall as troops became involved in internal security, industrial and agricultural projects, and more deeply involved in Party politics.

After Mao’s death and the end of the succession turmoil with the Gang of Four, China’s new leader, Deng Xiaoping, began the first modern examination and update of the PLA in almost 25 years. The rise of the Soviet Union as an adversary, the development of weapon and sensor technologies, and the lessons of the 1973 Arab-Israeli War were all major influences in China’s new 1980 strategy. The author weaves deftly through all of the factors, especially the crucial resolution of Party factionalism and the return to military professionalism to show how this 1980 strategy laid the cornerstone for the 21st century PLA.

The strategy changes in 1993 and beyond have been the most profound as the PLA has continued to grapple with the continued development of high-tech weaponry, creating the need for a military that can be fast and lethal across a much larger battlespace. The new Chinese concept of the “informatization” of warfare has been the significant driver of doctrine, training, and weaponry for the last 30 years, particularly as the Chinese have observed Western military dominance in the Persian Gulf War, Kosovo Campaign, and the conflicts in Iraq and Afghanistan.

Beyond technology, the latest PLA strategies have also moved beyond China’s traditional emphasis on land forces to give a bigger role to joint operations with an increasingly capably Chinese Air Force and Navy.

The author concludes with an excellent summary of China’s likely future military strategies and missions. As China no longer fears a ground invasion, the military’s focus has shifted to preparations to further China’s goals of regional hegemony, especially concerning Taiwan and the East and South China Seas. China’s economic growth also drives much of the evolving military planning, as the desire to be a global power pushes China’s military into defending far-flung economic interests in the Middle East and Africa.

This is truly a much needed volume for China watchers or any student of international affairs studying how both internal and external influencers can drive a country’s military strategy over time. Well written and comprehensive, it is highly recommended.