Across the Rhine: January–May 1945 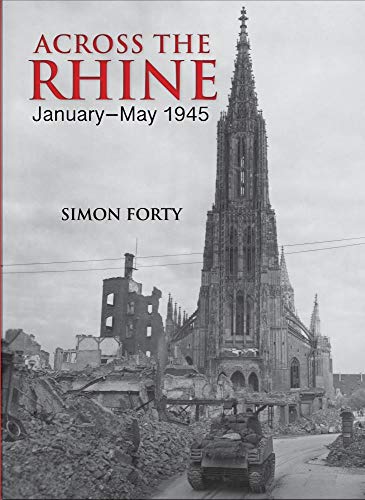 “The authors have done a magnificent job of blending a visual and narrative record and their generous use of maps and diagrams is to be commended.”

This volume, the capstone in Casemate’s Battlefield series of European Theater volumes, covers the last five months of the war in Europe using the inventive format of contrasting wartime pictures with current photos of locations and monuments of the key battlefields of the last days of the Third Reich.

Even as the Allies turned back the final German offensives into the Ardennes and Vosges regions, there was still a considerable amount of hard fighting before the Germans surrendered. Providing a lavishly illustrated overview narrative punctuated with numerous detailed maps, the volume provides a quick and easy to read digest of this often forgotten period of the war in Europe.

The reader is quickly drawn in as the authors chronicle that even though the outcome of the war was never really in doubt by early 1945, there was still a great deal of fight left in the Germany Army as they struggled to defend their homeland against both the western and eastern invaders. Determined to compel Germany’s unconditional surrender, it became clear to the Allies that even though their cause was clearly hopeless, Hitler and the Nazi leadership were determined to fight to the last.

After briefly summarizing the actions from the previous volume, the text moves quickly to the Allies first tentative offensives into Germany proper, with heavy fighting to clear the west bank of the Rhine River. Moving across the entire western front and covering all of the Allied armies and their German opponents, the authors show the wide range of operations undertaken by the Allies as they begin their final offensive into Germany, encountering large number of German civilians for the first time as additional cities are occupied by British and American forces.

Once the Allies reach the Rhine, Germany’s last natural defensive barrier, they use a variety of methods to cross the river, including airborne drops, river assaults using landing craft, or building tactical bridges under fire as the Germans destroy all the existing bridges over the Rhine save the bridge at Remagen. This bridge is captured intact, providing the first foothold across the river, and as the Allies force crossings at additional locations, the final attack deep into Germany commences.

Quickly encircling and capturing the last great German Army in the west in the Ruhr Pocket, the Allies quickly race east to meet Soviet forces at the Elbe River and other chosen meeting places. Germany’s military finally crumbles, with thousands of German troops seeking to surrender to the Western Allies to escape Soviet vengeance. After the final unconditional surrender of German forces occurs, the Allies being the long process of demobilizing German prisoners and beginning to restore a semblance of governance over the newly occupied zones of Germany.

The authors have done a magnificent job of blending a visual and narrative record and their generous use of maps and diagrams is to be commended. The entire series provides a unique perspective of the liberation of Western Europe that is part traditional history mixed with a modest battlefield tour guide. The use of before and after snapshots of numerous wartime locations is fantastic for anyone looking to actually visit the many battlefield markers and memorials in place today. The narrative is engaging without going into too much detail, and an excellent bibliography is provided of the sources used in the event a reader wants to research deeper into a particular topic.