An Accidental Archaeologist: A Personal Memoir 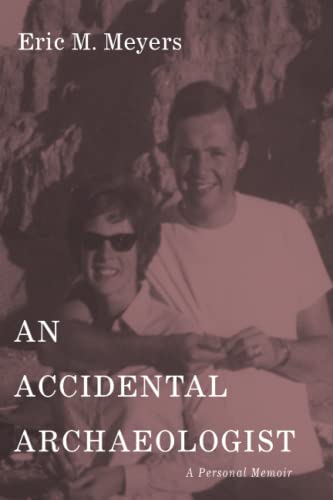 If modern American archaeologists have a patron saint, it would be Indiana Jones, who burst onto the scene with the summer 1981 blockbuster Raiders of the Lost Ark.

Star Harrison Ford, with his rugged good looks, leather jacket, battered fedora, and coiled bullwhip on his hip, made the academic discipline seem sexy, from the lecture hall to the desert.

Raiders became a cinema (and merchandizing) franchise, the centerpiece of four—soon to be five—of Steven Spielberg’s big-screen hits, as well as a television series, based on Indy’s youth.

Not since 1922, when Englishman Howard Carter discovered, violated, and looted the tomb of the Egyptian boy pharaoh Tutankhamun, and the Saturday movie serials sparked by that cursed crime, did archaeologists become figures of popular culture.

By coincidence, around the same time as Raiders release, Duke University archeologist Eric Meyers, accompanied by his wife Carol, a Duke colleague, had discovered at one of his synagogues digs in Israel, a carved, stone “pediment,” the capstone of an ancient “Torah shrine.”

A savvy Duke communications writer immediately made a connection with Raiders of the Lost Ark in a press release. The publicist urged the Meyerses to stop what they were doing and immediately see the film, which they did.

Leaving the theater, he recalls in his new memoir, An Accidental Archeologist, “We kind of knew what he was thinking, namely that some people would assume that our synagogue pediment was the ‘lost ark’ of the movie. We had no idea that in less than twenty-four hours that we would be inundated with calls from journalists all over the world.”

People magazine chose to spotlight the Meyerses, posing them as modern-day versions of Indy and his feisty, off-and-on girlfriend Marion. The magazine dressed the Meyerses like the screen couple on the steps of the university’s famed Gothic chapel.

“This iconic photo followed us around the world,” Eric Meyers writes. “It was actually lots of fun.”

Not surprisingly, the publicity supercharged the couple’s serious academic careers, stretching over 50 years.

“When one of us gives a visiting lecture somewhere the introducer or host will often begin with one of those pictures, all these years later,” he writes.

Well before the Raiders publicity, and largely without national fanfare, the couple seem to have been on digs everywhere in the Jewish State.

This began with their student days in 1964, when they worked with famed Israeli archaeologist Yigael Yadin at the mountain top fortress of Masada, where the last holdouts of the Judeans’ Great Revolt against the Roman empire were besieged by Roman Legions in 73 C.E.

Over the years and decades since, they led digs in four sites in Upper Galilee. In 1985, they led their first excavations at Sepphoris, in Lower Galilee, which is seen as Eric’s signal accomplishment, the capstone of a distinguished career.

At Sepphoris, in 1987, he uncovered a luxurious dwelling, dubbed the Dionysos Villa, with exquisite mosaics. These included one of a young woman the press called “The Mona Lisa of Galilee,” for her eyes that seem to follow viewers.

The finds there, including an early synagogue, attracted national and worldwide attention, and led to the creation of a national park. But the publicity outside academic archaeological circles never approached the Indiana Jones level.

There were periodic challenges to the Meyerses’ excavations, but not from any sinister screen villains.

As required by law, Eric Meyers always obtained permission from Israel’s Department of Antiquities to dig at ancient Jewish sites.

However, at times he and his colleagues fell afoul of some of the country’s ultra-Orthodox religious groups, known as haredim. They didn’t want some of the Jewish tombs disturbed. So the archaeologists had to dig at night and in secret.

When they didn’t dig at night, their sites were sometimes the target of nighttime vandalism by the Orthodox extremists, requiring armed Israeli volunteers to protect the excavation.

More often, Meyers clashed with the haredim over objections to the summer attire of the young, female, volunteers—often tank tops and shorts. This enabled the students to work in the blazing heat, but the haredim considered the clothing immodest.

Here, however, the haredim may have been onto something.

At an early summer dig, a number of extra-marital hookups involving male senior staff and female volunteers resulted in divorces. That convinced sponsors to allow and encourage senior staffers to bring their wives and children to future digs. Just in case.

Much later, and to Meyers’ frustration, Orthodox rabbis in Rome would torpedo an ambitious project to study Jewish sections of the Eternal City’s catacombs.

In this memoir, a slender paperback, Meyers traces the roots of his career to his family. He suggests that his choice was at least in part an example of biography as destiny.

One side of his family escaped from Germany in the 1930s, although numerous close relatives who remained, including one grandfather, were killed in the Holocaust.

With lyrical, intimate prose, Meyers recounts his upbringing in Norwich, Connecticut, where he first encountered prejudice.

“Anti-Semitism in my early years and in college made me a staunch advocate of human rights and an advocate for diversity and tolerance,” he writes in the book’s Preface.

Recently, he compared his high school encounters with harassment, to that portrayed in another of Steven Spielberg’s movies, his autobiographical movie, The Fabelmans, now in theaters.

As a boy and young man with a seemingly insatiable love of learning, Eric Meyers threw himself into various academic and cultural endeavors—languages, religion, music.

He was a top student in whatever discipline struck his fancy, from Dartmouth University to Brandeis to Harvard, where he did his Ph.D., earning only one grade that was not an A—a B. He mastered nearly a dozen languages, both ancient and modern. In his spare time, he trained as a lay cantor, a position he has held throughout his life.

As the memoir’s title suggests, Meyers more or less stumbled into biblical archaeology as his life’s work. He could have devoted his academic career to any number of disciplines, stemming from his interest in the Hebrew bible and Jewish thought.

Ultimately, he attributes his decision to a chance encounter with an archaeology enthusiast, Carol Lyons, then an undergraduate studying at Wellesley. Nine weeks later, they were married, in 1964, beginning a lifelong personal and professional partnership. They signed up for the winter dig with Yadin at Masada.

Over time, Eric Meyers came to understand the enduring appeal of biblical archaeology to students like him, thousands of whom he brought to his digs in Galilee.

He also observed the attraction for adults who were pursuing other livelihoods, like a California exterminator who took summers off to help with Meyers’ digs, as well as providing financial support when it was needed.

“That is the power of archaeology and what it can do outside the sheer academic classroom component of it,” he writes.

“Somehow most of our students saw in the soil and stones of Galilee something they could not see at home, and it had to do with the discovery of the past made real and tangible. It was so for Jews and Christians alike. The experience of working in Galilee where long ago early Judaism and Christianity took root often made a difference that was life changing. . . .

“[T]he experience of digging in the dirt together brings about a sense of discovery that is hard if not impossible to replicate on campus. What one often discovered on a dig aside from ancient coins and pottery and other artifacts was one’s own self, and the implication . . . of that is realizing one’s own individual importance has to be understood . . .

“The fellowship of diggers is unique, and I know it often changes lives. It changed mine.”

Meyers is unconcerned by the possibility that scientific evidence he uncovers may be seen to undermine faith and tradition. He is an observant Jew who celebrates all the Jewish holidays. A lay cantor for many years at a Conservative synagogue just off the Duke campus, he was a founding director of Duke’s Center for Jewish Studies.

An Accidental Archaeologist is not just for academics. Written in an engaging, personal style, it is likely to be of interest to those with only a casual interest in biblical archaeology. For would-be academics, it makes a good blueprint for anyone interested in making it a career, including its pitfalls.

There is relatively little score settling, a feature of many memoirs, in An Accidental Archaeologist. And what there is, is muted.

If there is a quibble it is a minor one. Occasionally, Meyers slips into a bit more inside academic/archaeology baseball, often about the subtle but cutthroat competition in the field, usually about funding and credit, than the general reader might prefer.

Fortunately, it is also a memoir leavened with humor, some scatological, including one anecdote about two senior archeologists driven up a tree by a wild boar.

A touching thread woven through this book is the lifelong love story between Meyers and his wife Carol, to whom the book is dedicated.

The Meyerses, both now in their early 80s, seem unnaturally robust, if not indefatigable. This, despite Eric’s serious heart problem, Lenegre Syndrome, which has been treated with a new, state of the art pacemaker.

The couple still leads small, usually sold-out tour groups to Israel, setting a brisk pace through archaeological sites and up and down narrow, cobblestone lanes of the Old City of Jerusalem.

Evenings, when most weary members of their tours return by bus or taxi to their hotel, the Meyers prefer to walk, usually hand in hand: a tall man, and a diminutive woman, strolling over the ancient cobblestones, into the darkness.