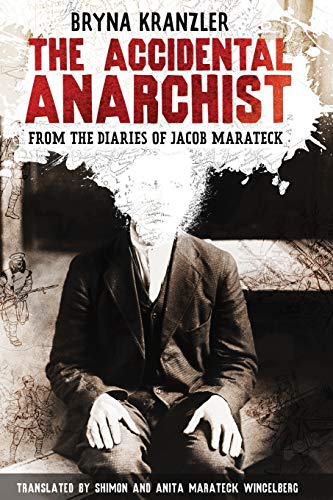 “. . . a swift, unrelenting trip down a shocking rabbit hole of incredible and frightening reality.”

The Accidental Anarchist tells the intriguing true story of the colorful Jacob Marateck, a Jew conscripted into the Russian Army during events leading up to World War I.

He becomes a leader of soldiers in the brutal Russo-Japanese War, many of whom wanted to murder him for being Jewish, yet he gains their admiration after leading them in ferocious battles.

Marateck is an extraordinary character facing certain death many times with consistent humor and steadfast faith in God. The reader certainly does not need to be an Orthodox Jew to appreciate the intense commitment Marateck has to his faith and his religious duty. His notes reveal a breathtaking ability to absorb the absurd that life dishes out to a lowly Jew in the Czar’s anti-Semitic army with aplomb and grace.

Despite being subjected to court martial several times, Marateck escapes under the most amazing and bizarre circumstances. At times he and his comrades face an enemy within the Czar’s army more fearsome than the nation’s military enemy at their borders.

Barely surviving terrifying battles, the brutality of his own soldiers, and being sentenced to death by his own officers, Marateck faces it all with humor, faith and courage. He later joins the Polish resistance whose membership desperately wants to end the reign of Czar Nicholas II.

After being captured, he is sent to a terrifying prison camp in Siberia, where very few prisoners survive the brutality of the vile Gulag and the notorious Siberian winters. He eventually escapes with a very colorful character known as “The Warsaw King of Thieves.” Together, with no official papers or money, they travel more than 3,000 miles home.

Jacob Marateck is an ordinary man forced into extraordinary courage by experiences that include a lifetime of dreadful events wrapped into the eventful years of his youth. The incredible tales of war and courage, faith and death reveal unforgettable individuals and astonishing experiences. For the reader, this knowledge is a swift, unrelenting trip down a shocking rabbit hole of incredible and frightening reality.

These conversations, events that should have been muddied by the ravages of time and history, are rewritten with incredible detail and exquisite narrative that pushes the reader ever-onward, hanging upon baited breath with each sentence. Yet between Marateck’s notes and Ms. Kranzler’s consistent ability to wrap it into moving prose, this memoir reads much more like a thrilling novel. In some cases, truth is indeed stranger than fiction.

Marateck bares his heart through his carefully detailed notes. They become a symphony representing a brilliant, singularly valiant human life enveloped within the loving care of the author’s loving dedication. The Accidental Anarchist begins with a powerful allegro of youth, in which Marateck throws his life about in a careless affront to its sacred value.

This is followed by an adagio of pain, suffering, and grief—a period in which death stalks Marateck around every corner. Here, at the bottom of life’s deepest pit, he discovers the lament of a life unfulfilled and the precious nature of his predicament. A rondo completes the package, filled with hope and desire, tempered by experience and chastened by pure faith.

If a reader could ask for anything more from this moving, powerful experience it might include additional maps, pictures, diagrams, images, illustrations, or other cues for visual learners. On the positive side, the book includes an excellent epilogue, superb author’s notes, a fine glossary, and a detailed index at the conclusion.

Having read The Samurai of Vishnigrod would have made this experience slightly more transparent; however, familiarity with that title is by no means is a prerequisite. Through Ms. Kranzler we enter her grandfather’s heart and his life—and what a magnificent experience.