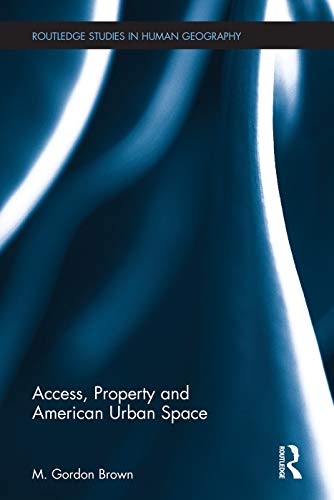 Access is scholarly yet accessible, reasoned and conversational, informed by logic and enlightened by conjecture. Concerning this last point in a section exploring the limits of language, Brown writes, “The Nile has productively overflowed for millennia, but imagine using hieroglyphics to represent property boundaries along the Nile? Maybe this is why the ancient Egyptians invented plane geometry.”

His writing reflects a multiperspective, multidisciplinary view what some might consider crosses the border into ecclecticism territory—the seriousness and significance of the subject which is necessary to appropriately approach its investigation through the application of such disciplines as economics and engineering, architecture and property, planning and politics, mathematics and philosophy, logic and law, psychology and physics, sociology and sustainability, symbolism and building construction, communication theory and construction methods.

The author attacks the subject of Access from multiple perspectives, combining policy, philosophy, meta insights, macro statistics and micro analytics. Access features numerous examples of access priorities gone array—sadly access dysfunction far outweighs effectively functioning access to hammer home the truism, that to get places right you need to get them right at every level.

Brown postulates “Horizontally, urban form is the city in plan, the shapes of buildings, lots, blocks, open spaces, streets seen as outlines on a Googleä or cadastral map.” The access system is meta in scale for, “Street spaces account for a large proportion of developed metropolitan areas, 25–40 percent, and we measure all manner of phenomena associated with them—vehicle and pedestrian traffic, width, length, surface and subsurface conditions, accidents, crime, frontage distances, for flooding and other natural events.”

He goes on to note the limitations. “Though we know these spaces are the links between countless planned and unplanned origins and destinations, we have few baseline measures, quantitative models, of the ways these spaces are put together.”

Through a number of case studies drawn from his deep background in applying spatial analytic techniques to the accessibility and physical form of functioning of places and spaces, Gordon Brown illustrates that the evaluation of design is not the exclusive province of those critics whose arsenal is limited to subjective self-referential look-and-feel critique and proclamations of aesthetic preference.

To the contrary, design can be analyzed in quantitative term for site lines, dimensions, angles, corner and spatial relationships can be identified, measured, quantified and evaluated. Through reducing to numbers, what too few realize can be subjected to analytic assessment. The resulting numbers-based analyses can provide an objective basis for understanding, assessing, and reaching conclusions concerning whether the place can and does work as intended, represented, and claimed—or not.

These case studies reinforce the learning that effective places follow from blending the right idea—as the author points out, too many of our places started with the wrong idea so were doomed from the get go—with carefully considered, site specific designs and implementation.

All too often, the negative consequences of a wrong beginning idea are compounded by designs that miss the mark and exacerbated by devil-dominated details, such as mispecifying materials that do not weather well in a place’s freeze-and-thaw winter climate.

This last point underscores the imperative that in place making, you need to consider how the place might function and cope at all times of day, in all seasons, in light and dark, at the height of summer and during the severest of winter storms.

Just as much of medicine teaching is derived from the sick and the dead—medical students spend far more time with cadavers than interacting and learning from healthy people—so, too, does the author concentrate his study and examination on detailed diagnostics and autopsies of severely sick, dying, and dead properties.

This approach is appropriate, for often in developing decision guidelines one needs to understand what not to do, if for no other reason that the universe of all of the things not to do is so much more vast than the small set of what should be done. The wisdom of this very sensible proposition was so wisely articulated in Kurt Seligmann’s trenchant observation, “How can we know the good if we do not first know the bad?” Magic, supernaturalism, and religion.

There is a very practical reason why such teaching follows from the study of the dysfunctional rather than the functional.

But beyond the site specific significance of the prospective productivity and therefore value of a particular parcel, access considerations loom large, continually realigning and changing the attributes and circumstances of competitive positions: “The ubiquity of these access changes in any metropolitan area, whether implemented to create new patterns in suburban developments or applied to existing urban patterns, eventually leads to an overall and widespread differential in spatial transaction costs benefitting uses on much larger parcels.” Distilling the key teaching of this statement:

The majority of those making real estate decisions are disadvantaged, to the extent they seek to apply the technologically disruptive and intellectually obsolete concepts of traditional real estate dogma.

Policymakers and public officials could be so much more effective in their roles and work, were they to have an awareness, understanding, and appreciation for the ideas advanced here.

As government ultimately concerns place management—as reflected by the majority of public expenditures being directed to protection, fire and safety, as well as to transit systems and public spaces—the decisions made about our places and the properties constructed in those places ultimately determine the quality of our lives, the functioning and satisfaction of society, and the competiveness of places in relationship to other places.

Add all of this up and it is a prescription of the performance assessment for a public official. That said, sadly, few public officials, even those whose training and specialized responsibilities concern physical planning issues, are sufficiently aware of this fundamental preposition presented here. So not knowing what they do not know, they proceed in benign ignorance to impose policies and programs whose actual consequences and implications exacerbate rather than ameliorate the very issues they were intended to address.

Access, Property and American Urban Space, is an important contribution in so many ways. Although the general reader may find the concepts heavy going at times—after all, one of the author’s central themes is that increasing complexity characterizes contemporary society and its places, which theme necessarily is unpacked through reasoning that at times some may encounter as daunting if not complicated—the effort required is more than worth it.

Recognized as one of the world's leading property experts Stephen E. Roulac, Ph.D, is author of The Property Knowledge System, a leading real estate textbook/learning system/professional treatise. He is a respected cultural visionary combining entrepreneurial pursuits with scholarly research, whose work is informed by insights derived from primary advisory roles to boards and C-levels decision-makers in all facets of business, government, real estate, and investing, globally and over several decades.