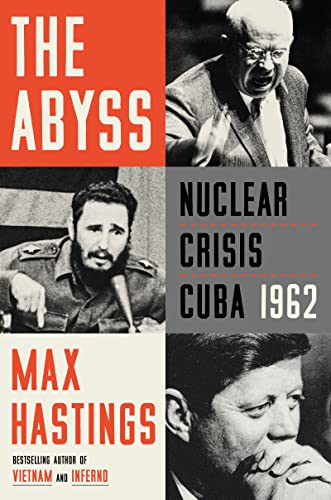 There have been a number of recent books written on the Cuban Missile crisis as this most dangerous moment of the Cold War reemerges in importance as a new war engulfs Europe and the specter of nuclear weapons begins to once again haunt the world. Max Hastings makes his contribution to this event with this very timely narrative that combines his usual impeccable research with a well-paced narrative that brings immediacy to this historical event for modern readers.

Hastings takes a wider view of the crisis as he attempts to place it within the larger context of the Cold War and Cuban-American history. Beginning with the ill-fated Bay of Pigs invasion, he provides a great deal of background on the less than perfect relations between American and Cuba, the rise of the Castro brothers, and the overall state of the strategic and political relations between the United States and the Soviet Union in the early 1960s.

He also goes beyond the usual sources on the crisis to include many interviews and diaries from ordinary people—Russian, American, and Cuban–who experienced the daily strain of waiting to see if nuclear Armageddon would happen. He also spends a great deal more ink than many other histories of the crisis examining the role America’s NATO allies, especially Britain and Germany, played in the crisis as the Kennedy Administration constantly considered the effects of their potential strategic moves on a divided Berlin, one of the major flashpoints of the Cold War, and the overall NATO alliance.

It is also noteworthy to read Hastings' perspective as both an Englishman and someone who lived through the crisis, and he is quick to offer his opinions on the major players in the crisis. He is acutely critical of the senior leadership of the Russian and American militaries, both of which were constantly trying to push their political leaders to a military solution to the crisis. The leadership of the U.S. Air Force Strategic Air Command receives some particular disdain as practically encouraging a nuclear war that they believed was “winnable” with the great American strategic nuclear superiority at the time.

As well, as Hastings notes, the very loose control of nuclear weapons at that time made the potential for a fairly junior officer accidently beginning a nuclear conflict frighteningly real. Modern readers will be rightly shocked to learn that one or two decisions by a submarine captain or a pilot could have let loose a chain of events with catastrophic consequences.

However, he rightly places most of the blame for the crisis on Nikita Khrushchev’s unbridled adventurism, and his willingness to take a crazy risk that had no chance of succeeding. The actual decision-making of both sides is sharply written and critiqued, and for the modern generation it will be illuminating to see how a group of individuals strove to make tough decisions under great stress while trying to keep the initial scope of the crisis away from the eyes of the press. As the Kennedy Administration successfully navigates the crisis, readers may also be fascinated to learn that the backroom deal to trade Soviet missiles in Cuba for the withdrawal of American missiles from Turkey was successfully kept secret for years, leading to the myth of the Missile Crisis fostered by Kennedy apologists and historians.

This book could not have been better timed as the potential for using nuclear weapons by Russia once again becomes a real possibility. One can only hope that our current crop of leaders will strive to avoid an uncontrollable nuclear exchange with the same fervor that both Kennedy and Khrushchev did during those tense days of October 1962.