Into the Abyss: A Neuropsychiatrist's Notes on Troubled Minds 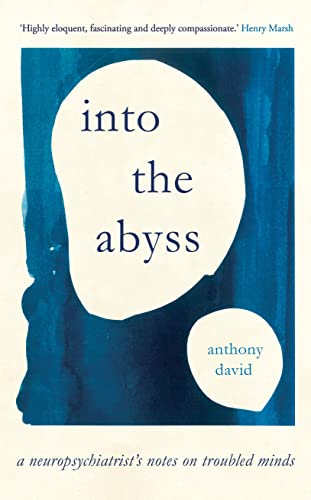 “Into the Abyss paints a fascinating picture of the ties between mind and body and the complicated ways they interact.”

Anthony David is Director of the UCL Institute of Mental Health and honorary consultant neuropsychiatrist at the National Hospital, Queen Square. For 28 years he was a consultant psychiatrist at Maudsley Hospital, London, the country’s leading psychiatric institution. A Fellow of the Royal College of Physicians, the Royal College of Psychiatrists and the Academy of Medical Sciences, he has published over 600 peer-reviewed articles and is co-editor of the journal Cognitive Neuropsychiatry and the book Lishman’s Organic Psychiatry. He also wrote the introduction to the Penguin Classics edition of R. D. Laing’s The Divided Self.

David describes himself as a “neuropsychiatrist,” differentiating between his approach and that of more traditional psychiatry. He does not clearly define the term in the book but gives examples of patients that he has worked with using his therapeutic modality. The International Neuropsychiatric Association in 2005 defines neuropsychiatry as “a field of scientific medicine that concerns itself with the complex relationship between human behaviour and brain function, and endeavours to understand abnormal behaviour and behavioural disorders on the basis of an interaction of neurobiological and psychological-social factors.” Thus, the field represents a holistic approach to mental disorders that takes into consideration both biology and psychology.

Into the Abyss is a challenging, stimulating, and sometimes troubling look into the minds of some very complicated and very disturbed patients. These men and women do not represent ordinary, run-of-the-mill patients whose problems can be resolved with some talk therapy or judicious use of antidepressants, antipsychotics, or other types of medications commonly used to treat those with psychiatric disturbances.

The treatments involved often require a mix of pharmacological agents, more conventional psychotherapy, treatments such as transcranial magnetic stimulation, and some basic problem-solving of a difficult living situation. The problems are complex, and the solutions often take a long period of time. In some of the cases described, the process is still ongoing, with no “Eureka!” shout of success yet.

The patients described fall under some standard psychiatric diagnostic classifications. Cases of depression, bipolar disorder, schizophrenia—these and other psychiatric disorders have some fairly standard treatment approaches that often are successful. The patient case histories found in Abyss are much more complicated and illustrate well the need for a holistic approach to treatment. A patient with schizophrenia develops symptoms of Parkinson’s disease as a result of her drug treatment. This complication triggers more psychiatric issues that then have to be dealt with. Treating an individual with traumatic brain injury required much more than the neurological and physical aspects of the problem; the patient was left with an altered sense of who he was and his perception of reality.

The cases described in this book are certainly not characteristic of the patient load for the average psychiatrist. They do illustrate the interplay between the emotional and physical that, to some degree, affects all of us. Into the Abyss paints a fascinating picture of the ties between mind and body and the complicated ways they interact.