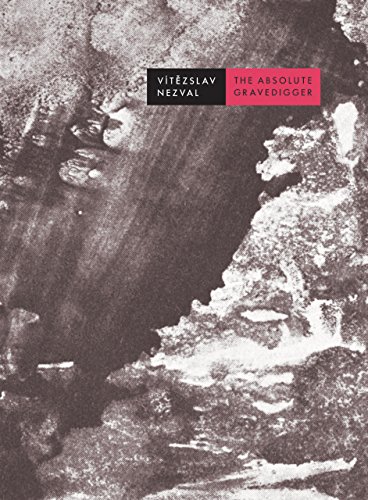 As translators Stephan Delbos and Tereza Novická explain in the Afterword, Nezval’s most famous poem, “The Iberian Fly,” had to be “emended” to make it publishable due to “the increasing censorship of inflammatory statements against the Führer and his Reich.”

Delbos teaches at Charles University and the Anglo-American University in Prague. Novická is a student in the American Literature graduate program at Charles University. The translating duo make for a creative partnership, especially with the challenging task of rendering into English what had sounded elegant in Czech.

The poetry itself exhibits a sensual weirdness combined with a dark undercurrent of violence. In the titular poem, Nezval says,

Consumes one of his putrid workaday lunches

While from his right eye

A button-sized bluebottle takes off at intervals

Through an open window

Under a gallows made from rakes festooned with cornflowers / and the guts of small field mice.

The collision of beauty and ugliness, birth and decay, and comedy with violence bring to mind the stop motion animation of fellow Czech surrealist Jan Švankmajer. The Absolute Gravedigger brings together many of Nezval’s longer and shorter pieces.

The collection opens with the long poem, “A Man Composing a Self-Portrait Out of Objects.” Shorter pieces make up “The Windmill” while “The Absolute Gravedigger” has five long-form surrealist portraits. “Shadowplays” has shorter works and “Bizarretown [1–43]” is a collection of strange vignettes. The collection concludes with “Decalcomania,” a work involving the marriage of word and image, and ends with the notorious work, “The Iberian Fly.”

Here is the 35th poem from “Bizarretown”:

On an indigo carpet

With a bullet-ridden top hat

Like the best surrealist poetry, the short poem exhibits a concise dream logic. It doesn’t make sense in any rational way, but surrealism works to derail reason and mechanistic determinism. In Nezval’s own words, The Absolute Gravedigger “strives to spontaneously and systematically objectify and concretize irrationally subjective images springing from associative automatism.”

In layman’s terms, he seeks to make the make randomly generated images into tactile objects. Nezval wants to create a system whereby automatic writing can become as real as a sculpture in an art museum. An example of this “concretized” poetry is “The Plowman,” here’s a representative passage:

An accretion of saliva

Treading on the whalebone of roots

These passage, remarkable for their non-abstract imagery, accumulate and increase in intensity. Each successive layer building up an excess of visuals and activity. The dreamlike images become mythical yet feeling very real. The plowman, a staple of rustic paintings and bucolic narratives, gets deconstructed and then rebuilt in a barrage of kaleidoscopic imagery.

“The Iberian Fly” is the showpiece of the entire collection. Here Nezval welds his poetic powers to real political targets. As Delbos and Novická explain, “Nevertheless, the poem’s horrifying depiction of life and politics in Europe during the Spanish Civil War cannot be ignored.” It radiates a nightmarish fury:

The left wing of the Iberian fly was adorned

And a sparkling gilded cross

To baptize their hairless children

To copper crosses suspended from their alabaster necks.

When art is made subservient to a political cause, the end results often are didactic and shrill. Nezval’s poem melds art with a political cause yielding a masterpiece on par with Picasso’s Guernica. (Delbos and Novická use this comparison.)

The assertion that politics somehow degrades art is a false premise. This assumes political art is inherently derivative. What happens when it is done well? Nezval is a political poet like William Blake, subsuming his fury and despair into a wild cosmology. Published in 1937, The Absolute Gravedigger would be a final creative spurt from a free Czechoslovakia before the nation would disappear underneath the black sun of the Nazi Anschluss and occupation.