Absence of Mercy: A Lightner and Law Mystery 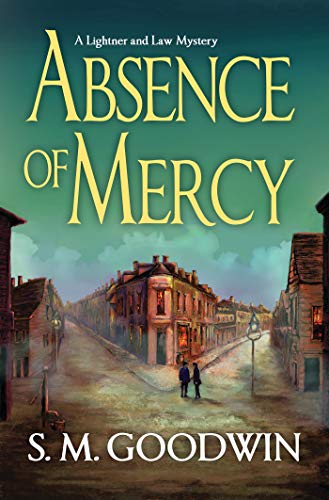 “A Scotland Yard inspector, dropped into the gang-dominated circumstances of New York City shortly before the advent of the Civil War, must overcome cultural prejudices to solve a series of murders.”

Jasper Lightner is many things: a Crimean war hero and a much-decorated Scotland Yard inspector. Besides having a stammer, his war injuries have also made him a partial amnesiac. Jasper’s worst handicap, however, is that his nominal father is the Duke Of Kersey. Because of this, Jasper and the Duke are always at odds over the so-called “embarrassment” the Duke is caused by Jasper’s exploits in crime detection.

The Duke has attempted to use his power, influence, and money to keep his son out of the public eye, and when a request comes from New York City asking for someone from Scotland Yard help train detectives for the metropolitan police department, he thinks he’s at last found a way to keep Jasper in line.

He thinks wrong; faced with leaving the department or going to the States, Jasper accepts the challenge.

A challenge it is—the mayor’s office welcomes him, but the man who’ll be his commanding officer is resentful and not afraid to say so; many on the force are corrupt and on the payroll of the Five Points gangs.

“The captain had been insulting, combative, and rude—three behaviors Jasper found abhorrent. They were also three behaviors guaranteed to bring out his contrarianism. If Davies wanted to be rid of him, he’d gone about it the wrong way.”

Also, the one man Jasper chooses as his second-in-command is currently imprisoned in the Tombs for assaulting his superior officer.

As if any of these aren’t reason enough for Jasper to catch the next boat back to England, one of the men who asked for him has just been found murdered in a questionable part of town, the fourth death of a prominent New Yorker recently, all strangled, then stabbed, and a large piece of flesh cut from their sides.

With Allard Janssen’s death, Jasper is introduced to New York’s upper class in the form of several society wives, all of whom are equally unwelcoming, especially Hetty Dunbarton, widow of one of those recently murdered.

“I’d heard you were pretty, but the rumors didn’t do you justice, Lord Jasper. What a blessing that you stammer, otherwise you’d be perfect. I daresay such a small flaw shan’t deter my countrywomen from flinging themselves at your feet.’”

Now Jasper has to prove he’s able to withstand not only the resentment of the New York Metropolitan, but also the scorn of the wives of the Upper One Hundred.

With disgraced Hieronymous Law as his second-in-command, the inspector will become quite familiar with people on both sides of the social strata, from prostitutes at Madame Solange’s in Five Points to the palatial residences of the wealthy. He will also develop an attraction for Hetty.

Discovering the motive for the men’s deaths will take Jasper on a circuitous journey into a spiral of conspiracy, spreading out like tentacles to include some very prominent citizens, then gradually dwindling into a single specific and very basic hatred whose discovery will have heartbreaking results for the visiting Englishman.

A rather unusual historical mystery, in which a Scotland Yard inspector, dropped into the gang-dominated circumstances of New York City shortly before the advent of the Civil War, must overcome cultural prejudices to solve a series of murders.

Jasper’s use of the scientific methods employed by Inspector Vidoq of Paris are enumerated in detail and contrasted with the casual and slap-dash methods of the local constabulary, which in turn strengthens their resentment against him as it also arouses their curiosity.

There’s also some humor involved as no one is certain how to address a duke’s son and inevitably get it wrong, though Jasper gently corrects them numerous times before eventually abandoning his efforts and simply answering to however he’s addressed.

It’s to be noted that there’s an enormous amount of detail in the narration concerning the denizens of Five Points as well as their “superiors” in the better parts of the city. S. M. Goodwin has done his homework, but what else would one expect from an author cited as being a college history professor?

It may be incorrect to describe a police procedural, even a historical one, as “delightful” but this story is exactly that—as well as historically realistic and brutal in spots. Since this is subtitled a Lightner and Law Mystery, the reader should be safe in assuming it’s the first in a series, and as such, may expect to learn more about Inspector Lightner, especially those “secrets” to which he occasionally alludes but never explains, while the Duke’s son solves more crimes in “olde New York.”

They’ll no doubt be received with the same relish as this original entry.