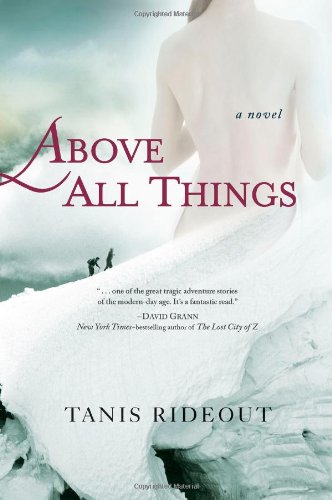 “Above All Things is a work as brilliant as sunlight bending off snow.”

Tanis Rideout’s debut historical novel Above All Things is skillfully and beautifully written.

Charmed readers will be transported back through time and space, placing them right on the slope of treacherous and majestic Mount Everest and right inside the conflicted hearts of these memorable characters.

Above All Things centers on George Mallory, the real-life, handsome, charismatic, obsessed British explorer who made his third and final attempt to climb Mount Everest in 1924. Especially compelling, this novel weaves together fact and fiction to reclaim George Mallory’s wife Ruth from obscurity, bringing her alive on the page in all her deeply affecting humanity.

Against the backdrop of war-ravaged England, George Mallory and his team of fellow explorers wage their own war against nature and geography, attempting to be the first to reach the summit of Mount Everest for the glory of man and country.

For George, the need to be the first to climb Mount Everest goes beyond passion, even compulsion, becoming synonymous with his sense of self-worth. As impossible as it may seem for someone like George Mallory, an egotistical man who epitomizes celebrity and deification, he is tormented by a deep-rooted fear of inadequacy linked to childhood, his taut relationship with his father, and his guilt because he, and not his brother, survived the war:

“Why. That was what everyone wanted to know. Or at least the ones who had never been on a mountain before. He’d never been able to explain it properly. What was there to explain? It was the aesthetics of the climb, the pull and lure of what lies just over that oh-so-close horizon. It was the pure pleasure of turning a route, a wall, of having your body do exactly what you need it to, when you need it to. But it was more than that too. There was a supremacy he felt when he stood on a summit. An ascendency.”

Drawing on letters, diary entries, media and historical documents, and her vibrant imagination, Ms. Rideout paints a complex and riveting relationship between George and Ruth Mallory.

On Everest, George is torn between deserting his wife and family and fulfilling what he believes to be his hero’s destiny: immortalized because he will conquer Mount Everest. George’s feminization of Mount Everest underscores how the mountain and his wife are the two great loves and struggles of his life:

“He’d only just returned from his second trip to Everest, in ’22. Less than a year after his first. How did she [Ruth] put up with it? All this picking her up and putting her down. In the past few years, he’d spent more time with Everest—traveling to or from the mountain, planning for it, thinking about it—then he had with his wife. What kind of a husband did that make him?”

Meanwhile, back at home in Cambridge, Ruth Mallory is waging her own private war against loneliness, her fear for her husband’s safety, and a biting sense of betrayal because her husband has chosen Mount Everest over her and their children. Just as the altitude and horrendous conditions on Mount Everest could unmoor the mind, so too Ruth Mallory feels unhinged at home:

“Some days it feels as if all I do is wait . . . I would give anything for him to be here now. So much so that I won’t allow myself to name the things that I would do without. I’m appalled by my own selfishness. My whole body hurts with crying. Burns with it. I don’t bother to collect myself. There’s no point. The garden is empty; I am entirely alone.”

This struggle between Ruth’s allegiance as a wife and her allegiance as a citizen of a British Empire reeling in the wake of World War I torments her throughout the novel.

Another central and tormented character is Sandy Irvine, the real-life youngest and least experienced climber in the attempt to “take” Mount Everest.

Sandy is also waging war against nature and geography, and against himself. He, too, is haunted by the loves and conflicts he’s left behind in England. It’s also through Sandy’s point of view that we further understand George Mallory; the grueling, impossible conditions on Mount Everest; and the great sacrifices this group is making—the explorers and the “coolies” (supply-carriers) alike.

Sandy’s naïveté regarding the true horrors of Everest ironically mirrors that of “veterans” George and Ruth Mallory and of all the explorers, and his pilgrimage on Everest reads less as a coming-of-age story and more as a coming-to-humanity tale:

“‘I don’t know.’ Sandy’s tone was slow and measured, or perhaps it was the altitude. George leaned toward him and Sandy’s voice picked up. ‘All that religion seems an excuse. I’ll keep God to myself, I think. I want to climb Everest for the achievement of it, not because it’s for or against someone’s idea of God.’”

Ideas of God, of glory, of perfectionism, of what endures, of faith and honor, duty and love, failure and success, passion and prudence, guilt and shame, heroes and fools—all powder this novel like multifaceted snowflakes—ideas that will fuel many worthy discussions among readers and critics alike.

Similarly, readers and critics cannot but get excited about Ms. Rideout’s marvelous gifts for writing and storytelling. “‘It’s what he [George] does, Ruth. We all know that. George tells us stories. And all of us are better in his stories.’” All of us are also better in Ms. Rideout’s novel—and better for having read it.

Above All Things is a startling and timeless work about our deepest desires, driving obsessions, and our insatiable need to be loved. Ruth Mallory and Mount Everest are both representative of whom and what we don’t always love as we should.

“When I was small,” Ruth Mallory tells us, “I imagined love as something safe, something without sharp edges, only the sweeping, enveloping curves of romance and happiness. But it isn’t. Not now, anyway. There are edges and they cut.”

Above All Things is a work as brilliant as sunlight bending off snow.