About Face: The Secrets of Emotionally Effective Advertising 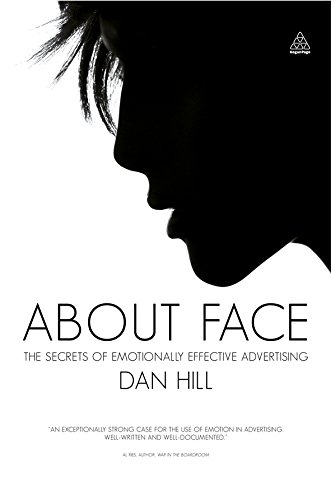 This book is exactly what you hope it is, which is plenty.

Based on years of watching what actual people do when confronted with various examples of advertising, Dan Hill has developed a lot of ideas about what works, and why. And he lays out a good many of them in this fast-paced, fact-based treatise on how to do advertising more effectively.

His message is clear, and clearly presented: “This book is about how 21st century marketing can realize success by being on-emotion, first and foremost. Being on-message remains a vital but secondary strategy, a way to plug in just enough ‘facts’ that the rational mind, searching to justify a choice, can find them . . . and therefore, feel confident about the purchase.”

Because each of the five senses is handled in a separate part of the brain, Hill also believes that engaging more senses is automatically beneficial to the advertiser, because more brain activity comes into play.

Rather than offer one-size-fits-all prescriptions, however, Hill focuses on providing research results, insights, and guidelines. For Hill, “This is a book dedicated to exploration.”

It’s a slim volume, but there is a great deal in these pages to explore.

Hill covers the importance of passion, purpose, and personality in effective advertising. He reminds us that successful “advertising is a seduction, not a debate.” In fact, Chapter Seven is titled “Always Sell Hope.”

He offers us proven models of what controls human behavior, including the four basic drives, to defend, acquire, learn, and bond, as well as some other motivations to which successful advertising must appeal, including empowerment, attachment, self-esteem, and enjoyment.

He also breaks down the demographics of those on the receiving end of advertising into such “emotional target markets” as people who are seeking self-expression, affirmation, nurturing, exploration, interpersonal connection, and causes to support.

While emotion is central to Hill’s theme, he understands that text plays a role in most advertising, but cautions that it should address emotional benefits, remain simple, and aim to add just one more adjective to a product’s identity.

Hill’s chapters cover what he considers the most important elements to include in advertising:

• Stopping power
• Engagement
• Likability, familiarity, assurance, and comfort
• Faces—if only because we have specialized brain apparatus dedicated to decoding what faces convey
• Memorability
• Relevance—if only to address such consumer concerns as “why should I care?” and “how will buying your offer make my life better?”
• Happiness and hope—within the limits of honesty
• Mirrors of the target market’s values—selling them on themselves, and
• Believability—building enough trust and reassurance to overcome today’s skepticism

There’s a whole chapter advising advertisers not to make price most important. Hill argues that people react to price-based advertising with surprise (positive at first, but it fades), and then with a loss of hope, a reduction in engagement, and a proclivity toward contempt. He offers evidence to show that leading with price produces customer dissatisfaction, and can prompt prospects to detect desperation in the advertiser—never an incentive to buy.

Hill can legitimately make all these statements because he is founder and president of Sensory Logic, a scientific, research-based consulting firm that specializes in gauging and helping to enhance companies’ sensory-emotional connection with consumers.

According to his data, people make their purchase decisions on such emotional principles as aversion to loss, resistance to change, desire for conformity, blinders to actual probability, overconfidence, impulse, and a strong sense of justice (they don’t want to be cheated).

Rather than buying goods and services, Hill asserts that consumers actually trade their money for satisfaction. They want to feel good about purchasing to fulfill their needs (or “must haves”), their wants (or what they expect to have), and their desires (or what they dream of having).

Furthermore, he claims the human brain is wired to process the “big picture” first, and only afterward to get involved in analyzing and understanding the details of an advertising offer.

Although About Face is largely strategic, Hill does wander into the weeds, particularly when revealing the results of his company’s eye-tracking research. His research shows where the eye travels over an advertisement, how long it lingers, and which locations are most likely to deliver the strongest impression on the consumer.

In a subtle pitch for new business, Hill points out that 42% of graphic designers, presumably ignorant of the evidence, place important visual elements where consumers are least likely to perceive them favorably. He also provides the fruits of some esoteric research, including a list of six “creativity templates” which purportedly describe most of the most successful ads ever created.

Essentially, Hill boils down his ideas to make some simple points:

• There are primarily only two effective paths to persuasion.
• Argument is one path, including efforts to create belief and avoid triggering skepticism or counter-argument, while
• Emotion is the other path, including efforts to create engagement and affinity by providing authentic experiences and emotions.
• Testimonials can combine successful elements of both argument and emotion.

It sounds like a simple recipe, but if it were, every advertisement would be fantastically successful. Obviously, that’s not the case. Hill’s subtext reflects advertising as a creative endeavor that can be guided by research and track records, but will never be reducible to a formula because it is always aimed at growing and changing consumers.

Writing primarily for those who enjoy and/or earn their living in advertising, Hill pretty much ignores any concerns about negative consequences, which of course exist.

For example, discussing on page 148 the dangers in today’s dialogue-oriented advertising environment, Hill refers to “the Dove ‘Onslaught(er)”parody, which points out the psychological damage done to women by the ubiquitous distortion of models in print advertising, to make them unattainably thin, pretty, and perfect. If you follow this line of advertising criticism, you'll eventually encounter The Photoshop Effect Part 2 Controversy, in which a critic of the process poignantly echoes Dan Hill’s own prescription for the advertising industry: “You’re not really selling a product. . . . You’re selling hope!”

Clearly, selling hope is not the same as selling soap, and the hope advertisers sell can be good or bad for people and society. Sadly, Hill fails to address the simple fact that some of what passes for hope in advertising is actually rooted in fear.