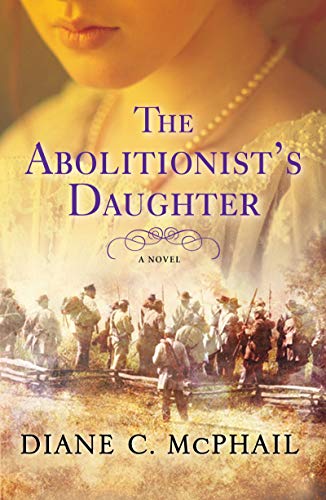 “an absorbing story sure to capture the hearts of historical fiction fans who appreciate a uniquely told tale of those willing to defy the status quo with bravery and steadfastness.”

Those who opposed slavery in the South were known as abolitionists. They sometimes lost their lives because of their principles, and while this is not the focus of this story, peppered throughout are hints of danger that could befall anyone who went against slavery.

Just before the onset of the Civil War, Judge Matthews, the patriarch of the Matthews clan, and his middle child, Emily, the only daughter, have made clear their abhorrence of slavery. This is the premise of The Abolitionist’s Daughter, a family at odds with the common way of thinking in the Deep South at the time.

Emily loves her father, holds a special bond with an older brother, Will, while her younger brother, Jeremiah, is a jealous, mean-spirited individual with no redeeming qualities. His focus is the family land, and what he believes he should have. Emily, a tender-hearted, and compassionate soul, starts off as a stalwart individual, but as she experiences loss after loss, she will become less so, as if each one chips away at her fortitude, yet she has wherewithal to see beyond her suffering.

“Emily stared at the astonishing blue of the sky, studied the interlocking pieces of it where the bare branches meandered. What she saw were not the branches, but the random pieces of the sky. Fitting together like an intricate puzzle, like a shattered bowl of half-shelled peas, carefully mended, each broken piece in place period. The scars of brokenness, she thought, are bold, yet the sky still astonishes. There is beauty in the broken.”

While Judge Matthews and Emily follow the laws of the land, adherence is not without the occasional opportunity to stand their ground in subtle ways. If you owned slaves, and even those who didn’t approve of slavery did, you couldn’t free them. This was illegal and forbidden by the government. For Judge Matthews, it’s a matter of doing what he can, when he can and one way is to purchase them, bring them into his care, educate them, and write emancipation papers for them, in the hopes one day those papers will become legitimate sources of freedom.

In the opening of the story, Emily rips a slave auction notice off a post in town, while Ginny, her faithful black servant, more a friend and mother figure than anything, warns her that her actions are drawing attention.

“People’s watching you, Miss Emily. Leave it now. You gone get someone killed.”

Emily’s close relationship with Ginny is typical of this period. Ginny has cared for Emily since her birth. Despite the warning, Emily takes the notice to her father. Judge Matthews purchases the family and prevents them from being separated. This is another chunk of moral kindling added to the anti-slavery fire that’s been periodically stoked for decades and is about to erupt in war.

While some slaves on the Matthews farm may be doubtful of the judge’s actions, they carry within them an intrepid hope that one day freedom will be theirs. Ginny, for one, having lived amongst the Matthews family for as long as she can remember, is as much a part of the family as Emily herself. She sees all and is often the voice of reason for Emily on many an occasion.

“You got three choices now,” she said. “Just like those three flowers in your hand. You can go right on letting everybody round you say what you must do. That’s one. You can say what you ain’t doing. That’s two. Or you can ponder what you want, and say it out loud. And that’s three.”

On Judge Matthews’ farm, Ginny is aware she and the other slaves are treated with kindness, given enough to eat, and yes, even as they toil and help run the farm, life for them is better than it would be elsewhere.

“On the summer kitchen porch, Ginny set whiteware and a pile of utensils on the table. She was proud of the dinnerware on the long table, spotless from her scrubbing. Mismatched glasses stood on a side table, beside two white pitchers of fresh water. All these things were something of a rarity, indeed a luxury, among Southern slaveholders. She shook her head to think many here had never eaten at a proper table before the judge purchased them.”

Because of Emily’s father’s beliefs, she lacks suitors. When Charles Slate comes calling, she finally finds herself married, but her husband uses insulting terms and has a way of thinking that isn’t akin to her own. Meanwhile, his mother, Adeline, becomes a close friend and confidante to Emily, until tragedy strikes, and with it comes heartbreak, anger, and distrust between the two families.

McPhail’s prose is vibrant with detail and descriptions without being overly done. She has the ability to create vivid imagery with select word choices.

“The Indian summer heat rose off the fields in waves of liquid mirage.”

“Beatings were commonplace enough. To be a slave was to live in a netherworld of fear.”

The dialogue, scenery, and daily routines of the characters in McPhail’s novel as well as the state of mind of the country during one of the most turbulent times in history is quickly brought to life.

This is an absorbing story sure to capture the hearts of historical fiction fans who appreciate a uniquely told tale of those willing to defy the status quo with bravery and steadfastness.