Abducting a General: The Kreipe Operation and SOE in Crete 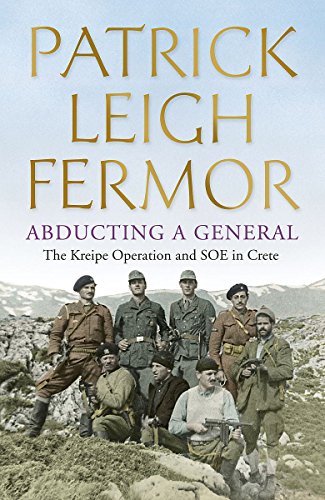 This publication is a combination of two desirable factors. On the one hand, it is a first person, “you are there” primary source document written in a style that demonstrates the author’s rather flowery prose and flair for the descriptive. On the other, it is an extremely detailed account of a rather obscure event on a lesser known front in the history of World War II.

Author Patrick Leigh Fermor was already known for walking across Europe at the age of 18 in 1933. Postwar, his publications focused on this journey and his rather extensive travels through Greece and the Balkans. Although he lived almost one hundred years, the third part of a planned trilogy about his European walk was necessarily published posthumously in 2013.

Fermor’s walk and his service during World War II laid the foundation for his later travels and his utmost admiration, most specifically, for the citizens of Crete. His efforts included an officer’s commission in the Irish Guards and, more prominently, in the SOE, the Special Operations Executive, a brainchild of British Prime Minister Winston Churchill. It was tasked with sabotage, organizing resistance in occupied countries, intelligence gathering and other duties behind enemy lines.

After several months on Crete, Fermor and his friend and right hand man, Captain William Stanley Moss, developed a plan to kidnap the commander of the German garrison on Crete and spirit him to Egypt. Unfortunately, the intended target, a particularly brutal and repressive German general, was replaced and the new commander then became their objective.

After many fits and starts, yet with clockwork precision, the plan was carried through to successful conclusion on 23 April 1944. Ambushing General Heinrich Kreipe’s car at a road junction as he was returning to his quarters that night, Fermor, Moss and their band of Cretan accomplices went on the run with their captive, passing successfully through twenty two checkpoints. Once word got out, the Germans began the process of combing the island for their commander.

As a result, it was necessary to lie low as well as to keep moving while communicating with superiors in Cairo in order to complete the operation by withdrawing the team and its prisoner from the island. This was accomplished the following month after a long and winding trip through mountainous and rugged terrain.

In spite of efforts to forestall any reprisals against Cretan citizens by leaving a letter for the Germans which specifically described the operation as being a British one with no Cretan cooperation or support, it was obvious to the Germans that it could not have been accomplished without aid from the natives and village burnings, arrests and other measures became the order of the day.

Although the abduction was criticized for being of little strategic value as the war was now very evidently going against Germany, and considering the extent of German reprisals, it was indeed one of those clandestine special operations which captured the public’s imagination by its very success. That success eventually was translated into a full-length feature film, Ill Met by Moonlight, starring Dirk Bogarde, in 1957.

Besides a glossary of pseudonyms and code names, also included with the author’s narrative of the abduction are an additional nine reports written by Fermor to his superiors in the months spent on Crete, leading up to and including the climactic success.

An additional included highlight, for those with the wherewithal, time and physical capability is a part-driving and part-walking guided tour of the abduction site and route taken across Crete by the party with its captive. The tour section also provides GPS coordinates, descriptions of related sites of interest and also has a list of recommended reading for further familiarization.

There is an index and the two maps provided are of Crete itself and detail the abduction route. A photograph section includes contemporary shots of the terrain, Fermor, Moss and others mentioned in the text and one of Fermor and Kreipe at a reunion in Athens in 1972.

In spite of Fermor’s flowery prose, sometimes to the extent of virtual run-on sentences, this account is articulate, well-written and provides many details regarding the supporting Cretan players behind the operation. For those with an interest in special operations and actions behind enemy lines, this is an informative account with enough to motivate one to obtain and view the aforementioned film for visual context.