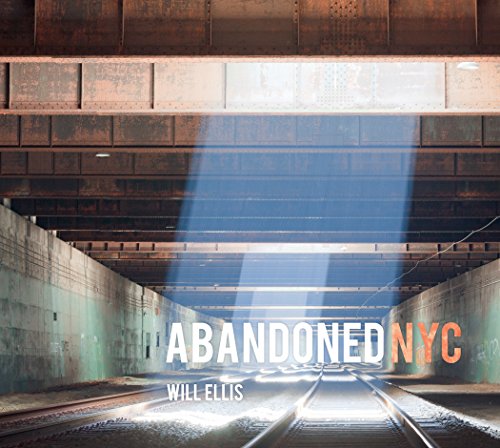 Think of abandoned anything and the mind conjures disrepair, deserted, trash strewn, graffiti covered, dilapidated, vandalized and rodent infested. These attributes evoke fear, often precipitate decline, and are unexpected subjects for a book.

Brooklyn based author and photographer Will Ellis celebrates the dark and seedy side of New York City in Abandoned NYC. He shines a spotlight on some of NYC’s forgotten landscapes that once memorably served the people of NY.

Combining photography and historical commentary author Ellis resurrects these places. Some of his images are haunting and scream out in their stillness and isolation. His well-researched history recalls the original purpose and former majesty of these hospitals and institutions, railroads and waterfronts, military installations, and industrial sites. Words and photos complement, providing an intriguing juxtaposition of then and now.

“On the once rural outskirts of the city center, urban legends hang like a fog over the ruins of New York’s old institutions. Massive, vilified, and difficult to repurpose, most of these facilities have been left to rot, becoming landscapes of regret and subjects of morbid fascination.”

In their time way back when each location featured served the city. The Gowanus Batcave in Brooklyn constructed in 1896 was originally the central power station of the Brooklyn Rapid Transit Company. The Harlem Renaissance Ballroom, completed in 1924, was a noted entertainment hub built and operated by black businessmen. Floyd Bennett Field in southeast Brooklyn was dedicated as NYC’s first municipal airport in 1931. Fort Tilden in Rockaway Queens was commissioned in 1917 when emergency fortifications were constructed in preparation for World War I.

Ellis’ depiction of Creedmoor State Hospital Building 25 in Queens, an asylum founded in 1912 to house and rehabilitate those who could not care for themselves, is particularly notable. This building stands neglected and uninhabited for 40 years. Today its only inhabitants are pigeons, many generations of pigeons.

“Pigeon poop accumulates in gray mounds under popular roosts, with the tallest columns reaching several feet in height. Like the myriad formations of a cavern, Building 25’s guano stalagmites are a work in progress-pigeons roost at every turn, punctuating an otherworldly soundscape of low, rumbling coos with violent outbursts of flight.”

Photos featuring mountains of bird shit will make your eyes widen. But even more poignantly, they symbolize Creedmoor’s scandalous history of unsanitary conditions, neglect, and abuse. Given the shameful background, these images seem just.

One admires the author’s unique ability to peer into sidelined spaces and places. His lens skillfully captures the current state of disrepair and highlights the dramatic effect of time, the elements, and even human disregard. While some images are simple representations of the current condition, others are more artful, like paintings replete with lighting, texture, and exceptional composition.

Abandoned NYC deserves attention. It is a fulfilling read especially for anyone with an interest in urban history. The visuals, coupled with rich historic detail imbue these locations with renewed energy. Abandoned NYC breathes life into these forgotten parts of the city.