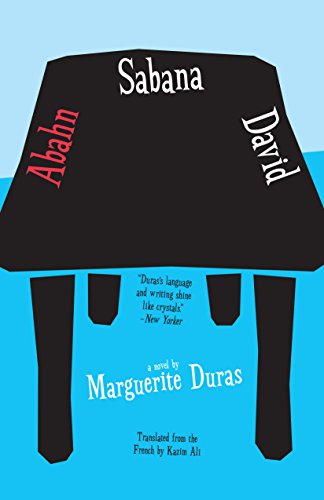 “a fable about ideological extremism under an avant-garde skin.”

Set in an isolated country house and having only three (or possibly four) characters, Abahn Sabana David by Marguerite Duras is a tense political thriller. Written in 1970, this austere meditation on ideological extremism came a year before The Lover.

Abahn Sabana David’s threadbare plot revolves around the machinations of the three (or possibly four) main characters. In an unnamed communist dystopia, Sabana and David arrive at a country house to capture and eventually kill Abahn. They work for the local political boss, Gringo. During the same night, a traveler, also named Abahn, arrives the country house. Sabana and David repeatedly call the first Abahn “The Jew.” They call the second Abahn by his name, except when they don’t. Is this second Abahn a collective fever dream experienced by the two political thugs? Is the second Abahn the same as the first Abahn? None of these questions ever receives a definitive answer. This ambivalence creates tension and mystery in the country house’s spartan interior.

Duras, ably translated by Kazim Ali, was a prolific novelist and screenwriter. She wrote during the heyday of the nouveau roman, the experimental technique championed by writers like Alain Robbe-Grillet and Nathalie Sarraute. Even more relevant to this particular novel was Duras’s delicate status as a member of the Vichy regime and the French Resistance. Hiroshima mon amour’s plot pivots around the memories of a woman who was a horizontal collaborator during the Vichy regime. Abahn Sabana David lacks the sultry tropical eroticism that permeates The Lover and Hiroshima mon amour. The novel, devoid of sensuality, exists in the realm of “terminal literature.” A stripped down prose style reigns supreme, rendering the novel’s tone icy and sterile.

“Abahn pauses. David waits. He has a look of deep interest on his face. The pack roaming the field of death growl and bark one after the other. The dogs in the park howl in response. Then, silence falls anew.” When they aren’t discussing politics, they discuss dogs. Through most of the novel, David is asleep. Occasionally he will speak in his sleep. Don’t expect any hand-holding from Duras. The unexplained remains unexplained, along with the lengthy discussions on dogs and masons. The minimalist setting and opaque situation make finding a means of entry challenging.

The characters’ relentlessly pacing and the verbal repetition are both reminiscent of Endgame, Samuel Beckett’s bleak play from 1957 and another example of “terminal literature.” Like Beckett’s play, Abahn Sabana David is a short strange work. It’s willful abstraction leads to puzzlement and confusion.

References to real-life places are kept to a minimum. Sabana and David plan to take Abahn to Stadt. Despite their affiliation to communism, Sabana and David keep calling Abahn “The Jew,” recalling the inhumanity of the Holocaust. The two Abahns throw the work off-balance, adding a wrinkle to an otherwise standard political thriller plot.

“Is it possible we were wrong,” says Abahn.
“Yes,” agrees the Jew. “Possible. Always possible.”

In chapter after chapter, conversations revolve around the same limited topics. Characters exchange positions, but become mired in the sterile and haunting situation. Sabana and David threaten Abahn(s) counters with gnostic statements until near the end where a reversal happens. Whether or not the reversal is seen as a deus ex machina or organically motivated depends on what has come before. What that reversal is will not be revealed in this review.

Open Letter deserves credit for publishing such a perplexing and strange piece of fiction. While it lacks the formulaic beats of a political thriller, Abahn Sabana David functions as a fable about ideological extremism under an avant-garde skin.