The Abacus and the Cross: The Story of the Pope Who Brought the Light of Science to the Dark Ages 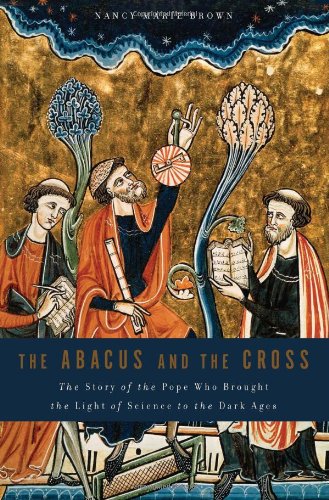 Gerbert d’Aurillac’s life as a monk, mathematician, scientist, and spy spanned a turbulent time in European history. Europe in the year 1000 A.C.E. saw a period where the political power of the Catholic Church solidified and stretched with dreams of becoming an empire before the Great Schism of 1054. This attempt was the last formidable effort, in many ways, that tried to re-establish the expanse and power of the Holy Roman Empire. D’Aurillac’s life is built on the tensions and complications of a monk’s scientific research and subsequent rise to the papacy in Europe at the end of the first millennium.

Gerbert d’Aurillac entered into the St. Gerard’s monastery in the mid-960s and quickly astounded his teachers with his quick grasp of Latin, rhetoric, and grammar. D’Aurillac continued his education with a stint of study in Cordoba, learning Arabic mathematics and natural sciences (particularly astronomy), and cultivating an appreciation for the Islamic Renaissance where Arabic was the lingua franca for religions, culture, literature, and commerce. These experiences were clearly the intellectual backbone for d’Aurillac’s later scientific work, in which he introduced Arabic numerals, an abacus, and the armillary sphere (otherwise known as an astrolabe) to Europe.

Interestingly, d’Aurillac’s rise through the Church was a result of his scientific learning and exceptional tutoring. His approach had appeal on Emperors Otto I–Otto III who had hopes of re-establishing the legitimacy of the Holy Roman Empire. D’Aurillac, in many ways, was a historical parallel of Aristotle to Otto III’s Alexander the Great. He held sway with Otto II and Otto III (having tutored them both) and helped ignite their passion for recreating the former Empire of Constantine. Caught in the intricate web of Church and politics, d’Aurillac was twice accused of heresy and once excommunicated before he was eventually appointed as Pope Sylvester II, the first French pope. With d’Aurillac’s death in 1003 A.C.E., the themes of intellect, science, and vague semblances of tolerance within Europe died with him. Novelist Michael Crichton coined the term “temporal provincial”—referring to modern contemporaries who are ignorant of the past and proud of it. He uses the term to explain a worldview where the present is perceived as the desired goal for the rest of history—a worldview where all of the values, ideas, and morals held today are assumed to have been held in the past. Crichton demonstrates that this ad-hoc placating approach to history provides the ways and means for constructing a history with the intent of proving a particular point. It’s not intentionally malicious, it’s simply and willfully ignorant of the complex contingencies of historical explanation.

Nancy Brown’s The Abacus and the Cross: The Story of the Pope Who Brought the Light of Science to the Dark Ages, systematically deconstructs any such provincial acceptance of problematic assumptions about the history of science. Ms. Brown’s history is a careful and documented story that revels in the intricacies and contradictions apparent between sources as she examines d’Aurillac’s life and influence from a variety of his correspondence and the surrounding contexts. Her history of d’Aurillac emphasizes the complexities of historical contingency without the book becoming a irritating and teeth-grinding exercise in apologetic history.

The Abacus and the Cross embodies the later Renaissance motto “Ad fontes!” (“To the sources!”) and includes fantastic illustrations and examples of Gerbert’s correspondence, his writings, and his enigmatic riddles and poetry. Her history shows a d’Aurillac as a brilliant man, with brilliant scientific insight, who gets caught up in the affairs of empire, before being appointed pope. Brown is careful to point out that it is after Gerbert’s tenure as Pope Sylvester II, that Europe’s relations with the Islamic world deteriorate and science and intellectual inquiry are devalued.

Ms. Brown’s easily readable history draws the reader into a world of political intrigue, the excitement of introducing the abacus and astrolabe to Europe, and the shaky ground that surrounding the broader culture of Europe around 1000. Her book is a useful reminder that clear and well-reasoned history is by no means simplistic. The story of d’Aurillac’s life and papacy shows a medieval milieu more complex than oft portrayed.