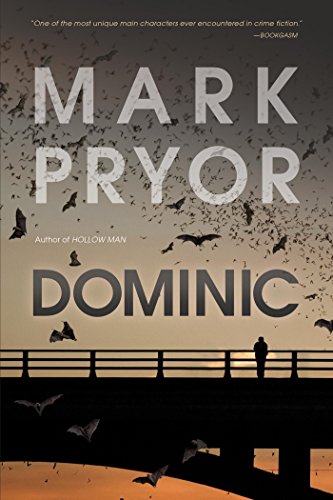 “a sometimes lonely, definitely dispassionate, journey through the mind of a man who always gets what he wants, no matter the sacrifice.”

To all outward appearances, Dominic is a charming gentleman, a transplanted Englishman and talented musician living in Austin, Texas, where he works as an assistant district attorney. Oh yes . . . he’s also a psychopath.

Dominic isn’t shy about admitting this.

“I’m not smarter than everyone else but when you have no soul or spirit there’s not much left to go on. My emotions are based on the way others express theirs. If I don’t portray them accurately it’s not for want of trying. It’s another failing of mine: a total lack of guilt.”

Dominic is currently concerned with Bobby, a 15 year old he recognizes as a younger version of himself. He intends to groom Bobby, helping him avoid any more arrests by teaching him to follow in his footsteps. He’s also in an affair with Bobby’s older sister, for whom he has a surprising attraction.

“I feel emotion when I meet a girl. It’s just more me-oriented, I get obsessed, jealous even, until I’m suddenly not.  My current situation was different, and had lasted longer than usual. Because I didn’t fool her and she couldn’t be manipulated. I wondered what it was like to feel love for another person.”

Trouble starts when a detective reopens the case of Dominic’s former roommate, serving time for the robbery and murder Dominic committed. Bobby wants to do something permanent about Detective Megan Ledsome, though Dominic orders him not to worry.

“I wasn’t helping this kid out of the goodness of my heart, I was doing it for his sister and so he wouldn’t get me in trouble. That kind of talk would get both of us in prison.”

When Ledsome turns up dead, shot in her car, Dominic has a pretty good idea who did it, and he searches for Bobby but the kid’s nowhere to be found. Now he’s really worried.

“That left me with one question: When they get him, what will he say?”

Then Bobby’s body is discovered, and Dominic is safe, or is he? Now there’s a search for a second killer, and Ledsome’s investigation is added to the mix. When a judgeship comes open, Dominic decides to incorporate his choices: rid himself of an annoying associate also competing for the position by framing him so he takes the rap for both murders, and distance himself from Bobby’s sister until the case is closed.

It may take a bit of doing. Dominic’s confident he can bring it off, but for the first time in his life, there’s a bit of doubt hovering in the background.

This novel may give some readers twinges of guilt as they realize they’re following the crimes of, and actually rooting for, a psychopath. Dominic is a protagonist rather than a hero, but whether the reader likes him or not, he will be fascinated by the way he calmly manipulates people and facts to divert suspicion from himself and onto someone he considers a necessary fall guy.

Telling the story in the first person but from various characters’ points of view may be the one down point in a perfect story. The chapter headings don’t note who’s speaking and the reader has to determine from what is said, and to some that may become confusing but only if one is unobservant.

Dominic is a sometimes lonely, definitely dispassionate, journey through the mind of a man who always gets what he wants, no matter the sacrifice. It’s chilling because there is no guilt attached to what he does, only self-preservation. It’s an entertaining sequel to The Hollow Man, making the reader wonder where Dominic’s destiny will take him next.