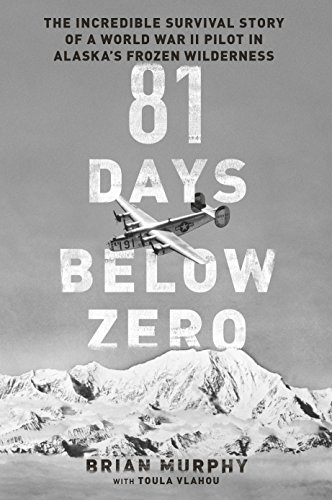 “a primer for anyone looking for information on extreme weather survival.”

Human conflict is replete with stories of individual and collective human survival, none more so than World War II. Author Brian Murphy recounts the little known experience of 1st Lieutenant Leon Crane who bailed out of his crashing B-24D bomber over eastern Alaska on the first day of winter, 1943. Amazingly, Crane’s wits, resourcefulness, and a modicum of luck were the necessary resources for him to survive and find his way back to civilization after nearly 12 weeks of snow, ice, wind, and sub-zero temperatures in the Alaskan wilderness.

Inasmuch as Alaska was a relative backwater of the war, after the Aleutian Islands, Attu and Kiska specifically, were returned to American control, combat was not anticipated and most flight sorties were for research, reconnaissance, rescue and meteorological purposes. In this case, the intended objective was research, specifically on properly feathering propellers when an engine was on fire, overheating or malfunctioning.

Without having read this volume, most people would be truly astounded that anyone was able to survive that long without shelter, food, and water; however, as it turns out, Crane was able to survive his ordeal through serendipity, luck and the aforementioned wits and resourcefulness. Serendipity played its part when Crane, properly outfitted with heavy flight jacket, wool socks and mukluks (lined boots), stopped at the Post Exchange and picked up matches. He also had the pocketknife that he always carried.

His luck helped him over another hurdle which was to parachute out of his uncontrolled aircraft, not the easiest thing to do due to centrifugal force. Unfortunately, one other crew member bailed out but did not survive and the plane’s pilot went down with the aircraft. The final member of the crew remains missing to this day.

On the ground, determining that he was evidently the lone immediate survivor, Crane’s Eagle Scout training kicked in. He kept his parachute to wear as a shroud and use as a blanket and managed to get a fire going with the matches. Although initially attempting to climb over the mountains, not knowing his exact location, he eventually decided to follow a nearby river as he knew he would need water, it was downhill, would have to come out somewhere and streams have always been used as highways in the wilderness.

Chancing upon a cabin, he had shelter while he recouped his strength, found a cache of supplies (food, a .22 caliber rifle, ammunition, tools, etc.) on which to survive and fashioned a sledge on which to pull the supplies he needed once he set off again downstream. In spite of these advantages, not everything went his way as he crashed through the river ice more than once, resulting in a freezing bath which necessitated stripping down and drying off his clothes as best he could over an open fire.

Eventually, he reached civilization in the form of another cabin, this one inhabited by a man and his Native American wife. He could again regain his strength and finally reached a nearby settlement from which he was ultimately returned, largely unscathed, to United States military control: 81 days after disappearing into the wilderness in the dead of winter, suffering only some minor frostbite to his hands.

The author has also provided two additional subplots to go with Crane’s remarkable story: What caused the aircraft to go out of control? What happened to the pilot who went down with it? At this point, after such a passage of time, it may not be possible to pinpoint a reason for the aircraft’s loss other than to consult with other B-24 veterans to reach a possible explanation.

The second subplot involves the efforts of an interested historian who researched this, journeyed to the crash site and was able to provide the U.S. military’s POW-MIA accounting agency with sufficient remains to conclude that they were those of the missing pilot and eventually buried with full military honors.

The only maps included are of the immediate area of Crane’s ordeal and an inset of eastern Alaska. There are no notes but a selected, chapter by chapter, bibliography specifies the sources of much of the author’s information. This should not be considered a deterrent. A relatively quick and easy read, it could be used as a primer for anyone looking for information on extreme weather survival. Crane proved that it can be done.