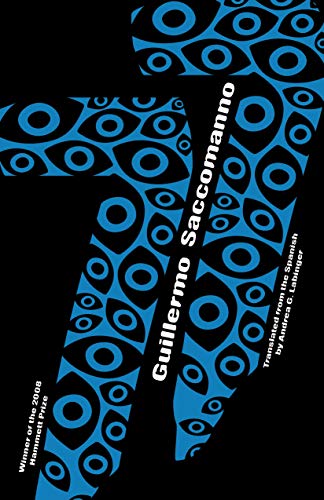 “77 is, among other things, a potent reminder of the gruesome paths of totalitarian dictators.”

Argentinian writer Guillermo Saccomanno won the 2008 Hammett Award for his political thriller 77, now in a fine Spanish to English translation by Andrea G. Labinger. It is set in Argentina in 1977 during the military junta with vivid atmospheric and visceral impact. Nothing is lost in this translation; the characters are fictitious but the political dystopia Saccomanno depicts is all too real.

Crimes of the state are detailed by Professor Gomez, a 56-year-old gay literature teacher and writer, who uses his academic dedication to hide in plain sight as he chronicles the lives of the besieged people. He witnesses one of his students ripped from his classroom, and he tries to help his friends and academic colleagues who are already being watched.

In 1977, Argentinian dictator Jorge Rafael Videla’s military government terrorized anyone deemed an enemy of the state marked as leftists, communists, intellectuals, artists, or sexual deviants. The impact was a generation lost, tens of thousands that came to be known as “The Disappeared,” mostly young student rebels or dissidents who were either killed or forced into military service.

The atrocities were so pervasive that the mothers of the disappeared assembled each week in public view, at their own peril, to publicly mourn and protest. The mistress of a former teaching colleague pokes pins in the dictator Videla’s photo to curse him and attends the weekly mothers’ protests, in scenes that evoke Dionysian tragedy.

All of these political events and personal intrigues cause Gomez to become paranoid as he lives out his lonely life in his austere flat of a creepy tenement, writing passionate essays about Oscar Wilde and Lord Byron as mysterious events unfold all around him. Every time he hears the elevator gears, he thinks the militia is about to arrest him.

He spies the green Falcons the military police use to round up suspects as they troll the streets at night and seem to dare Gomez to venture out to cruise for gay sex. One night he is questioned by the police and he later hooks up with Walter, one of the cops on patrol, married with kids, who is also on the lowdown for gay sex. And in between trysts, the professor tries to get his new lover to find out information about Estaban, his kidnapped student, in a hapless effort to help the kid’s grieving parents.

He also tries to help the son of a deceased lesbian writer who was killed trying to flee the country with her lover. Now, her son, Martin and his wife Diana, who is pregnant are working for the resistance and on the run, Diana turning up in Gomez’s apartment without Martin, leaving her to try to arrange an escape over the border trying to secure safe passage to parts unknown.

Gomez tries to help Diana but feels compromised when Martin asks him to contact a woman he is having an affair with. Diana is in the last weeks of a pregnancy and she hides out alone with Gomez. She soon vanishes as well, and the professor finds her private letters that reveal her secret life.

Gomez survives by trying to escape the terror of his reality through sexual adventures, drugs, and eventually fighting back helping the political resistance.

Gomez is both tragically real and hallucinatory on the page, fearful and courageous at once. Saccomanno vivid characters and the brutal truths of this era in Argentina is the searing backdrop of Gomez’s narrative.

One or two plot twists in the final chapters of the book strike one as contrived, but even with some of its fictive devices, Saccomanno builds the atmosphere of fear, dread, and paranoia with a cast of believable characters trying to survive under the siege of Argentina’s guerra sucia, (dirty war). 77 is, among other things, a potent reminder of the gruesome paths of totalitarian dictators.