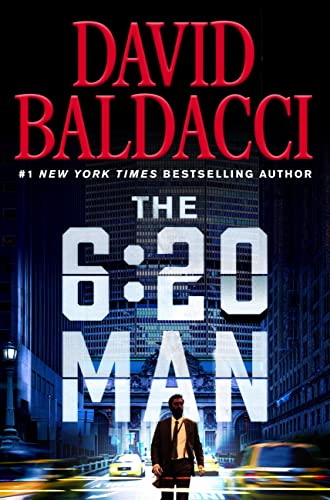 “One of Baldacci’s strongest skills is inserting a multitude of coincidences into the story while keeping it on track and not deviating or distracting the reader.”

One would think that by this time, prolific author David Baldacci would have run out of ideas, but his fans will be thrilled to know that is not the case.

Baldacci’s new book, The 6:20 Man, is what keeps him on top of his game. He opens the book with a good hook, “Travis Devine took a shallow breath, ignored the heat and humidity that was rising fast along with the sun, and rushed to board the 6:20 train, like it was the last flight out of Saigon.”

Travis Devine, Baldacci’s newest hero, is an ex-Army Ranger who carries a lot of baggage from his military experience. In a desire to please his overpowering father’s demands that he be financially successful, as are his brother and sister, when Devine leaves the army, he earns his MBA and finds himself in a mundane job with the powerful Wall Street financial firm of Cowl and Comely.

A boring job at the lowest rung on the business ladder, one that barely keeps him alive in New York, a town where nothing is affordable, Devine asks himself, Why?

Devine shares a flat with three other people: Will Valentine, a Russian émigré who is a world class hacker; Jill Tapshaw, a brilliant computer specialist who runs her romance matchup business from her home and small office; and Helen Speers, a recent graduate from law school.

His boring daily trek on the 6:20 train into the city begins with a ride that makes a stop next to an uberwealthy man’s house. This is the only interesting part of his daily slog, when a well-toned young woman in a really small bikini strips and dips. The train starts up again, and the 6:20 returns to boredom.

Now here is where Baldacci begins laying out the very coincidences that Devine does not believe in. On this particular day, coincidence seems to become a part of Devine’s life when he receives a mysterious email, “She is dead.” When he arrives at work, he learns that a coworker, Sara Ewes, has committed suicide in an office supply closet.

Devine doesn’t like coincidences, especially when they involve him, and indeed Ewes’ death involves him, as he had dated and slept with her. Only one time, but then again, it doesn’t take more than one time to make a coincidence.

After work that evening, Devine begins his investigation of Ewes’ death by investigating where she died on the 52nd floor of the building. But he finds much more when he sees the owner of the firm, Brad Cowl, having sex with another of Devine’s coworkers, Jenn Stamos. Curious, Devine follows Stamos to a small bar where he finds himself engaged in an alley fight with three men, the leader of them a WASP named Christian Chilton. Devine’s army training kicks in, and he easily overcomes the three young toughs.

Devine approaches Stamos and learns that Ewes and Stamos were in love. Within a few days, Stamos is found brutally murdered—another coincidence?

Baldacci throws in another twist when Devine is called to a small restaurant to meet a retired army general, Emerson Campbell. Campbell knows about Devine’s military past and the secrets he carries, and Campbell offers Devine the opportunity “to serve your country again as a member of the Office of Special Projects.”

It’s that or go to prison for his previous military crime. The project? In his capacity as employee at Cowl, find out the company’s darkest secrets in money laundering. Devine accepts.

And they keep coming when Devine is summoned to Cowl’s home for a talk—the home where the beautiful young woman, Michelle Montgomery, swims for the benefit of the men traveling on the 6:20. Yet another coincidence when Devine encounters Christian Chilton at Cowl’s mansion.

Devine is approached by NYPD Detective Karl Hancock who is investigating Ewes’ death, and it doesn’t take long for Devine to learn that Ewes did not commit suicide, but was murdered, and he is a prime suspect. But what is Devine to make when two homicide detectives approach him, and he learns that there is no NYPD detective by the name of Karl Hancock?

Baldacci creates a maze that continues to grow, and each twist and turn becomes more coincidental. Sara’s parents arrive from New Zealand, and in an attempt to learn more about Sara and why she died, Devine approaches them. Within days, they are murdered.

Four deaths, all associated in one way or another with Cowl and Comely, cannot be anything more than coincidence, and Devine doesn’t like coincidences.

Nine deaths in all. By the time we reach the final climax, and each character is put in his or her appropriate place, we’ve figured out who the real murderer is . . . or have we?

It should be noted that Baldacci’s characters are not always what they seem, and discovering their reality is part of the intrigue of The 6:20 Man.

One of Baldacci’s strongest skills is inserting a multitude of coincidences into the story while keeping it on track and not deviating or distracting the reader.

It is obvious that Baldacci did his homework regarding military protocols and Wall Street financial inner-workings, and he converts what he learned into easy-to-understand details.

The only thing that Baldacci leaves unanswered is the character of Rachel Potter, a nosy TV news reporter. She appears only twice in the story, and not again at the end. Her role, although a well-developed character, is not finalized. But if that’s the worst that can be said about The 6:20 Man, we can disregard it. It’s clear that this story is a keeper. We can only hope it is the start of another series by David Baldacci.