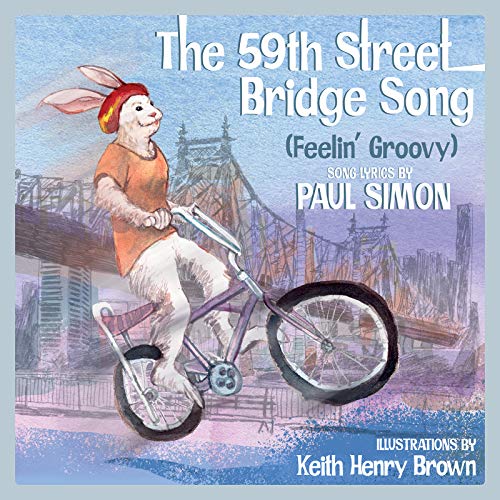 The 59th Street Bridge Song (Feelin’ Groovy) is one of the latest additions to LyricPop’s collection of favorite song lyrics by renowned songwriters transformed into illustrated picture books, with a mission to instill a love of music and song among young readers. Parents and grandparents of today will recognize singer/songwriter Paul Simon’s hit song that was originally released in the 1966 Simon and Garfunkel Parsley, Sage, Rosemary & Thyme album.

With 12 Grammy Awards, a Grammy Lifetime Achievement Award, three Albums of the Year, and membership in the Songwriters Hall of Fame as well as the Rock & Roll Hall of Fame, Simon is arguably one of the most talented and prolific songwriters of our time. His lyrics in Feelin’ Groovy inspire the young reader to pause and enjoy life’s little moments, “Slow down, you move too fast, You got to make the mornin’ last/Just kicking down the cobblestones, Lookin’ for fun and feelin’ groovy.”

Feelin’ Groovy is an ode to New York City in which Simon takes delight in sharing his beloved city as well as an appreciation of the smaller beauties within it, “Hello lamppost, whatcha knowin’? I’ve come to watch your flowers growin,’” He captures such joy with his contagious refrain, “Doo-ait-n-doo-doo, feelin’ groovy, Ba-da-da-da-da-da-da, feelin’ groovy.” He encourages all that are listening to be carefree and live in the moment, “I got no deeds to do, no promises to keep/I’m dappled and drowsy and ready to sleep, Let the mornin’ time drop all its petals on me.”

Appealing to the child reader, who is more than likely not familiar with this song, illustrator Keith Henry Brown places a rabbit on a bicycle as it ventures through the city, stopping to smell the flowers along the way. However, the use of a rabbit and this particular interpretation is less than satisfying as a visual for this delightful ditty of a song. Indeed, the rabbit is depicted inconsistently across the story and at times appears too human/adult and even kinda creepy.

With this iconic song, The 59th Street Bridge Song (Feelin’ Groovy), Simon is celebrating life itself and invites readers young and old to stop and celebrate it too, “Life, I love you, all is GROOVY.”