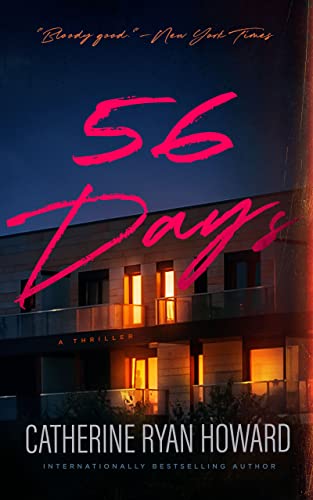 “Nothing is as it seems, and yet everything is displayed in plain sight . . .”

During the first shutdown for the pandemic in Ireland, Dublin officers are called to The Crossings apartment complex after the discovery of a decomposing body in a unit’s bath.

“The whole place is wiped clean. Every single surface has been wiped down through the apartment. Why would someone wipe down an apartment after an accident? Why didn’t they call for help?”

When the identity of the corpse is revealed, events take a more sensational turn. Perhaps the death wasn’t an accident, for the deceased is Oliver St. Ledger, “Boy B from the Mill River case, notorious child murderer.”

As for how he became a corpse in his own bathroom . . .

It started with a chance meeting, one of those “meet-cute” ways described in the romance novels, but it was anything but chance.

Oliver thought she was merely a pretty girl he’d like to get to know better, a normal girl in a normal setting. Though he might be considered anything but normal, for as a child, Oliver had committed the most heinous crime. He’d paid for his deviation from the norm, and was released again into society, but he was still haunted by what he’d done, still carried one secret he’d never confessed, known only to his now-deceased partner in crime. He was hated by everyone, hounded by the press and the public, though legally no one could print his name or picture. All he wanted was the life of a normal twentysomething.

Instead, he met Ciara.

Ciara had been stalking Oliver for quite some time, through the newspapers, the internet. She’d carefully arranged the meeting he thought was only a happenstance, orchestrating everything coming after.

When the pandemic strikes, Oliver see it as an opportunity.

“Two weeks. If he can convince Ciara this is a good idea, he has two weeks. When he can be with her all the time and be anyone he wants to be. Be the man she wants to be with. He can become him, finally and leave all his other selves—and their other names their dark mistakes—far, far behind.”

She couldn’t know she’d begin to feel something for this child criminal become adult, couldn’t realize she’d have to make a choice between what she wanted and what she thought she wanted.

“He’s made a decision. He’s going to Ciara the truth. Not the whole of it, but most of it. He doesn’t want to do it. He can’t continue on like this, with all the secrets and the lies and the hiding. He can’t stand to feel like this, as if he’s constantly holding his breath, waiting for the other shoe to drop, dreading the inevitable moment of reveal. He has to tell her. And then . . . well, whatever happens, happens.”

Whatever happens does happen, ending in a way neither expect, and neither wanted.

This story starts at the end and works its way through flashbacks to that point again, with countdowns of the 56 days of the title.

The story is told in a way that many sentences, taken initially at face value, may need re-reading after the novel is finished, for they then take on different meanings. Since most of the story is told in flashbacks from Ciara’s view and then the same scene in Oliver’s viewpoint, that may cause the reader some confusion, or seem redundant, but those points of view give the reader the opportunity to catch revelatory nuances in each person’s observations.

In spite of the crime he committed, it won’t be difficult to feel sympathy for Oliver, as his inner thoughts again and again replay his self-accusation and agony over what he did and how he’s still paying for it. When that last, final secret is revealed, bringing about his death, the sympathy will turn to an ironic pity. Indeed, the reader’s pity may be the only kind Oliver will get; hated by everyone, with not one ounce of compassion sent his way, no one actually cares that he’s possibly been murdered, or that he’s attempted to lead a normal life. The only emotion the others feel is relief—that justice has finally been wrought.

As with Ms. Howard’s other thriller, The Nothing Man, this one is filled with a sense of foreboding from the first page. Nothing is as it seems, and yet everything is displayed in plain sight, if misinterpreted.

56 Days is a thriller with a heavy atmosphere of tension, set during a life-and-death time in our own contemporary history.