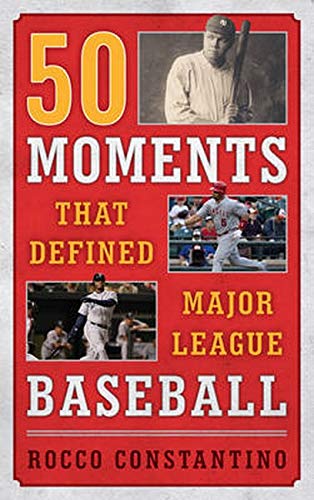 Isn’t the publishing business supposed to be imploding, with printing costs rising, and the number of titles shrinking? So you’d think that the decisions that a publisher makes before producing a book, such as who would buy this book, are well thought out.

This mess of a baseball book emanates from a decent, if well-worn, premise, as its title suggests. But the 50 sections are collected in vague chapters, “Noteworthy Debuts, Pioneers, and Baseball Firsts,” “Magic Numbers,” “Masterful on the Mound,” “Incredible Feats and Unbreakable Records,” “Tragedy, Trials and Tribulations,” “Passing Down Tradition and Influencing the Pros,” “The Immortals,” “Baseball’s Weird, Wild and Colorful Characters,” “Historic Home Runs,” “Hall of Famers’ Last Hurrahs,” “The New Millennium,” “Baseball Odds and Ends,” “Extra Innings.”

The author bases a lot of the book on a multitude of interviews, and perhaps, created 50 buckets (moments) to contain all of his quotes. Again, not a bad idea if well curated. But so many of the quotes are oh-so incredibly bland. On Pete Rose: “‘Pete was a winner and brought that winning attitude to the field every day.’” “‘Tim Lincecum burst on the scene and had more than a lot of success at a young age.’”

On Fernando Valenzuela: “‘He was so mature and confident for his age, the talk of Los Angeles . . . It didn’t take him long to win the hearts of Dodger fans.’” Again, these are quotes from former ballplayers, not a narrative shaping the book or making much of a point. So many of the quotes are reminiscences about games and players that have been covered a thousand times, and this book adds only shreds of anything new.

Regarding the writing itself, a section about Roberto Clemente begins, “Clemente’s story is well known,” and then proceeds with a two-paragraph rehash of Clemente’s early career. Not to be picayune, but an irritant to baseball fans will be a caption for Satchel Paige and Lou Boudreau that notes that the Cleveland Indians won the World Series in 1949 (no, it was 1948).

Sometimes the saving grace of sports books is wonderful photography. But here we get only 14 pages of black-and-white photos. There have been scores of Sports Illustrated-produced books over the years, broken down into plentiful sections, with wonderful writing, razor-sharp editing, and spectacular photos. This book lacks the writing, the editing, and the photos.