4th Rock from the Sun: The Story of Mars 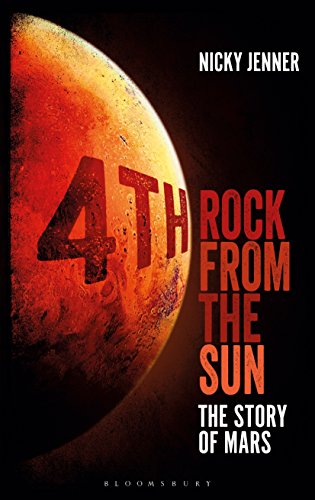 4th Rock from the Sun provides the current view of what we do and do not know about the planet Mars. Because scientists have many more questions than answers, author Nicky Jenner has placed as great an emphasis on the Mars of the human imagination as on the Mars of science exploration.

Jenner, who is light-hearted and serious in turn, has written a popular science book for those who do not like science. The first half of the book focuses on the Mars of human culture and history, as for example the Mars of Babylonian, Greek, Roman, and Chinese mythology, while the more modern Mars is seen through the lens of astrology, the occult, art, pop-culture, cartoons, games, TV, and film. Jenner is able to completely fill two chapters in 4th Rock from the Sun with plot lines of Mars related movies.

For those who are interested in science, the second half of 4th Rock from the Sun is of greater interest. Here, too, Jenner is commendable at relaying facts without imparting the feeling of reading a textbook. Readers do get the basic facts however, Mars’ average distance from the Sun and the Earth, Mars’ geology, atmosphere, weather, climate, gravity, orbit, moons, evolution—along with questions scientists still don’t have the answers to.

There are many, many unanswered scientific questions about Mars. The most significant is whether or not there is life on Mars. The significance of this question goes to an even deeper question, are we alone in the Universe? Jenner tells us, “Mars is one of the only destinations we are currently able to explore in order to answer some of these questions – and more.” And given the human penchant for exploration, determining which planet is most likely to hold life becomes a significant factor in choosing the next space travel destination. As for Mars, “[m]any prominent scientists and engineers believe that, all things considered, Mars is simply the best place to go next.”

Jenner’s recounting of Mars’ facts includes a history of scientific study of Mars, though this too retains an emphasis on entertainment—that is, what could be more interesting about Mars than the things that scientists initially believed about Mars that were later found to be wrong?

As for example, early astronomers believed the Earth was the center of the universe, and saw Mars travel across the night sky with some consternation. Mars’ orbit approximately every two years appears to travel across the Earth’s sky in retrograde motion; that is, Mars appears to reverse its direction across the night sky. In a Sun centered solar system, this can be more easily understood but was certainly more difficult to explain in an Earth centered planetary system.

Retrograde motion bedeviled the reasoning of early astronomers including Aristotle and Ptolemy. Their belief that the Earth was the center of the universe kept them “adding epicycles,” to make the planets’ orbits make sense. Later astronomers such as Galileo and Copernicus, who realized the Sun was the center of the solar system, also could not explain the retrograde motion of Mars. The solution wasn’t discovered until Johannes Kepler.

Though early astronomers’ observations were instrumental to understanding Mars’ orbit, from the 16th through 19th century our imagination about what went on on Mars’ surface remained greater than our knowledge.

As far as as the 19th century, scientists believed that the surface of Mars was Earthlike, and the surface of Mars wasn’t really understood until the NASA’s Mariner Mars missions in the 1960s and the Viking probes in the 1970s, which “gave us the first glimpse of the reality of Mars.” With these missions “[o]ur knowledge of Mars became increasingly refined and its assumed similarity to Earth began to slip away.”

Jenner addresses Mars in the context of what we know about planetary evolution, and here the mysteries of Mars start with its very creation. For two reasons, Mars does not fit into any standard theory. One, Mars formed quickly compared to the Earth (we do not know why); and two, planets tend to increase in size the farther they are from the Sun, but Mars is smaller than the Earth or Venus (and again, we do not know why). Jenner presents a number of scientists’ guesses as to the creation of Mars, and points out that of these guesses, not one holds as a leading theory.

Jenner’s study of Mars geology and geologic evolution highlights the differences between what scientists are pretty sure about early Mars and what they don’t know about today’s Mars. Scientists believe early Mars had an atmosphere that was (mostly) lost when Mars was less than 1 billion years old. There is no clear cut answer as where Mars’ atmosphere went. It is believed that some of it went into the planet’s crust, though this could not have been the dominant process. Data from NASA’s MAVEN (Mars Atmosphere and EvolutioN) mission and ESA’s Mars Express suggest Mars’ atmosphere escaped into space.

Scientists are unsure whether Mars has (or once had) plate tectonics like Earth. As for water, Mars has so much water trapped in ice in its south polar region that if melted, “it could flood the entire planet to a depth of 11 m (36ft)!”

One of the most bizarre geological aspects of Mars is that its North and South regions are incredibly different. The northern hemisphere is lower than the south by three miles, and the southern crust is much thicker than the north. The reasons for this are unclear; it’s not just Mars’ elevation and crust as evident in photographs, Mars looks as if two different halves were stuck together.

From Mars’ geography, Jenner moves on to facts about Mars’ tiny moons: Phobos and Deimos. Phobos is less than 14 miles in diameter, and Deimos is less than eight. Although Mars’ moons have been photographed by space probes since the 1960s, we still know very little about them. Of the two, Phobos has extensive and mysterious grooves on its surface, and Jenner discusses the possibilities of their cause. She also compares Mars’ moons’ creation to Earth’s moon creation.

Jenner, perhaps worried that too much science might turn readers off, provides a chapter titled The Draw of Cydonia, letting readers in on scientist Nicolas Tesla’s belief that Mars was populated with intelligent beings called Cydonians. Tesla claimed that Cydonians were trying to contact Earth. For evidence he claimed to have received signals from Mars during radio experiments. Today it is believed that Tesla was more likely to have been listening to the noise of Earth’s ionosphere.

The belief in Cydonia and Cydonians was rekindled in the 1990s by Vincent DiPietro, John Brandenburg, and Gregory Molenaar with the image of the “Face of Mars,” which was returned by the Viking 1 explorer in 1976. NASA subsequently targeted the Cydonia region of Mars and received images of the face in greater detail. These images showed the face to be an artifact of lighting, poor detail, and fevered imagination.

Jenner’s next chapter addresses the search for life on Mars, of which there are three coexisting theories. The first is that Mars has life now, which is unlikely. The second is that Mars never had life, which is possible, and third is Mars once had life but it all died, which is also possible. Jenner notes that life on Mars, if it exists now or ever existed in the past, is most likely to be microbial and underground.

Of evidence of microbial life on Mars, the most intriguing evidence has been a meteorite discovered in 1996 by meteorite hunters, known as ALH84001. A group of scientists claimed this meteorite contained fossilized Martian bacteria—a contentious claim to say the least. Since then several alternative explanations of non-biological origin have since been made.

Preceding ALH84001 in 1976, there were high hopes in detecting life with the Mars Viking lander. The lander was designed for in-situ exploration—that is, it contained a robotic chemistry kit and could run experiments. Results were inconclusive however, tending toward the negative. In the present day, the still operating Mars Curiosity rover has proven there is organic material on Mars. Organic material provides the building blocks of life, but by itself organic material is not proof of life.

Jenner writes, “Although we know that Mars was once at least partially habitable, we have no signs of life on the planet . . . While it’s possible that life existed on Mars, we simply don’t have enough evidence to confirm or deny the existence of Martian life (either past or present).”

Jenner considers what Martian life might look like should it ever be found, and how it might have evolved, and how we would recognize it should we find it. Jenner uses for her examples extremophiles found on Earth. If readers are interested in alien life and extremophiles, they would also be interested in The Aliens Are Coming! by Ben Miller, previously reviewed in NYJB.

There’s a chapter dedicated to Mars exploration by satellite and rover. Besides the U.S. missions to Mars there have been missions launched by Russia, Japan, and India. Jenner cautions, “Of all the spacecraft we’ve sent to Mars, only a third or so have been fully successful.” She explains why spacecraft missions to Mars are so challenging and why manned missions would be even more so.

There are Mars orbiters and rovers that are still in the planning stages, including a manned mission to Mars that is intended to be launched in the 2030s (which when you think about it is not very far in the future from now, less than 15 years away). For more on the manned mission to Mars, readers should Google “Journey to Mars.”

To sum up, Jenner has dedicated a significant portion of 4th Rock from the Sun to cultural artifacts that reflect more on our feelings about Mars than the science of Mars. Given that scientists know so little about Mars, perhaps this is the best approach for a popular science book. However, Jenner has not done her due diligence with respect to science. Even though 4th Rock from the Sun has color photographs and an index it does not provide endnotes, a bibliography, or a “for further reading” section.