48 Hours of Kristallnacht: Night Of Destruction/Dawn Of The Holocaust 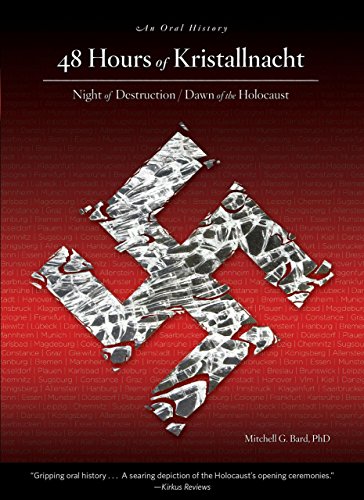 48 Hours of Kristallnacht: Night of Destruction/Dawn of the Holocaust is the story of the force of Nazi Germany inflicted upon innocent Jews in the days leading up to World War II and the Holocaust. Author Mitchell Bard offers multiple views of this intense episode of malice, as seen through the eyes of German and Austrian Jewish children. 48 Hours of Kristallnacht carries the reader through the shock of homicide, firebombing, and religious persecution. This is not an evil created by the mind of a horror-fiction writer. These are the true recollections of Kristallnacht victims, primarily innocent children, masterfully retold by Bard.

Between 1935 and 1938, anti-Jewish Nazi laws had become ubiquitous throughout Germany and Austria. On the nights of November 9th and 10th of 1938, rampaging mobs of Germans and Austrians engaged in widespread murder, plunder, arson, and attacks against innocent and unarmed Jewish civilians. In less than two days, the calm, quiet existence of Jewish life in Germany and Austria came to a horrific halt at the hands of of Nazi Germany. With gripping tension, Bard unfolds this infamous incident as witnessed by Jewish children.

Bard employs the anecdotal recollection of surviving children and unprecedented compilations of archived forensic research to describe the compelling events of this night, now known as Kristallnacht (the night of broken glass).

In one unbelievable night, hundreds of synagogues and thousands of Jewish homes and businesses were attacked and burned, while firefighters simply observed, rather than put the fires out. They had been told to protect the nearby homes of gentiles only. In one night, hundreds of Jews were murdered, their possessions looted, and their holy books defiled and destroyed. This was the beginning of the persecution, deportation, forced labor, and murder of six million Jews. At least 30,000 Jews were arrested that night and sent to Nazi concentration camps. Most of them were never seen again.

Weaving history with storytelling, Bard takes us on a journey through one of the most shocking nights in the history of the Jewish people. Nazi leadership wanted to “teach Jews a lesson.”

Throughout the frightful night, angry mobs destroyed Jewish property. The next day, the shattered glass from Jewish storefronts, synagogues, and homes was scattered across the sidewalks and streets of Germany and Austria. This well-planned event on the part of Nazi leadership and their subordinates sent a message to the entire world: that Jews were to be evicted, looted, punished, enslaved, and murdered. It told the world that Jews were “an inferior race,” to be exterminated in favor of the Aryan race.

Bard accesses a vast recollection of events, primarily eyewitness accounts, much of which had been previously unpublished. His use of the children’s testimonials weaves a unique perception throughout. While Jewish mothers and female children were typically allowed to remain out of custody that night, virtually all of their husbands, fathers, brothers, and grandfathers were immediately incarcerated and sent to prisons and concentration camps. One can feel the anguish of these children during the dreadful experience, frightened beyond measure by the pure hatred and contempt of their neighbors.

Confusion reigned during Kristallnacht as Jewish families were attacked by a combination of thugs, the SS, Gestapo and common criminals. Nazi leaders emptied prisons in order to engage the most vicious criminals to attack unsuspecting Jews. While rumors had floated for days before the event, the attacks came as a shock. The smoldering fires of burned synagogues and holy books presaged the eventual fires of crematoria as the Nazi extermination of the Jewish people began on Kristallnacht.

Because this book is comprised of dozens of vignettes, Bard lacks the ability to carry the reader forward. There is no time for character development. Therefore, we are left with something between a documentary narrative and a nonfiction account of the events. Without character development, we swim from one child to the next, witnessing horrific events, but we can never quite enter the mind of any of the characters. On the whole, the book reads more like snippets from a memoir than anything else. Nonetheless, the book is highly informative and enjoyable.