40 Years of Chez Panisse: The Power of Gathering 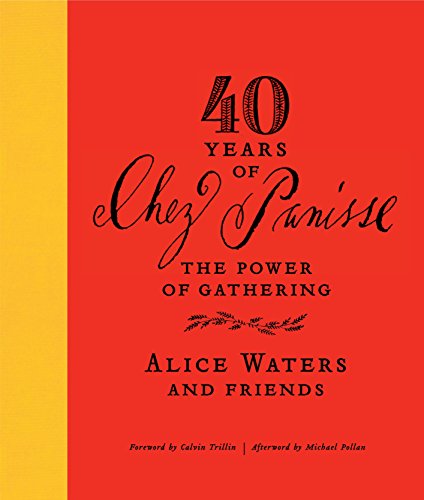 “. . . some people do change the world. Alice Waters did it by setting the table and inviting people to sit down and eat. Forty Years of Chez Panisse: The Power of Gathering tells the tale well.”

Many people dream of changing the world.

One thing is for sure: Few succeed.

In Forty Years of Chez Panisse: The Power of Gathering, Alice Waters chronicles how she and dozens of young people changed the way Americans cook and eat and grow food. Ms. Waters and her countercultural friends opened a restaurant—Chez Panisse—in 1971 in Berkeley, California. They named it after the widower Panisse, a character in Marcel Pagnol’s film Marius.

Coming of age during the socially turbulent 1960s, Ms. Waters—a trained Montessori teacher without formal culinary training—yearned to recreate the food she’d enjoyed in France. And so she did.

The many talented cooks and chefs she hired over the years—Jeremiah Tower, Paul Bertolli, Lindsey Shere, Joyce Goldstein, and Judy Rogers— went on to influence other restaurants and customers across the United States, spreading Ms. Waters’s philosophy of good, wholesome, locally grown food. As Ms. Waters says, “Under Jeremiah’s [Tower] incandescent leadership, the kitchen was bursting with boldness and nerve, as he aspired to new heights of gastronomic glory. We were flying by the seat of our pants—and every day we never knew quite what would happen.”

What happened was that Ms. Waters set off a culinary revolution. In the beginning, her search for ingredients that she wanted for her restaurant seemed more like a scavenger hunt or the foraging so typical of rural France and elsewhere: Her cooks and customers would bring in plums or mushrooms or tomatoes they’d found or grown themselves. But soon farmers and gardeners began supplying her with the produce, meat, and wine that earned Chez Panisse its laurels.

With the help of her long-time French chef, Jean-Pierre Moullé, who stayed with Chez Panisse for 30 years, Ms. Waters became a prominent spokesperson, along with Michael Pollan, for the local foods movement. Mr. Pollan contributed the Afterword to the book, writing, “. . . the rap in certain culinary circles is that what Chez Panisse does best more closely resembles inspired shopping. . . . For Alice Waters’s genius has been to show us there can be no inspired cooking without inspired shopping, and behind that, inspired farming.”

Forty Years of Chez Panisse: The Power of Gathering reads like a family album, arranged chronologically and complete with photographs of the family, which is how Ms. Waters basically considered everyone who worked at the restaurant. Many of her former employees and friends contributed passages to the book, highlighting special events in the life of the restaurant.

Ms. Waters’s comments stand out because of the larger font used to emphasize her words. Photographs of Chez Panisse’s numerous anniversaries, dishes, books, and people bring the past to life. And great food writers like Edna Lewis and Marion Cunningham, Elizabeth David and Richard Olney appear, testifying to their impact and that of Ms. Waters on the American food scene.

In short, for those looking for a history of the local foods movement and a model for teaching children about good food, Forty Years of Chez Panisse: The Power of Gathering fits the bill.

Toward the end of the book, photographs of Ms. Waters show her sitting side-by-side with Senators Tom Harkin of Iowa and Hilary Clinton, demonstrating the power she now has to influence U.S. food policy: “I told them what I wanted—food that’s good, clean, fare in every school—and they understood where I was going—and that I didn’t want to compromise.” Having politicians listening to her meant that some of Ms. Waters’s ideas could be implemented nationwide with a stroke of the president’s pen.

One of Ms. Waters’s dearest projects is idea of schoolchildren learning about food from gardening. To implement the idea and make it concrete, Ms. Waters started the Edible Schoolyard project. Promoting school gardens began in the early twentieth century, but didn’t really take hold until Ms. Waters came along, as Thomas McNamee wrote in Alice Waters and Chez Panisse: The Romantic, Impractical, Often Eccentric, Ultimately Brilliant Making of a Food Revolution, a gossipy but reverential biography of Ms. Water and her restaurant. Using her Montessori training, Ms. Waters approached the Martin Luther King Middle School in Berkeley. After much back and forth with luminaries like Bill and Hilary Clinton, Ms. Waters’s Edible Schoolyard took off.

And, with that settled, Ms. Waters turned to a more global arena, the Slow Food Movement and the Green Kitchen. She speaks eloquently of her dreams, relaying quite pointedly just what those dreams by quoting the French philosopher, Jean-Anthelme Brillat-Savarin: “The destiny of nations depends on the manner in which they feed themselves.”

Just how far Alice Waters came from Berkeley, California becomes apparent in the photograph of the Champs Élysées transformed into a huge garden created by France’s young farmers union in May 2010, to help celebrate the Year of Biodiversity in France. Two million visitors came to see the sight, to celebrate the idea that agriculture is capital for future generations.

So some people do change the world. Alice Waters did it by setting the table and inviting people to sit down and eat. Forty Years of Chez Panisse: The Power of Gathering tells the tale well.