33 Revolutions per Minute: A History of Protest Songs, from Billie Holiday to Green Day 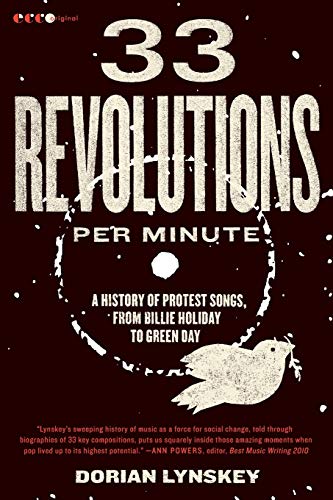 Music has power. The kind of power that causes an individual to run up a flight of stairs and start victoriously shadow boxing. Or the kind of power that touches people and makes them believe that anyone can change the world for the better, sacrificing their lives for a higher cause. Good music can make the average Clark Kent feel like Superman. Basically, music can move mountains.

Nowhere is this power more visible than in two diametrically opposed institutions: religion and politics. Since time immemorial, the church has used music to educate and enlighten the masses. With campaign theme songs to spread the party line, politics also jumped on the music-as-communicator bandwagon. Got a candidate with down-home family values? That’s great, here is an Alan Jackson song to help his constituency identify with him.

Even when people do not agree with their elected officials, songs can be used to unite various factions under one umbrella to defeat The Man. Witness the birth of the protest song. In 33 Revolutions per Minute: A History of Protest Songs, from Billie Holiday to Green Day, author Dorian Lynskey discusses the various protest songs of the 20th century, starting with the union battles early in the century and ending with Green Day’s millennial rant about President George W. Bush and his Red State supporters.

33 Revolutions is more a historical work than a catalogue of music. Mr. Lynskey picked what he considers the 33 most prominent, popular, and powerful protest songs and featured them in individual chapters. Each chapter begins by discussing the song and how it came into existence as well as the artist(s) who made it famous. The bulk of the chapter, though, is dedicated to the history of the events surrounding the song, placing the now famous tune in the larger context of the collective conscience. For example, Woody Guthrie’s chapter was nominally about the song “This Land is Your Land” that we all know and have sung at some point in our lives. But the chapter focused more on Woody’s wanderlust and union sympathies. Interestingly, this song, which has become such a solid part of the American patriotic canon, was originally supposed to be an ironic commentary on life in “free” America. Some protest songs may become so powerful as to protest themselves.

Mr. Lynskey’s title is great. For those folks who were born after the heyday of the LP, 33 Revolutions refers not only to the different political revolutions discussed here, but also to the number of times a record would spin around a turntable in a minute. You say you want a revolution, well . . . between the Iraq war and the latest round of Union disputes in Wisconsin, the 21st century might just be on its way to the next, 34th revolution.