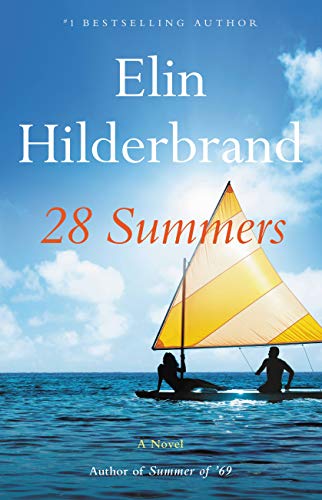 It is the summer of 1993 and 23-year-old Mallory Blessing is desperate to get away from her Baltimore childhood home. Her best friend Leland Gladstone offers to share her apartment in New York City, telling Mallory about an opening for an editorial assistant at Bard & Scribe, a hot literary magazine. She says she is hoping to land a spot at Harper's Bazaar, but she is the one who grabs the job Mallory applies for, shoves Mallory on the couch of the tiny flat on the Upper Eastside, and takes the only bedroom for herself. Mallory begins to despise her so-called, self-centered, conceited, and selfish friend as well as the noisy, bustling city, all of which are getting on her nerves.

A call from "Senior," Mallory's dad, changes everything for her. He informs her Aunt Greta has died and left Mallory her cottage on Nantucket Island. Stunned and excited, Mallory can now leave a position she hates and get a new start.

Within a few weeks, Mallory is packed and on her way to Massachusetts and lands a job as a waitress. Not long after she settles in her brother Cooper phones to tell her he is engaged and will be getting married at Christmas and would like to hold a bachelor party at her place on Labor Day weekend.

Mallory cannot understand why she inherited the property as well as a stipend, and it didn't go to Greta's live-in lover Ruth. Ruth is keeping their townhouse in Cambridge, and Greta, who knew how much Mallory loved to visit the island felt it was fitting the cottage should go to her. So, thrilled, Mallory makes Aunt Greta’s home hers, though she does not change anything about it.

Cooper arrives along with his groomsmen Jake McCloud, and Frazier Dooley for their male bash. Frazier was Leland's on and off again boyfriend for years, so when Leland calls to say she's also due to arrive, Mallory tries to put her off, but she's already booked her flight, knowing Fray will be there. So she doesn't want to spend time with Mallory, she wants to show up for Frazier—typical Leland.

The weekend turns into a bust. Cooper's fiancée calls complaining about his being there, and feeling guilty, he heads back home. Leland gets hot and heavy with Frazier at first then she takes off leaving him to be with some of her New York friends who've suddenly arrived. So upset, Frazier leaves, too, leaving Mallory to "entertain" Jake.

She shows Jake around the island, and they find they can talk about everything, which is a surprise to them both. Jake tells Mallory about Ursula, the girl he's been dating since high school, but they've broken up and reconciled so many times, Jake can't keep track. On Sunday, they order Chinese takeout and watch a video--which Mallory used to do with her aunt. Jake falls hard for Mallory, and she for him, but he's heading back to D.C. and his job, so she doesn't set her sails on him. They enjoy each other's company so much, Jake vows to return every Labor Day weekend--especially after watching the movie Same Time Next Year.

The years pass, and Jake makes his annual trek to Nantucket. Mallory has gotten her teaching certificate and obtains a position in the high school—a job she loves. Though she dates a few guys her heart belongs to Jake for after loving him no one can compare. Although Jake and Ursula are off-again, on-again, he is tied to Ursula. They share a past and though his and Mallory's relationship is intense and passionate, he believes he owes Ursula.

Jake tries to admit to himself: "He can't love Mallory . . . because he loves Ursula, though that often feels less like love and more like succumbing to some kind of witchcraft. Jake and Ursula are connected in ten thousand ways: the shared memories, the inside jokes, the secret language, the references that only they understand."

Is this a reason to remain with someone when you love someone else more?

Mallory's friendship with Leland waxes and wanes. Leland is a user, and she now has a new love—Fifi, a well-known Haitian author and a woman Leland obsesses over and flies on her coattails. Once remarkably close, Mallory does not disclose her relationship with Jake, who ends up marrying the power hungry Ursula in 1997, but still goes to Mallory’s every Labor Day weekend.

In 2000, when Cooper marries for the second time Mallory runs into Jake at the wedding. Accompanied by Ursula, Mallory bumps into her in the ladies' room where she is retching. Ursula informs Mallory of her pregnancy and is about to disclose something to Mallory, but they are interrupted so Mallory questions what she was about to say. Upset, Mallory throws caution to the wind and sleeps with Frazier only to learn soon after she, too, is pregnant. She does not love Frazier, nor does he want to marry her, and she decides to be a single mom to her son Linc. Frazier is with another woman but is involved in Linc's life and the boy spends the summer with him, so Jake can still come to the island.

The years pass from 1993 through 2020 and Jake's yearly sojourn continues. It is evident he and Mallory are deeply in love with each other, so why does Jake stay with Ursula? By now, she's into politics and so busy, she has no time for Jake or their daughter Bess. And, she has no idea Jake's heart is with Mallory. She believes his trips to are a ritual guy's get together. She's a difficult woman, yet Jake remains with her.

28 Summers prefaces the time with information as to what happened during those years, offering a bit of history as well as nostalgia. Though somewhat drawn out, this is a highly poignant love story, containing joy, pain, frustration, anger, acceptance, and disappointment, with frustration being dominant. Many subplots and backstories add depth, yet one can't help but be aggrieved with what Mallory deals with. Jake, though an upstanding man appears to be a wimp to let himself be led around by his domineering wife because of their past. Filled with every plausible emotion, 28 Summers questions the usual happily-ever-after ending.