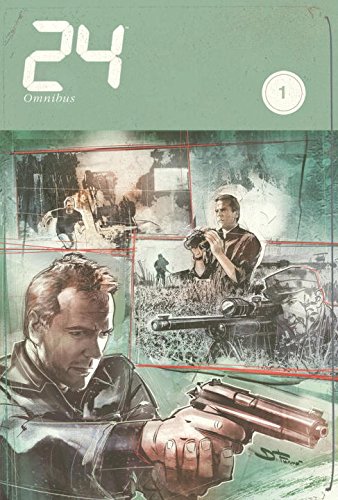 “Nonstop thrills anchored by great writing and art, 24 Omnibus Vol. 1 does the show justice. This is a perfect rainy weekend Netflix binge.”

The comic book omnibus is the physical equivalent of binge watching your favorite TV show on Netflix. As you sit there turning page after page one story rolls by and you lose track of time. In the best examples the action propels you forward, the dialogue carries you into the world of terror and the art captures your eye in a way that television never can.

Collecting five mini-series and complete story lines in over 300 pages, 24 Omnibus Vol. 1 is just that type of collection. From drug cartels to eco-terrorists, Jack Bauer is fighting the good fight on every page.

Thanks to strong writing and interesting, fully believable art throughout, the anthology accomplishes the nearly impossible. It brings the show to life in front of you. Even if you haven’t watched an episode of the series, the collection will introduce you to the world of 24 with ease and style.

Moving Bauer and his line of work into the four-color format is a natural. For at its heart 24 was and always has been a pulp.

It is adventure at its purest. In almost all instances stories center on us vs. them. With chases, explosions, danger, deception, destruction and often death forming the spine of any narrative.

While there are of course basic philosophical underpinnings to the series, i.e. good vs. bad, evil vs. right etc., the series isn’t really mythological in nature. 24 is about saving the universe, not about helping us understand our place in it.

It is a war story with cool jackets and T-shirts instead of fatigues (at least for the hero).

More than anything 24 is about law. It is a series of stories about how things are done in America. Speaking with Bill Moyers, Joseph Campbell was talking about the lack of a real, deep connective mythology in America when he said “Lawyers and law are what hold us together.” That is what governs America, law, not myth.

That is what drives 24. The legal right to do every damn thing Bauer possibly can to keep this country safe—even if it means bending, stretching or on occasion, mutating that law for the need of a greater good.

While this collection contains separate story lines, there is a momentum that builds as you read each of them in succession. Much of this is due to the team of Jeff Vaughn and Mark Haynes, who wrote four of the five stories in this collection.

While creating believable and realistic threats, both personal and national, they keep the dialogue tight and succinct. The writers respect the series and never trip over their own conceits. Their stories are razor sharp.

Adapting a show that millions watch sets up preconceptions about how people and action should look on the printed page. The art of Renato Guedes shuts down any worries about quality with his second panel in the first story.

Bauer is first seen behind the wheel of a SUV caught in traffic. The look is perfect Kiefer Sutherland. Focused, intense and as close to a familiar image as you can get. There is no doubt that this is Jack Bauer and that this is the same high quality 24 that we see on the screen.

By the third story Mr. Vaughn and Mr. Haynes are in full stride. They create a threat and scenario that would have fit right in the show. Set in the months before the third season actually begins, Bauer is undercover inside a drug cartel.

Artist Manny Clark’s photo-realistic style elevates the story to the level of an actual episode of the show. His attention to detail gives life to tight, quick action that holds more than one unexpected twist.

While he is more than capable of an explosive full page, it is when Mr. Clark portrays the action in a series of small panels numbered nine to a page that he heightens the intensity and intimacy of the conflict. By going small he pulls us deeper and deeper into the escalating panic.

This is a wide, full-screen adventure fully capturing the duplicitous, deceptive, and destructive nature of the best of the show. It also fits right into the timeline of the show adding a fuller understanding of that third season.

For Cold Warriors writer Beau Smith gives us a threat based on viral software that has caught the attention of Russia. This is the most comic-style adaptation of the collection. Artist Steve Bryant stylistically straddles decades as he uses full and half-pages for gunfire. When the action demands it he creates massive two page explosions.

With Mr. Smith’s exciting narrative as a guide, Bryant creates the feel of a classic comic book while never once making the characters unrecognizable or unbelievable.

The artists on all stories understand that the narrative needs of a comic differ from those of the TV show. The famous split screen style is used sparingly, if at all.

The clock is still ever present as the series is driven by the urgency of time. But again, the artists all use the effect sparingly to only remind us when precious seconds are ticking away.

Besides Bauer other familiar characters do show up occasionally. But the stories are always pure Bauer.

Over 70 years ago a forgotten pulp hero named Operator 5 fought a veiled version of Germany in The Purple War series. Today 24 names names and shows faces. But it is still the same idea: America is under threat of danger and someone has to stop that threat or we will all suffer.

Nonstop thrills anchored by great writing and art, 24 Omnibus Vol. 1 does the show justice. This is a perfect rainy weekend Netflix binge.