1944: FDR and the Year That Changed History 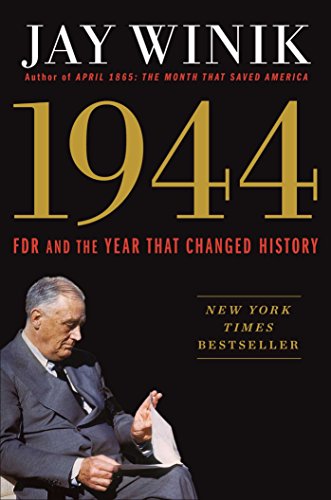 “a shocking and uncomfortable spin on the usual historiography of 1944 as the year the Allies decisively turned the war toward victory.”

A number of new books on World War II have reexamined specific battles or campaigns or offered more personal looks at small unit actions or unit histories. Attempts to write more sweeping narratives are still rare, as the scope of the material to be covered can be daunting.

Jay Winik puts his own mark on the events of 1944 with this new volume, building on his earlier bestsellers covering the crucial month of April 1865 in the American Civil War and the transition years of 1788–1800 in America and Europe. Winik does not write a traditional military history similar to works by Sir Max Hastings or Rick Atkinson. Instead, two main topics dominate this volume: the tragedy of the Holocaust and the effect of the failing health of FDR on both the Allied war effort and the beginning stages of the postwar peace.

Winik constructs his thesis by relating Allied strategy and battlefield operations to the neverending Nazi obsession with implementing their “Final Solution,” the genocide of European Jewry and other non-desirable people to their vision of Aryan supremacy. Most of the book is dedicated to the question  “What did the Allies know, when did they know it, and what did they do about it?”.

The answers to these questions are complicated by the attitudes of key Allied leaders to not only global questions about how best to win the war, but decisions about how to best help those Jews already being held in camps.

As he sets the stage for the events of 1944, Winik paints a very dark and unflattering picture of the Allied reaction to the increasing German discrimination and harassment of Jews in Germany and occupied countries, showing the incredible bureaucratic indifference to the plight of European Jews fleeing for safety.

In particular, officials in the Roosevelt Administration, especially the State Department, not only refused to consider increasing the immigration quota to allow more European refugees into the United States, they turned away Jews escaping Occupied Europe, condemning many to the camps and death.

Certainly by 1944, there was no doubt the Allies should have known what was going on at Auschwitz, the main focus of the book, and other camps. Aerial photos and eyewitness reports provided a detailed and disturbing picture of industrial-scale slaughter, but the combination of latent anti-Semitism in high officials combined with some disbelief that Germans could conduct such heinous acts created doubt outside Germany of what was happening.

Even after evidence proved what the Nazis were doing, there was reluctance by the Allies to bomb the gas chambers and cremation ovens in the camps.  Partly the Allies were not sure bombing would succeed without killing hundreds of Jews, but mostly the Allied military commanders remained focused on winning the war and were reluctant to allocate bombers and fighters away from attacking industrial targets.

The balance of the book is devoted to FDR and how his declining health, kept secret from the American voters during the 1944 election, may have affected not only the Jewish situation, but the whole postwar process. The issues of occupying Germany, what to do about liberated Europe—especially Eastern Europe, and the creation of a robust UN to keep the postwar peace—all occupied FDR's mind as his body slowly wasted away from congestive heart failure and other ailments.

Although Winik shows his admiration for FDR and his determination to see the war won, his candid description of FDR's health and his doctor's deliberate underestimating of the severity of his condition paint a clear picture of a man who knew he would probably not serve out the fourth Presidential term handily won in 1944.

Indirectly at least, Winik seems to paint a picture of an increasingly frail President driven by ego to finish the war even as he lost his ability to be the commander-in-chief.

In the final balance, Winik makes a pretty clear judgement that the Allies should have done more to prevent the Holocaust, even bombing the camps regardless of the loss of Jewish lives. The overwhelming viewpoint of the Allies that the best way to stop the killing was to defeat Hitler gets short shrift from Winik, and the reader can weigh his arguments that bombing the camps might have allowed some Jews to escape.

This book is a shocking and uncomfortable spin on the usual historiography of 1944 as the year the Allies decisively turned the war toward victory. As Winik posits in his postscript, the inaction of the Allies to take any and all actions against the Jewish genocide even as their armies were sweeping toward Germany made the discovery of the camps even more shocking to the Allied troops overrunning Germany in 1945.