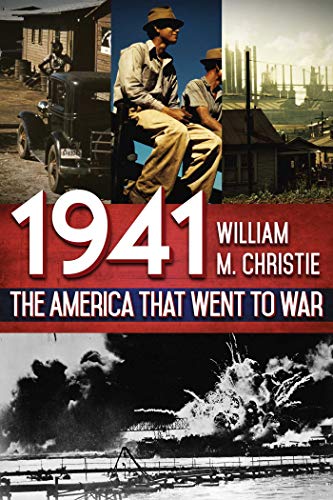 “provides a fascinating glimpse of a country passing through the twilight of splendid isolation to becoming a world power . . .”

As the 75th anniversary of the attack on Pearl Harbor nears, it is difficult for many Americans to think of a time when our country was not engaged as the dominant power on the world stage; however, that was exactly the case for America prior to December 7, 1941, and this book takes the reader back to a time when our country was still very unsure of our role in the world and uncertain about what to do about the growing global conflict as our nation finally began to emerge from the Great Depression.

Written in 12 chapters to represent the months of 1941, the author uses each chapter to present a particular subject concerning America’s culture or character of the year, covering topics ranging from sports and entertainment, to an increasingly powerful labor movement, to the burgeoning issues of civil and women’s rights.

The rapid modernization of many aspects of American life, from education, to how Americans vacationed and travelled, to the increasingly ubiquitous technologies of radio, aviation, and even television are examined in the critical transition year when America went from a peacetime to a wartime society. As a historical snapshot in time, these vignettes provide a fascinating look at America on the threshold between blissful isolation and the need to become a world power.

In addition, although the labor market was beginning to improve and head toward full employment as greatly increased defense spending and a rapidly expanding military force absorbed millions of men, the country was still deeply divided over what role America should play in assisting Britain in the war with Nazi Germany.

The debate over America’s role in the raging global war permeates many sections of the book, which examines not only FDR’s incredible political acumen in steering America into becoming an active ally of Britain, but the effect of the isolationist-interventionist debate on Hollywood, Wall Street, and even Main Street. It may surprise many readers just how deeply divided America was about supporting Britain in the face of German aggression.

Many of the most critical war winning measures, including the historic Lead-Lease program that sustained Britain and Russia with vital war material and the continuation of America’s first peacetime draft begun in 1940 were hard-fought political battles that required considerable political skill and not a little dissembling by FDR to push through Congress.

For the military historian, it may come as a shock how woefully unprepared America was for the global, industrialized, and mechanized war it was about to enter.

Like many armies, the U.S. Army still had horse cavalry units in 1941, some of which participated in what was the largest series of military maneuvers in American history, the Louisiana Maneuvers in the fall of 1941. This was a particularly interesting chapter as it described how these maneuvers and their evaluation by Army Chief of Staff General George C. Marshall hastened the transition from a hidebound military loaded with overage deadwood commanders to the war winning military led by officers who stood out in these maneuvers such as George Patton and Dwight Eisenhower.

The American Navy was also going through some growing pains, compounded by the fact, often debated at the time but little remembered in this era, that an undeclared naval war was occurring in the North Atlantic by the fall of 1941 between U.S. warships escorting convoys to Britain and German submarines. A masterful part of FDR’s covert support for Britain, these actions resulted in both the first casualties and the first loss of a warship by the U.S. Navy in combat, months before Pearl Harbor.

Once Pearl Harbor is attacked, all doubts about America’s role in the war are quickly erased and in another remarkable turn of events, the nation quickly unifies to begin the long and difficult journey to victory four years later. Although 1941 ended on a sad note for many Americans as defeat followed defeat, the clear path to victory is seen in the many seeds sown throughout the year to bring American manpower, production, and political will to bear on winning the war.

For both the general and military historian, this book provides a fascinating glimpse of a country passing through the twilight of splendid isolation to becoming a world power. The innocence and naiveté of many Americans that the intensifying war was avoidable may be difficult for modern readers to believe, but we should all be thankful that difficult decisions were made, and America was able to quickly transition from innocent by-stander to active participant in the world’s greatest conflict.