1939: A People's History of the Coming of the Second World War 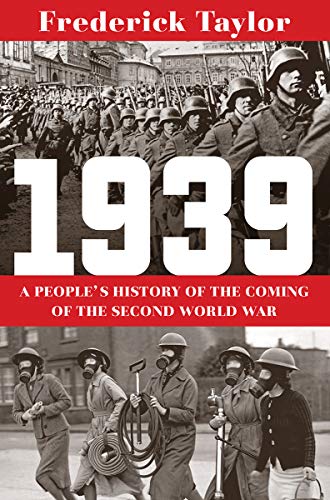 “shows how ordinary Britons and Germans lived their lives in that last year of peace . . .”

The last year of peace in Europe before World War II erupted was filled with aggressive duplicity by Hitler’s Germany combined with the hopeless naïveté by the governments of Britain and France. But looking back on these events 80 years later, it’s sometimes hard for modern readers, with the luxury of historical perspective, to genuinely understand how the Western powers could allow Hitler’s bluff and bluster to eventually push Europe into the costliest conflict of a bloody century.

This fascinating new volume looks at that critical time between the Munich Agreement of 1938 and the German invasion and conquest of Poland in 1939. Rather than dwelling exclusively on the diplomatic and military events, the author has taken personal narratives, diaries, and media reporting of the time to also show how ordinary Britons and Germans lived their lives in that last year of peace.

Beginning with the shameful and foolish appeasement of the Munich Conference, the overarching theme of the book is the desperate desire of all of Europe, including large numbers of Germans, to avoid another general European war. Still battered by the carnage of the Great War and the global depression, both Britain and France were generally terrified of a war in 1938 and gave shameful approval to Hitler’s annexation off the Sudetenland region of Czechoslovakia, worn down by Hitler’s bombast and a general remorse over the punitive Treaty of Versailles.

The Germans ran a highly successful version of what today would be called information warfare or even “fake news,” conducting a relentless propaganda war against both their internal and external enemies, leveraging the entire media of the Third Reich to bombard the German citizenry with a tightly controlled message.

Most of this message was directed against Germany’s Jewish population, and the author devotes many pages to the infamous Kristallnacht destruction of Jewish synagogues and businesses along with a concerted media campaign to turn the German population against their Jewish neighbors. Even the beginnings of what would become the Holocaust was not enough to convince Hitler’s neighbors of the need to stand up to Nazi tyranny while they still could, and as Hitler was able to achieve more with his bombast, he became more certain the Allies would avoid another war at nearly any price.

Still, the inevitability of war breaking out was never certain, and the internal debates of both the British and German governments are fascinating to see. Even though Hitler was continually tightening his grip on power and pushing Germany to war, many of his generals were leery, and even his own party leaders reported a general fear among the populace of another war of hardships for ordinary Germans. In Britain, although many politicians in Neville Chamberlain’s government finally favored a general rearmament as it became clear Hitler’s territorial ambitions were growing, the overall attitude of many Britains was also fearful of another war of hardship.

The event that finally made war inevitable was covered briefly, but its importance cannot be underestimated. The Nazi-Soviet nonaggression pact truly stunned Europe and the United States when it was signed in August 1939. Although the Western Powers were not at the time aware of the secret protocol to divide Poland between the two totalitarian states, most prescient observers concluded that with Germany’s great fear of a two front war now resolved, the likelihood of an attack on Poland was now all but assured.

When war did come it was not greeted with any of the enthusiasm World War I had initially generated, and nearly all of the civilians were fearful of what the new weapon of airpower might do to cities and how long this war might last. The author relates how the governments of Britain and France reluctantly went to war, even knowing that neither could provide any aid to Poland before Hitler’s panzers overran the country. The book ends on a very somber note as all of Europe steels themselves for another costly and long war, wondering how everything went wrong that last year of peace.

As the last of the World War II generation passes away, books like this are important to keep alive the immediacy of the time and show how great events are influenced by the actions of hundreds of ordinary people, good and evil.