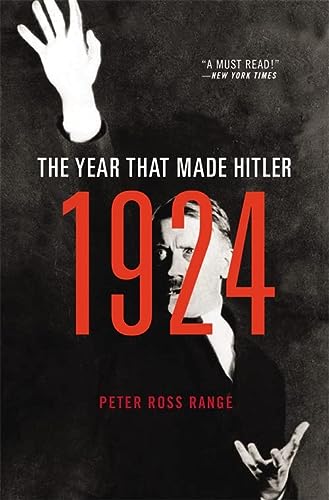 “If twelve or fifteen thousand Hebrew corrupters of the people had been held under poison gas . . . the sacrifice of millions at the front would not have been in vain.”
—Adolf Hitler,  Mein Kampf

Sometimes a year of disaster can later be viewed as a positive turning point for a political career. So it was for Adolf Hitler in 1924. This is the year in which Hitler served a prison sentence for treason; it also produced his life’s work, Mein Kampf, and the rabid commitment of aides ready to commit murder for the Nazi cause. All of this is brought into focus by author Peter Ross Range in a fascinating and complete chronicle.

To understand how Hitler came to power requires careful study of 1924. The inside stories and prophetic hypotheses produced during this year gave the world the Third Reich in all its lurid majesty, terror, and genocide. This is how Nazi Germany came to power. And it began in earnest in Landsberg Prison, with Adolf Hitler surrounded by his adoring acolytes, writing his book.

In 1923 Hitler pursues a series of failed beerhall putsches designed to lead a coup that will overthrow the German government and leave him in power as a dictator. Hitler’s speaking ability is powerful, philosophical, and perhaps hypnotic. He lacks formal education or university credentials, but his ability to verbally mesmerize a crowd is extremely persuasive.

In his long, extemporaneous beerhall speeches, Hitler proposes his vision of a united Germany, rising from the ashes of the twin disasters of World War I and a ravaged economy, restoring Germany to its former greatness will follow. But his powerful speeches are insufficient to bring him to power. To accomplish that, he also needs to give Germans enemies—someone evil to hate. Hitler required a group so benign that they lack the ability to fight back.

He found the perfect “enemy of Germany” in Jews and communists. They were few, unarmed, largely devoid of military training, and, in his mind, weaklings who lack the will to fight back.

Hitler viewed all the world in terms of race. “True Germans” (Aryans) represented the top of that food chain. He was convinced that a war between the races was inevitable and that only the most powerful race will remain. He saw this as the proper goal for the Aryan race. To become dictator of Germany, Hitler had to manipulate the best and worst angels of human nature.

Arrested for treason after a major beerhall putsch, Hitler and his storm trooper co-conspirators, plus a famous German general (Erich Ludendorff ), had to defend themselves in a courtroom surrounded by global press. Hitler decided to act as his own lawyer, despite no training or experience. This became the most critical aspect of the trial as Hitler used his time not to save himself, but to promote his political vision for Germany.

The chief justice allowed Hitler to deliver his rambling manifestos, even when it clearly was not pertinent to the facts of his crime. Local and foreign press gave Hitler an even larger platform with which to castigate the German government and argue for his vision of a nationalistic state.

During the trial, Hitler’s mesmerizing speeches manipulated the court and the judges. He took advantage of an inexperienced district attorney and soon had the judges eating out of his hands. In the end, Hitler and his direct reports were convicted and sent to pison, but only for a term of one year, beginning April 1, 1924.

The judicial slap on the wrist provided sufficient time for Hitler to consider how to gain power and to solidify his status as the Nazi leader. In prison, Hitler reinforced his abject control over a tight-knit group of Nazi followers who would one day be political and military leaders of Nazi Germany. He also decided to abandon all further violent acts that could be interpreted as treason.

In prison, Hitler decided that if Nazis couldn’t gain control by force, they could accomplish their goals via legal political activities. If he could not become a German dictator by force, he would create Germany’s most respected political party, the National Socialist (Nazi) Party. Bavarian leaders could not have known that this singular year in prison would prove pivotal in bringing Hitler to power, not with a putsch or by violence, but legally, through the German political system.

In a sun-drenched second floor cell near the front of Landsberg Prison, Adolf Hitler used 1924 to transform himself from a rabble-rousing beerhall anarchist into a viable dogmatic political candidate. He became the de-facto leader of a growing, if not threatening, Nazi party. His putsch followers became fellow prison inmates, developing a deeper and more profound admiration for the man they called, “The Boss.”

With a strong following inside and outside of prison, Hitler bided his time, wrote Mein Kampf,  and developed his plan to make Germany great again. The formative establishment of the Nazi creed occured at Landsberg. Grasping upon the devotion and dedication of his followers inside and outside of prison, Hitler began to see how to control Germany.  He blamed every tragedy on communists and Jews, urging his followers to remove or exterminate them.

Author Peter Range brings Hitler’s 1924 prison sentence to life with extensive research and powerful, descriptive writing. Range reveals the twisted, mendacious mind of Adolf Hitler through the eyes of his fellow prisoners, prison guards, transcripts of the treason trial, and the trial as it was reported by global media.

Range delivers an outstanding analysis of how Hitler used the Nazi Party to become dictator of Germany and perpetrator of genocide. He fills in the blanks from less definitive analyses of Hitler’s rise to power, albeit in a much more shallow timeline. Educational in nature, this daunting analysis of Hitler’s formative political experience began after the failed putsch and continued to the time when Hitler had coalesced political power, generating a terrifying decade of destruction for millions of innocent Europeans.

As Range writes, “Hitler did more than appeal to emotions, though he made arguments that had people nodding their heads. His heady brew of nationalism, social Darwinism and biological anti-Semitism was served up with a stiletto intellect and a prodigious historical memory.”

Peter Ross Range has covered war, politics, and international affairs. A specialist in Germany, he has written extensively for Time, The New York Times, National Geographic, the London Sunday Times Magazine, Playboy, and U.S. News and World Report, where he was a White House correspondent. He has also been an Institute of Politics Fellow at Harvard’s Kennedy School of Government, a guest scholar at the Woodrow Wilson International Center in Washington, and a Distinguished International Visiting Fellow at the University of North Carolina Journalism School.