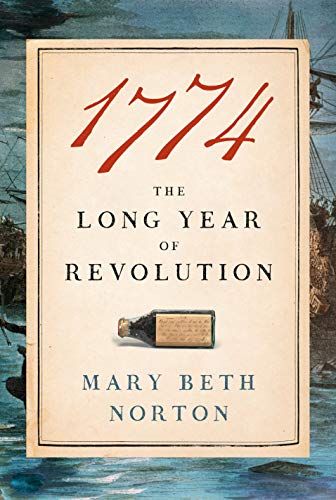 “a marvelous and thoughtful book, refuting many of the common myths about pre-Revolution colonial politics . . .”

One of the enduring narratives of early American history is that the 13 colonies were united in their opposition to Great Britain and their desire to stand up against what they perceived as British oppression and unfair taxation. However, the truth is much more complicated, and many readers of this refreshing new book may be surprised that the colonies had a vigorous and often contentious debate about how to handle their differences with the mother country right before the outbreak of actual conflict at Lexington and Concord.

Examining the critical 16 months between the Boston Tea Party and the first shots of what became the American Revolution, historian Mary Beth Norton has taken a comprehensive look at the attitudes of the 13 colonies as they dealt with issues of political legitimacy, mob violence, representative government, and taxation in these critical months, in which both colonial and English attitudes hardened to the point that compromise became impossible, and England’s colonial authority began to wane.

Modern readers may still be perplexed at the occasionally rabid reaction of the colonists to a tax on a commodity like tea, the drinking of which permeated colonial life. But the colonists were used to a measure of benign neglect by the British Parliament and Crown and enjoyed significant autonomy prior to the French and Indian War. As the author notes, the efforts by Parliament to tax the colonist to help pay Britain’s enormous war debt became a focal point of colonial political activity, energizing political activists determined to resist rule by a government across the ocean with no colonial participation.

Tea became the ultimate target of these activists, and although the Boston Tea Party has become part of American mythology, the author shows how the reaction in other colonial port cities where tea laden ships were sent was very different, with none of the destruction wrought in Boston Harbor.

The reaction of the various colonies to the overbearing British response, including closing Boston Harbor, show there were vigorous debates and much greater dissension to defying King George and parliament than generally understood. Most colonists up to mid-1774 considered themselves loyal subjects of the crown, and there was a great fear among many colonists about the substitution of local mob rule for law and order.

When the first Continental Congress was convened in late summer of 1774, the debate over how best to respond to the British “Intolerable Acts” as the colonists dubbed them showed that there were still significant divisions between those members advocating a more conciliatory tone and those wanting a harsher response.

Most of these debates revolved around implementing an economic response of cutting off imports and exports with the rest of the British Empire, and it was clear that many of the colonial merchant class were very leery of the consequences of such action. In addition, the rise of militias throughout the colonies, particularly in volatile Massachusetts, only added fuel to the growing sense of separation from the Mother Country.

The debates that swirled throughout the Congress that summer were repeated at numerous town, county, and colonial assemblies. These debates questioned the political legitimacy of the numerous committees that were formed to substitute for royal authority, in particular who should and could wield political and ultimately economic power over colonial affairs.

However, as the summer wore on and the colonists began to debate more substantive issues of politics and representation, they began to form their own system of government outside of British authority, gradually replacing the colonial courts and other measures of control and beginning the first steps toward forming a revolution.

The conciliatory mood of earlier in 1774 began to disappear, and by early 1775, the mood in the colonies bordered on open rebellion, with militia units on a hair-trigger response to assumed British action in the Massachusetts colony. The British authorities were stymied in their attempts to restore royal law and order, and the first shots between British regulars and the militia seemed almost inevitable.

1774: The Long Year of Revolution is a marvelous and thoughtful book, refuting many of the common myths about pre-Revolution colonial politics, showing that debates about loyalty to the crown and the entire concept of representative government were much more wide-spread than usually considered in American colonial history texts.