14 Minutes: A Running Legend's Life and Death and Life 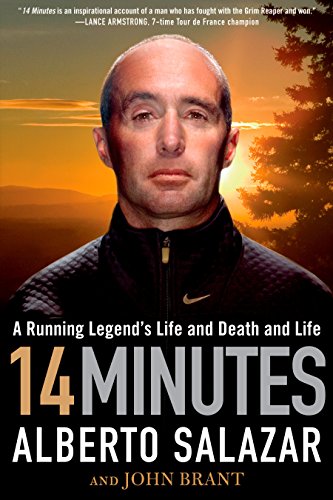 In the 1960s through the 1980s, Americans won gold medals in all Olympic distance races: 5,000 meters, 10,000 meters and the marathon. Plus, Americans were serious competitors in major marathons, including the legendary Boston and New York marathons, and set the world record.

In subsequent years however, American distance runners lagged. Alberto Salazar, the last prominent distance runner is changing all of that in his campaign to create the Great American Distance Runner.

The title of his memoir: 14 Minutes: A Runner Legend’s Life and Death and Life—refers to his suffering cardiac arrest and being clinically dead for some 14 minutes. In telling his story, he writes that becoming a world-record setting distance runner wasn’t due to physical talent: “I was notorious for my awkward stride . . . I did inherit the family traits of obsessiveness, pride and toughness . . . my father’s religious faith, and with it his willingness to sacrifice.”

Writing of his adolescent years and “the archetypical high school girl who got away; almost as powerfully psychic force as my father,” states “I carried that bright coin in my pocket, that shining, saving knowledge that I was good at something, damn good, and I was going to get even better. I was going to be the greatest marathoner in the world.”

His rise was facilitated by fortuitous circumstance: a high school friend’s driving enabling him to train at the Greater Boston Track Club, led by the legendary coach Billy Squires and featuring the “It” marathoner of the day, Bill Rogers. There he learned much, developed as a runner, and was protected by his coach’s insistence that he not do too much, too soon.

In his early 20s Alberto Salazar won the premier marathons—in New York and Boston; established the world record; and based on just several races, was recognized as the premier marathoner in the world, perhaps the greatest of all time. But after he had obtained dominant world class status, a combination of injuries attributable to mistraining and over training precipitated the premature demise of his running career.

As his running career wound down, he gained employment with Nike, the renowned athletic company, which had been his sponsor. One indicator of his stature is his being in the pantheon of the few to have a building on the Nike campus named after him.

Ultimately, Alberto Salazar his employment with Nike evolved to his leading the Oregon Project, intended to answer “the inevitable question from journalists, the same multipronged question with metronymic regularity before the Boston Marathon in the spring and the New York City Marathon in the fall, “Alberto, what’s wrong with the American distance runners? When will a homegrown American finally beat the Africans in a prime-time race? When will we see the next Alberto Salazar?”

He states, “My business remained elite distance running. I was still trying to create that Great American Distance Runner although now it wasn’t going to be me . . . I worked with the same absorption and intensity. Indeed the effort was even more consuming.

“Now there were polymeric drills, core-strength-building drills, and good old fashioned weight-lifting sessions to administer . . . like a dad, I was always on call; I could never quite relax. When one of my runners succeeded . . . I might feel good for an hour, but in the back of my mind, I’d worry . . . They say a mother is only as happy as her least happy child, and the same held true for a coach—at least for this coach.”

Describing his approach, he writes of how, “We had trained for everything; left no stone unturned. We trained for the physiological implications of heat—the consequences I had grappled with in my competitive days—and also for the psychological challenges.”

The Alberto Salazar running philosophy, implemented in the Oregon Project, combines what he learned from his Greater Boston Track Club days under the tutelage of Billy Squires, and through his own extraordinary athletic accomplishments with the “vast and vastly expensive array of technical and sports-science wizardry that Nike puts at the Oregon Project’s disposal,” implemented via an obsessive “micromanaging and over controlling style.”

Describing his aspirations, he proclaims, “Being the world’s best non-African distance runner won’t be good enough. The goal is to win. More precisely, the goal to put yourself in the best possible position to win; to do everything conceivable, ethical thing in your power before letting the imponderable—the forces beyond your control—take over.”

In pursuing his goal he seeks a third way of “training smarter . . . running with greater efficiency,” as an alternative to the two primary ways of (1) to dope, to cheat, which I have never considered—and (2) to camp on the far side of the red line, to strike a pact with the devil, jack your training to unsustainable levels and hope that you squeeze out a few transcendent races before the devil takes his due in injury and illness. This latter path, of course, was the one that I followed as a young athlete, and that, eventually, brought me to grief.”

Students of excellence, readers attracted to stories of confronting and overcoming adversity, serious sports enthusiasts, specifically strength endurance sports devotees will find much of interest in 14 Minutes is a useful, workmanlike addition to the library of sports autobiographies.

Unfortunately, the editorial focus on his health challenges—presumably chosen as doing so was perceived would attract a broader readership—and timing the publication prior to the 2012 Olympics, make this book either (a) less than complete and illuminating in its coverage, or (b) the prequel to more interesting, significant, and revealing stories, hinted at but not truly told.

One is the story of how Mo Farah moved from Africa to England, chose to relocate in Eugene to train with Alberto Salazar at the Oregon Project, and then captured the admiration, adulation and hearts of the citizens of his chosen country, by winning two prestigious Olympic events, known as the Woolworth Double, after the tag line for the five-and-dime retain chain by that name.

Another is the extraordinary story of Galen Rupp, identified and adopted by Alberto Salazar as his protégé, at the same age that Alberto started training with Billy Squires at the Greater Boston Track Club, benefiting from the lessons learned by his teacher and racing to the silver medal in London in the 10,000 meters, thereby achieving the promised redemption of American distance runner.