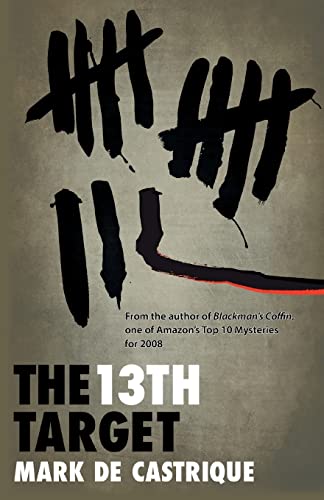 Some blame the Fed for causing our nation’s money woes and wish for the dissolution of the institution. Others feel the Fed is actually run by a secret cabal of foreigners who are skimming American money and sending it to other countries, perhaps even third world dictators.

Conspiracies abound, both in real life and in The 13th Target.

The author creates a likeable protagonist in Rusty Mullins, a former Secret Service agent who pulls the pin after losing his wife to cancer. In a sense, Mullins trades one protection job for another, hiring on with a private protection firm.

The problems begin when Rusty’s designated protectee, a high-ranking Federal Reserve executive and chief liaison with the U.S. Treasury, is found dead, ostensibly by suicide.

Mullins’ law enforcement instincts kick in, and he soon begins an investigation of his own into the alleged suicide. He digs around and discovers his charge was murdered. That conclusion results in a complicated conspiracy threatening Rusty, his family, and the authorities at the Fed, as well as politicians in Washington, D.C.

An interesting diversion occurs when the author involves a novelist in this sizzling story. An internationally acclaimed thriller writer, the character piques the readers’ interest, but doesn’t distract from the main story.

For the most part, every twist and turn in The 13th Target is a surprise. Nothing is too predictable, and the ending is very satisfying and unexpected—a key element to a good thriller.

One distraction involves the author using the term “clips” on a couple of occasions when referring to a pistol’s magazine. He also wrote that the Glock pistol that Mullins carries has a safety; it does not. Will these two inaccuracies distract the reader? For someone who knows weapons, it might give pause.

Other than that flub, the author grabs the reader from the first chapter. He includes contemporary issues, and places much of the action in Virginia and D.C., the heart and soul of politics and conspiracy theories. The author also included a one-time newspaper reporter in his cast of characters—a nice touch that ratchets up the suspense.

The 13th Target is a well-constructed story and an exciting read. Mr. de Castrique does not leave any loose ends, resolving every issue and paying off every clue before the story’s conclusion. That’s the mark of a good writer.

The 13th Target will create a host of new fans for the author. I’m hoping he reprises Rusty Mullins’ character in another political thriller. It’s a winning formula.