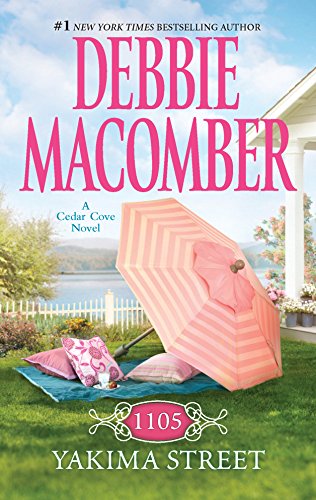 “Ms. Macomber skillfully captures her audience’s attention throughout 1105 Yakima Street by sharing the joys, sorrows, and intimate details of her many diverse and fascinating characters.”

Once again, we visit the residents of Washington, in Ms. Macomber’s latest edition of her Cedar Cove series—Cedar Cove, the quintessential small town with amiable, compassionate residents.

1105 Yakima Street delves into the relationship of Bruce and Rachel Peyton, a couple who became friends several years before. Bruce’s daughter Jolene befriended Rachel as a child, when Rachel cut her hair at Get Nailed, the beauty shop where she works. Jolene’s mother died in an accident and, Rachel, having lost her parents at a young age, commiserates with the child. With something in common, their bond is immediate.

Things go well until Rachel and Bruce become close and decide to marry. By now, Jolene is a young teen and does everything in her power to thwart her father’s relationship. Becoming sullen, mean spirited, and jealous of the attention Bruce shows Rachel, Jolene wants her father to herself. She manages to drive Rachel away, even though Rachel is now pregnant.

Bruce, being a pushover, lets his daughter dominate the situation—though he agonizes over Rachel’s departure. Though Rachel loves Bruce, she is determined not to return until he can get his daughter to come to terms with their marriage and accepts her as her stepmother.

Meanwhile, when Charlotte and Ben Rhodes’ home catches on fire, Charlotte’s daughter Olivia, a well-respected judge in Cedar Cove, fears her mother and stepfather are sliding into Alzheimer’s. She and her brother, Will, local gallery owner, need to decide how to handle this touchy situation. Charlotte is their mother, but they are now in the position where the roles are reversed. The usual ornery and take-charge Will, accedes to his sister’s suggestions, for he is too busy agonizing over his employee, Miranda, who drives him to distraction.

Beth Morehouse, local dog trainer, implores librarian Grace Harding, to care for a puppy in a litter whose mother died. Grace adamantly refuses, swearing she will never allow another pet to steal her heart, after losing her dog, Buttercup. Meanwhile, she does accept the pup on a temporary basis with the supposition her husband, Cliff, does not become attached.

Several other townsfolk, well known from previous novels in the series, are also presented and followed through the story. Ms. Macomber skillfully captures her audience’s attention throughout 1105 Yakima Street by sharing the joys, sorrows, and intimate details of her many diverse and fascinating characters.