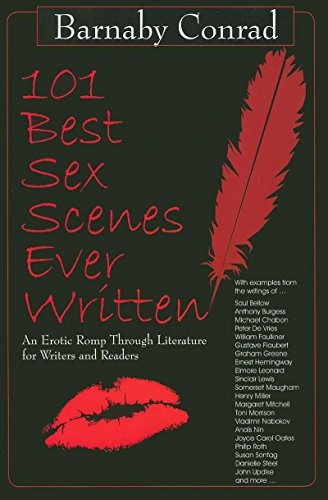 Whether readers share Barnaby Conrad’s literary tastes could well be a generational matter. Not withstanding the word Ever in its title this collection of prose fiction excerpts (poems, plays, screenplays, essays, and nonfiction memoirs are not represented) excludes all of Western literature preceding the 1857 publication of Flaubert’s Madam Bovary, all non-Western literature regardless of epoch, and descriptions of consensual non-heterosexual couplings (though the same sex rape scene from James Dickey’s novel Deliverance is included). Most of the quoted excerpts are from the first two thirds of the 20th century preceding the sexual revolution and second wave feminism.

To readers who came of age since those two enormous societal shifts, especially those of us who reached adulthood before the onset of the AIDS epidemic and the new Puritanism that accompanied the Reagan administration in the 1980s, these excerpts provide a window into intimate relations between the sexes in a bygone era not unlike the television show “Mad Men,” and from them readers can infer that back then an adult heterosexual was considered sexually experienced if he or she was not embarrassed being naked in the company of a member of the opposite sex. Expectations were so low and ignorance so common that knowledge of the opposite sex’s anatomy and how to pleasure one’s partner, much less actual experience doing so, appear not to have been on prospective partners’ checklists nor on those of writers and readers. Contemporary fictional heroines who are as confident, competent, and accomplished in the bedroom as they are in their professional lives were unheard of as recently as half a century ago.

Mr. Conrad’s introductory chapter surveys the recent history of sexual literature and its publication, including several landmark obscenity trials. But rather than seeing this history as a springboard for the further expansion of the boundaries of literary sexual expression (or, as he might put it, the boundaries of good taste), like the Creator God of Genesis, Mr. Conrad seems content to declare that the current status quo is good and to rest.

An adjective Mr. Conrad frequently applies to his chosen excerpts is “tame” (including a chapter entitled “Tame But Good,” and in a later chapter, “Pretty tame stuff, considering it’s from The Mailer”), which tells us something about his literary taste and may indicate an antipathy to his topic. Why does he spare us Norman Mailer’s hotter sex scenes? Mr. Conrad introduces the Henry Miller excerpt thusly: “I have always found Henry Miller to be gross, and unbearably crude,” but to my eye and ear it is not the sex in the nearly two-page-long excerpt from Tropic of Capricorn that is gross or crude but Mr. Miller’s antiSemitism; Mr. Conrad has nothing to say about that. If Mr. Conrad thinks Mr. Miller is gross and crude one can only imagine what he thinks of Charles Bukowski—none of whose sex scenes are excerpted in this book.

Of the book’s 101 excerpts, my three favorites are the page long paragraph from D. H. Lawrence’s Lady Chatterley’s Lover that begins with the sentence “He too had bared the front part of his body and she felt his naked flesh against hers as he came in to her;” an excerpt from Mary Gordon’s 1998 novel Spending, in which her first-person female narrator describes receiving cunnilingus; and a couple of excerpts from Edmund Wilson’s 1946 novel Memoirs of Hecate County, a book that like Lady Chatterley’s Lover was the subject of an obscenity trial. In all three the quality of the prose wins me over.

In the final chapter Mr. Conrad concludes that sex scenes are “not really obligatory unless your name is Henry Miller or Jackie Collins.” He advises writers who do chose to write sex scenes to maintain their characters’ humanity and to use language appropriate to the story and its characters. He considers Anton Chekov’s “The Lady With the Dog” the perfectly tasteful love and sex story, one that “is too good and totally of a single piece to violate by excerpting any part of it.”

Readers who, on the other hand, are fond of Henry Miller and Charles Bukowski will probably enjoy the short novels of Francis Levy whose 2008 Erotomania explores the courtship, marriage, therapy, and recovery of a sex addicted couple, and whose Seven Days in Rio with its sex tourist protagonist is forthcoming in July 2011 (as is its New York Journal of Books review).